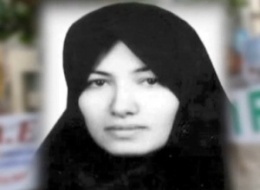 (CNN) — The son of an Iranian woman who faces execution by stoning appealed to Iran’s courts Wednesday in hopes of sparing his mother’s life.

A lawyer for Sajjad Mohammedie Ashtiani traveled to Tehran to persuade judiciary officials to commute the sentence of Sakineh Mohammedie Ashtiani, who was convicted of adultery and condemned to death by stoning, a method deemed barbaric by human rights activists.

Sajjad Ashtiani also penned a new open letter to the international community in which he points out the legal discrepancies of his mother’s case.

The letter comes after a human rights activist Mina Ahadi told CNN that only an international campaign designed to pressure the Islamic regime in Tehran could save Sakineh Ashtiani’s life.

“Legally, it’s all over,” said Ahadi, who heads the International Committee Against Stoning and the Death Penalty. “It’s a done deal. Sakineh can be stoned at any minute.”

But Sajjad Ashtiani refuses to give up.

In freshly penned letter, he wrote there was neither evidence nor legal grounds for his mother’s conviction and sentence. He said the family has traveled six times from their home in Tabriz to Tehran to speak with Iranian officials, but in vain.

“So I have no option but reaching out to them this way,” he said.

Why, he asked, has an accused been twice prosecuted on the same charge when Islamic criminal law allows prosecution only once?

Sajjad Ashtiani told CNN that he visits his mother every Monday in jail, never knowing whether that meeting will be their last.

If the sentence is carried out, Sakineh Ashtiani, 42, will be buried up to her chest, according to an Amnesty International report citing the Iranian penal code. The stones that will be hurled at her will be large enough to cause pain but not so large as to kill her immediately.

She was convicted of adultery in 2006 and forced to confess after being subjected to 99 lashes, human rights lawyer Mohammad Mostafaei told CNN. She later recanted that confession and has denied wrongdoing.

Her conviction was based not on evidence but on the determination of three out of five judges, Mostafaei said. She has asked forgiveness from the court but the judges refused to grant clemency.

The circumstances of Ashtiani’s case make it not an exception but the rule in Iran, according to Amnesty International, which tracks death penalty cases around the world.

“The majority of those sentenced to death by stoning are women, who suffer disproportionately from such punishment,” the human rights group said in a 2008 report.

Ahadi, who herself fled a death sentence in Iran in the early 1980s, told CNN that pressure from Amnesty and other organizations and individuals is likely the only way to save Ashtiani.

“Experience shows [that] … when the pressure gets very high, the Islamic government starts to say something different,” she said.

In Washington, the State Department has criticized the stoning sentence, saying it raised serious concerns about human rights violations by the Iranian government.

The anguish for Sajjad Ashtiani and his sister, Farideh, was clear last week in an open letter circulated on websites, Facebook pages and through human rights organizations.

“I am just fighting for what is right,” he said. “My mother is a housewife, a good person, a caring mother. His anguish surfaced again in the new letter released Tuesday in which he asked Iranian officials to pardon his mother.

“I hope that you see to it that justice in my mother’s case prevails,” he said. “I have now said all that should have been said; my mother and I are asking the people of the world to help us, and are deeply grateful for what has been done thus far.”