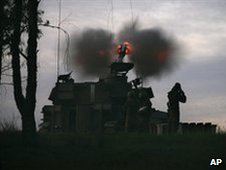 The Israeli military has announced it will charge an army sniper with killing a person during the Gaza offensive, when hundreds of Palestinians died.

It said there were grounds for trying the staff sergeant for manslaughter in a military court.

Evidence was found that the soldier had opened fire as the victim walked with a group of people waving a white flag.

So far, Israel has only punished two other soldiers for their actions during Operation Cast Lead in 2008-09.

A brigadier general and a colonel were reprimanded for authorising an artillery attack which hit a UN compound in Gaza, the army said in February.

The Military Advocate-General (MAG), Maj Gen Avichai Mendelblit, also announced that disciplinary action had been taken against a battalion commander accused of using a Palestinian civilian as a “human shield” and against a commander who had ordered an air strike in which civilians inside a mosque had been injured.

“After reviewing the evidence, the Military Advocate General ordered that an IDF staff sergeant be indicted with charges of manslaughter by a military court,” the army said.

“This decision is based on evidence that the soldier, who was serving as a designated marksman, deliberately targeted an individual walking with a group of people waving a white flag without being ordered or authorised to do so.”

The BBC’s Wyre Davis in Jerusalem says that the Israeli offensive against Gaza, which began at the end of 2008, was notable for its severity and the fact that, according to the UN, more than 1,300 Palestinians were killed compared to fewer than 20 Israelis.

But the military campaign was criticised internationally and the UN Goldstone Report found that Israel had used disproportionate force – a conclusion rejected by the Israeli government.