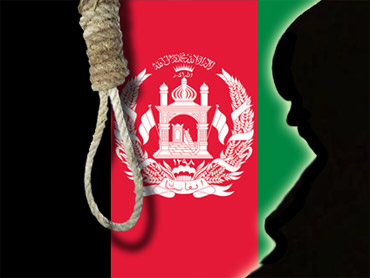 Provincial government spokesman Daud Ahmadi confirmed the incident which took place on Tuesday in the Taliban stronghold of Sangin, in Helmand. Ahmadi told CBS News’ Fazul Rahim the boy was hanged in public after a Taliban commander read a verdict out loud, accusing the youth of spying for international forces.

Afghan President Hamid Karzai said Thursday that, if confirmed by his national government, the hanging would be “heart breaking and shocking.”

Karzai spoke in Kabul at a joint news conference with Britain’s new Prime Minister David Cameron, who was in town for his first visit as head of state. Cameron said the alleged hanging would be a “horrific crime… a crime against humanity,” if proven.

A local resident in the remote village of Sang e Hissar, in the Sangin valley, tells CBS News he witnessed the hanging. The man says three militants brought the boy before a crowd of about 150 people, read the short verdict, and then hanged him from a tree.

The youngster was the grandson of a respected local elder, the resident tells CBS. According to the villager, the Taliban have intensified their campaign of intimidation in the area in recent months.

A Taliban source in Helmand told CBS News’ Sami Yousafzai on Thursday he was aware of the boy being killed, but that it was a case of a militant settling a personal vendetta against the boy’s family, then using the spying charges as an excuse. The source said he believed the boy’s executor had fled across the border to Pakistan.

The hanging comes as a Taliban commander in neighboring Kandahar province — the Taliban’s traditional home territory — tells CBS News that a suicide attack on a wedding party that left 40 people dead was “collective punishment” for villagers standing up to the Islamic militants’ control in the region.