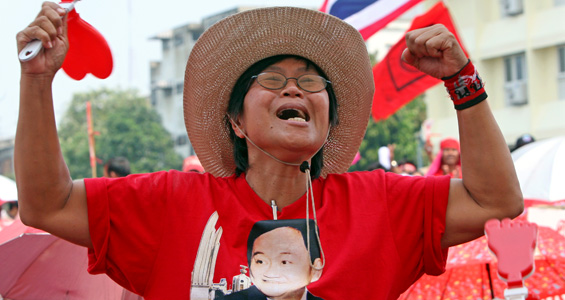 The red shirts have become a powerful player on the political stage. They cannot be ignored anymore,” says Michael Nelson, a German academic who has written on Thai political parties.

“Nobody would have imagined in the early 1990s that the rural people who are red shirt supporters today would have come out to show their political strength.”

“They were never considered an important factor in previous years as a group that will assert their political views,” he says. “They were totally quiet.”

The blood ‘donation’ protest followed an earlier march by thousands of red shirts to a military camp where Abhisit had taken refuge during the protests. They had given the prime minister a noon deadline to dissolve the parliament and call for new election.

But Abhisit stood firm. “This government was set up and backed by a majority of MPs (members of parliament) in accordance with the constitution, the same way as the previous two Cabinets,” he said, to justify why the dissolution of parliament was not the answer to Thailand’s political problems. 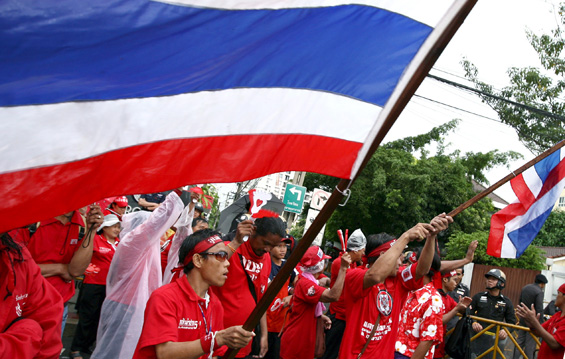 But his words have had little impact on the protesters, whose supporters from the rural north and north-east and Bangkok and its suburbs have lost faith in the political system due to the manner in which Abhisit emerged as premier some 15 months ago.

The ruling coalition was cobbled together by a deal shaped by the country’s powerful military in an army camp in December 2008, rather than through a popular mandate at a general election.

It followed a controversial court ruling that led to the dissolution of a political party backed by the fugitive former prime minister Thaksin, which had won the general election in 2007.

The triumph of the military-backed Abhisit administration over Thaksin’s allies was the second time that voters who supported Thaksin, many of whom are UDD cadres, saw their elected party forced out through non-electoral means.

The first moment of disenfranchisement came during the 2006 coup, the country’s 18th putsch.

Thaksin, who is living in exile to avoid a two-year-jail term for corruption, remains widely popular among voters in the rural north and north-east due to a raft of pro-poor policies he implemented during his five-and-a-half- year term in office.

The former telecommunications tycoon has since emerged as the political godfather of the UDD. 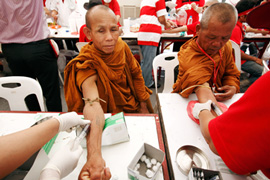 Despite the heavy odds they face, UDD supporters like Parada Cinghin, who was among the nearly 80,000 men and women from the rural north and north-east who rode to Bangkok last week in an unprecedented convoy of red, are prepared to stay the course to “restore Thai democracy through elections, not with the military’s help.”

“I slept for three nights on the street to show my support,” said the 60-year-old grandmother who had served in diplomatic postings for the Thai foreign ministry. “There are others like me here who gave up the comfort of our air-conditioned homes to do this for the first time.”

“We are prepared to stay longer if we must,” added Parada, who lives in the north-eastern province of Nakhon Ratchasima. “If we cannot get the government out this time, we will try again.”

Analysts who have followed the latest street protests of the red shirts agree with the sentiments voiced by Parada.

“What we are seeing is a very impressive show of numbers, faces and emotion that is not going to disappear,” says Chris Baker, a British academic who has written extensively on Thailand.

“It shows that Thailand’s political community has expanded to include a large number from the rural areas.”

“There is no easy ending; no final battle going on,” says. “This is a continuation of a trend caused by the coup, because for a large number of people parliament has lost its legitimacy.”