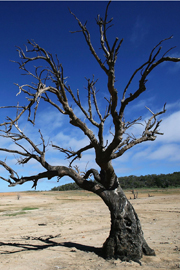 The state’s unemployment rate stands at more than 12 percent, and in some poorer counties it’s in the 25 percent range. In Los Angeles, that number is 12.2 percent. “It boggles the mind,” says LA’s mayor, Antonio Villaraigosa. “Not since the Depression have we had numbers this bad.” To make matters worse, in an attempt to slow the state’s fiscal implosion, halfway through 2009 Sacramento forcibly borrowed billions of dollars from city coffers statewide. “They took our community redevelopment dollars that are capital we need to create jobs and housing in this town,” the mayor argues.

The network of public universities, long the country’s most prestigious state-supported higher education system, is wilting. The state’s schools, starved of money from a combination of thirty-year-old local property-tax revolts and the more recent budget implosion, are rapidly sinking into what can only charitably be called mediocrity.

There’s a Mad Max feel to daily life in many neighborhoods. The Central Valley has a swath of cities whose home foreclosure rates rank in the top ten in the country. Friends looking to buy a home in a poor part of Sacramento tell me of foreclosed houses stripped of their copper wires, their toilets, their pipes, even their drywall. An ex-student reports visiting homes in which furious foreclosed owners and evicted tenants have urinated and defecated on the carpeting, abandoned pets to starve, left kitchens filled with rotting food. Sure, you can buy these properties for next to nothing, but you’ll have to bring in the biohazard squads before you can safely occupy them.

University departments looking to pinch pennies are removing their professors’ office phones. Judges in some counties have donated a percentage of their salaries back to the courts so that the courts will have enough money to stay open. And on furlough Fridays, downtown Sacramento–the capital city of the world’s eighth-largest economy–is practically a ghost town. The restaurants are empty, the streets quiet. Nobody’s at work.

Why this has happened, how the mess can be cleaned up, how big-picture fixes to a discredited political machine can be implemented–well, that’s all up for debate. Political consensus is as rare a commodity in California these days as baseball-sized gold nuggets were after the forty-niners had picked the mountains clean. Practically the only thing conservatives and liberals agree on in Sacramento is that the decision-making system has stalled and that the state leadership’s ability to implement long-term strategic plans in the face of economic crisis has been corroded in recent years. California, historically the country’s most populous, wealthiest, most dynamic state, has become chronically anxious about its future. Its citizens have grown distrustful of those who govern them, increasingly aware that ineptitude is making a bad economic situation worse. Recent polling suggests only 13 percent of voters approve of the job their state legislators are doing.