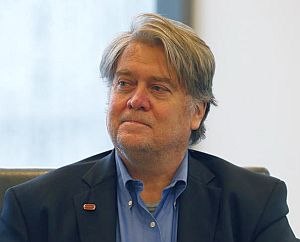 Analysts agree this was a landmark turning point that showed that even independent of President Donald Trump, the Trump-originated populist, economic-nationalist agenda he ran on in 2016 has now eclipsed the president as a political figure. Wrapped in the mantle of this agenda, Moore was able to handily defeat establishment/globalist- aligned Strange in a contest that many observers say has strong portents for the midterm elections of 2018 next year.

Helping to promote the candidacy of Moore was none other than former White House Chief Strategist and current Breitbart News Executive Chairman Steve Bannon, who spoke last Monday night inside a barn 25 minutes from Mobile, Alabama to a rapt crowd. Bannon was joined by UK Independence Party leader Nigel Farage and Duck Dynasty patriarch Phil Robertson.

“Your day of reckoning is coming,” warned Bannon, indicating that the Republican elites who had contributed approximately $30 million to Strange — roughly 10 times the amount that Moore ran on — were on notice that a sea change was taking place within the Republican Party. “Tomorrow’s going to decide who has sovereignty in the United States of America,” Bannon boomed. “Is it the elites in D.C. with their money, or is it the people in Alabama with their muscle?” Bannon said the Republican donor class thought Alabamians could be won over if the former group only spent enough money on 30-second advertisements for Strange.

For Senate Majority Leader Mitch McConnell and his allies, Bannon had a starker message. “For Mitch McConnell and Ward Baker and Karl Rove and Steven Law — all the instruments to try and destroy Judge Moore and his family: your day of reckoning is coming. More importantly, for the donors who put up the money and the corporatists who put up the money — your day of reckoning is coming too.”

Bannon stopped to define these elite officials he was calling out by name.

And indeed, voters did just that the following day, delivering a decisive victory for Moore over Strange and sending shock waves back to the Republican establishment in Washington, D.C. Immediately, it was noted that other GOP Senate incumbents might choose not to run when faced with the prospect that they, too, could be challenged by a populist opposition candidate in the mold of Moore, who has threatened to shake things up if and when he does land in his state’s Senate seat in Washington.

Already, Republican Senator Bob Corker of Tennessee had backed Strange, but then had to explain why he owned a stake in a commercial Alabama real estate development arranged for him by a law firm that donated large amounts to Strange’s campaign. Abruptly, Corker announced he wouldn’t seek reelection in 2018. There are already murmurings that popular Tennessee Congresswoman Marsha Blackburn may run for his seat.

Other establishment Republicans who are said to be rethinking their prospects include Senators Dean Heller of Nevada, Jeff Flake of Arizona and Roger Wicker of Mississippi.

The same evening that Bannon spoke to the crowd near Mobile, he gave a rare interview to Fox’s Sean Hannity. Bannon told Hannity that he wears the “contempt” he believes the elite establishment has for him “like a badge of honor.” Bannon related to Hannity that the runoff between Strange and Moore was a “referendum on the Party of Davos [Switzerland, home of the elitist World Economic Forum] and the elites in Davos and Washington, D.C. that Mitch McConnell is the face of.”

Bannon said that Alabamians would ultimately decide “if sovereignty rests with the people, or with the money,” and that the runoff was a clash between the “muscle of the grassroots” and the “money of a corrupt and incompetent permanent political class that rules Washington, D.C. like a new aristocracy.”

“The elites represented by Mitch McConnell hold me in contempt. They think I’m a bad guy. They think I’m a dangerous guy,” claimed Bannon. It was these elites that Bannon said were helping to “destroy the country” and were “allow[ing] economic hate crimes against the working men and women in the heartland of this country [to occur].”

“The factories went to China, and the drugs came in,” continued Bannon, referring to the ongoing crisis of opioid addiction that’s threatening our country. “We’ve got to stop it.”

Bannon reminded Hannity’s viewers that Moore was taking Trump Attorney General Jeff Sessions’ seat, and called Sessions someone who had “a pure heart” who was “as tough as boot leather.” Bannon said he further believed that Moore was “another righteous man” in the mold of Sessions and that he hoped that Moore can overcome Democrat Jones in December.

But Bannon’s message resonated far beyond the crowd in Alabama. Other regional politicians, like former Mississippi state Senator Chris McDaniel, believe “[The populist agenda] is going to be a determining factor for a lot of Deep South states, no question. If Alabama can send a true conservative to Washington, and Texas can send a true conservative to Washington, so can Mississippi and Tennessee and Florida and other states.” McDaniel hinted that a victory by Moore might inspire him to run for higher office in 2018.

Florida state representative Mike Hill, who backed President Trump in 2016, was of the opinion that “[Moore’s victory] will embolden a lot more people who are conservative, that have conservative values, to step forward and say, ‘let’s start turning this thing around,’; it could have a ripple effect.”

Andy Surabian, senior advisor to the Great America Alliance conservative advocacy group, stated, “The opposition party does not understand Middle America… If you can defeat a guy like Luther Strange by simply tying him to Mitch McConnell, what does that mean for guys like Jeff Flake and Dean Heller, who are literally #NeverTrumpers, or a guy like Roger Wicker, who’s in Senate leadership? I hope none of them have a long-term lease in Washington D.C.”

Eric Beach, who co-chairs the Alliance with Surabian, summed up the message Alabama voters delivered as even simpler: “Establishment, beware — we’re coming for you in 2018.”