HOW MANY CIVILIANS WOULD BE KILLED IN ATTACK ON IRAN NUCLEAR SITES…. 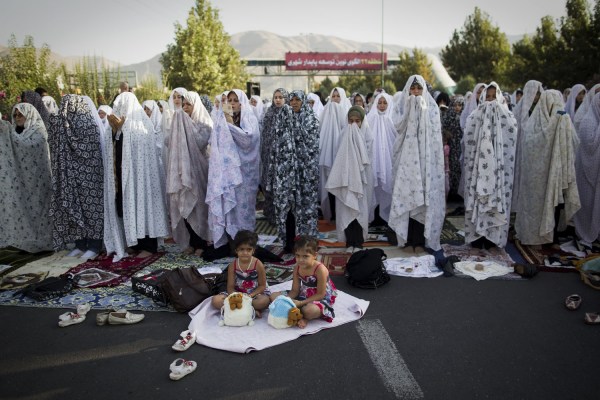 Iranian twin sisters sit in front of worshippers performing ‘Id al-Fitr prayers to mark the end of the holy month of Ramadan in the Olympic Village neighborhood of western Tehran on Aug. 19, 2012

For Iranians these days, life under economic sanctions is a crescendo of hardships. With the Iranian currency at an all-time low against the dollar, shortages of essential medicines and quadrupling prices of basic goods like shampoo and bread, a sense of crisis pervades daily life. Now Iranians are worrying about one more thing: imminent death from an American or Israeli military strike.

With talk of an attack growing more feverish by the day, the mood is unsettled as never before. In their fear and worry, Iranians say they feel alone, stuck between a defiant government that clings to its nuclear ambitions and a world so unattuned to their suffering that the fatal consequences of a strike on the Iranian people has so far been totally absent from the debate. “We are close to reliving the days of the Iran-Iraq war, soon we will have to wait in line for everyday goods,” says a 60-year-old, middle-class matron from Tehran. “Things are getting worse by the day,” says a 57-year-old Iranian academic preparing to emigrate to North America. “It is better to get out now while it’s still possible.”

While Iranians are increasingly fretful of an imminent attack, they remain broadly unaware of just how devastating the human impact could be. Even a conservative strike on a handful of Iran’s nuclear facilities, a recent report predicts, could kill or injure 5,000 to 80,000 people. The Ayatollah’s Nuclear Gamble, a report written by an Iranian-American scientist with expertise in industrial nuclear-waste management, notes that a number of Iran’s sites are located directly atop or near major civilian centers. One key site that would almost certainly be targeted in a bombing campaign, the uranium-conversion facility at Isfahan, houses 371 metric tons of uranium hexafluoride and is located on the city’s doorstep; toxic plumes released from a strike would reach the city center within an hour, killing or injuring as many as 70,000 and exposing over 300,000 to radioactive material. These plumes would “destroy their lungs, blind them, severely burn their skin and damage other tissues and vital organs.” The report’s predictions for long-term toxicity and fatalities are equally stark. “The numbers are alarming,” says Khosrow Semnani, the report’s author, “we’re talking about a catastrophe in the same class as Bhopal and Chernobyl.”

Beyond those initially killed in a potential strike, the Iranian government’s lack of readiness for handling wide-scale radiation exposure could exponentially raise the death toll, Semnani says. His study, published by the University of Utah’s Hinckley Institute of Politics and the nongovernmental organization Omid for Iran, outlines Iran’s poor record of emergency response and notes that its civilian casualties from natural disasters like earthquakes have been far greater than those suffered during similar disasters in better prepared countries like Turkey. With virtually no clinical capacity or medical infrastructure to deal with wide-scale radioactive fallout, or early warning systems in place to limit exposure, Iran would be swiftly overwhelmed by the aftermath of a strike. The government’s woeful unpreparedness remains unknown to most Iranians. “This issue is a redline, the [Iranian] media can’t go near it,” says Jamshid Barzegar, a senior analyst at BBC Persian. “To talk about this would be considered a weakening of people’s attitudes. The government only speaks of tactics and resistance, how unhurt Iran will be by an attack.”

But if the aftermath of a war remains murky to most Iranians, their anticipation of its inevitability is growing. The commander of Iran’s Revolutionary Guards, Mohammad Ali Jafari, told Iranians last week that “we must all prepare for the upcoming war.” His warning, the bluntest yet by a senior official, that Iran and Israel would enter a “physical conflict,” has raised expectations of an attack among Iranians, who are typically accustomed to dismissing such talk. When reformist MP Mohammed Reza Tabesh criticized Jafari’s remarks in parliament, the hard-line majority shouted him down with cries of “Allahu Akbar.” “When people see their top military commander and officials speaking of the inevitability of war, the belief sinks in,” says Barzegar.

Whether Iranian officials actually think Israel is closer to launching an attack than it has been in the past, or their readiness rhetoric is meant to convey their own unflappability, the Iranian public is left with greater uneasiness and less real information than ever. Sterile media speculation in Israel and the U.S. ignores the question of civilian casualties, portraying an attack on Iran as a tidy pinpoint strike like those Israel has carried out against Iraq and Syria. Iran, for its part, claims the number of casualties it might sustain will be tolerable. “Hawks on both sides, Israel and the United States, and Iran, want to underplay the level of casualties,” says Ali Ansari, an Iran expert at Scotland’s University of St. Andrews. “But both sides are wildly wrong, there will be quite devastating consequences. It will be a mess.”