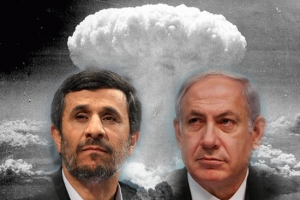 In March 1973 the Israeli prime minister Golda Meir visited US president Richard Nixon in Washington. He told her that the Egyptian president Anwar Sadat was prepared to negotiate a full treaty, and Meir assured him that Israel wanted peace, but that she would prefer an interim agreement as Cairo was not to be trusted. She said Egypt’s primary aim was to force Israel to withdraw to the line of 4 June 1967, then resurrect the UN plan for the partition of Palestine that had been adopted in 1947; a solution to the problem of Palestine would have to be discussed with Yasser Arafat and “the terrorists”.

Israeli journalist Aluf Benn reported this conversation, on the basis of documents disclosed by Wikileaks, and drew a parallel between the situation then, when Israel’s refusal to negotiate led directly to war and to Egyptian troops crossing the Suez Canal in October 1973, and prime minister Benyamin Netanyahu’s current evasive response to President Barack Obama. Benn notes that Netanyahu, who returned from the US and rushed to the front in October 1973, “would do well to refresh his memory by listening to the tape of Meir and Nixon and asking himself what he can do to avoid repeating her mistakes and keep from dragging the country blindly toward a second Yom Kippur disaster” (1). In that war the Israeli army lost 2,600 troops.

Israel’s refusal to accept Obama’s proposal to halt settlements on the West Bank (but not in East Jerusalem) for three months in return for unprecedented promises – or bribes, according to columnist Thomas Friedman (2), who is not known for sympathy to the Arabs – confirmed that Obama is unable to exert any real pressure on Israel and that Netanyahu rejects any compromise. Netanyahu, like his predecessors, claims to want peace but he wants the humiliating peace imposed by conquest and based on denial of Palestinian rights. In secret negotiations over the past year, he has repeatedly told the Palestinians they had to accept Israel’s “security concept”, keeping Israeli troops stationed in the Jordan valley along the “barrier” (on the Palestinian side) and the occupation of a substantial part of the West Bank (3). He did not say how long the occupation would last.

This deadlock is forcing the Israeli army to draw up plans for further wars based on the “security concept” – that anyone who refuses to accept Israel’s rule in the region is a “terrorist” to be eliminated. No other country, not even the US, has such a comprehensive security concept, which means that Israel is permanently at war. Who will the Israeli army attack next? Gaza? Two years ago Israeli tanks and aircraft reduced buildings to rubble and killed hundreds of civilians in what the Goldstone report describes as “war crimes” and probably “crimes against humanity”. But Hamas is as strong as ever. How long will Israel tolerate this? Lebanon? In July-August 2006, the Israeli army failed to bring down Hizballah but succeeded in destroying the country; Hizballah is now stronger than ever and the Israeli high command cannot rule out the possibility of a major operation and occupation of part of Lebanon (4). Iran? At the risk of starting a major conflict from Iraq to Lebanon, Palestine to Afghanistan?In the Middle East unrest inevitably leads to war. This time, unlike 1973, Israel would take the first direct step, but it will face far more effective enemies and, as Israeli peace campaigner Uli Avnery points out, the hostility of world public opinion (5). Brazil, Bolivia and Argentina have recognised the Palestinian state within the pre-1967 borders and there has been a letter from 26 European elder statesmen (including Chris Patten, Giuliano Amato, Felipe Gonzáles, Lionel Jospin, Hubert Védrine, Romano Prodi, Javier Solana), who are anything but extremists, calling on the European Union to impose sanctions if the Israeli government has not reviewed its policy by the spring. Human Rights Watch published a report on 19 December (Israel/West Bank: Separate and Unequal) about the systematic discrimination against Palestinians, calling on the US government to withhold US funding from the Israeli government equivalent to expenditure on settlements (more than $1bn).

Avnery concludes: “Somebody wrote this week that America’s support of Israel is a case of assisted suicide. In Israel, assisting suicide is a crime. Suicide itself, however, is allowed by our laws. Those whom the gods want to destroy, they first make mad. Let’s hope we recover our senses before it is too late.”