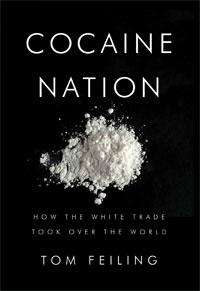 In March 2008, the United Nations’ World Drug Report confirmed that the price of cocaine in Europe had fallen to a record low, fuelling record levels of cocaine use. “Celebrity drug offenders can profoundly influence attitudes, politics, values and behavior towards drug abuse, particularly among young people,” the report warned. The United Nations blamed this on “celebrity culture” and even accused the police of turning a blind eye to the rich and famous misusers of the drug.

High-profile drug casualties, like the singers Pete Doherty and Amy Winehouse, and the model Kate Moss, vie for space on the front pages of Britain’s tabloids and broadsheets alike with ever-larger drug seizures. In writing this book, I didn’t want to get swept up in the all-too familiar mix of nosiness, envy and sanctimony that masquerades as the “public interest,” or the ritual inflation and deflation of mediocrity that passes for “celebrity news.” I have not sought the opinions of commentators, politicians or the drug-taking anecdotes of high-rollers. Instead, I wanted to hear from those who work day to day on the cocaine trade routes that run from London and New York via Miami, Kingston and Tijuana to Colombia. I wanted to see the impact of the war on drugs on the consumers, traders and producers of cocaine, and the impact they have on the soldiers, police officers, customs officials and doctors charged with prosecuting the war. I wanted to bring the tight-lipped mechanics who keep the cocaine economy ticking over on to the stage.

In 2002, I spent a year working in Colombia, at the end of which I made a documentary called Resistencia: Hip-Hop in Colombia. After a screening at a film festival in Bogota, a Colombian told me that she was surprised but glad to see that a foreigner had made a film about her country that made no mention of the cocaine trade. Cocaine seemed to be the only thing that outsiders knew or wanted to know about Colombia, she told me, and their depictions of the business invariably ended up trading in stereotypes. Colombia is a fascinating and beautiful country and its tourist board will no doubt be happy to read that I would recommend a holiday there to anyone. But they probably won’t enjoy reading anything else I have to say about their country in this book. Colombians argue that their country is not the only cocaine-producing country in the Andes, that business exists only because of strong demand for cocaine in Europe and the United States and that no country has paid such a high-price for cocaine as theirs. But no other country is as well suited to cocaine production as Colombia. Most commentators never consider why this might be, for while the cocaine business, the war on drugs, and Colombia’s civil conflict are tangled and confusing, once prised apart, it is shocking how oblivious each player is to the others. Attitudes, policies and institutions seem to function quite independently of one another. This incoherence is not particular to Colombia: it is characteristic of the anti-drug strategies worldwide.

When I moved back to London from Bogota, everybody seemed to be complaining about stress, information overload and how expensive everything had become. Why then, I wondered, did sizeable numbers of Londoners regard the strongest stimulant known to mankind as suitable Friday-night entertainment? Expensive, energizing, esteem-boosting, inclining its users to delusions of grandeur and paranoia in equal measure, cocaine seemed to have become the perfect accompaniment to twenty-first-century life. In 1903 the British Committee on the Acquirement of Drug Habits described cocaine users as typically “bohemians, gamblers, high and low-class prostitutes, night porters, bell-boys, burglars, racketeers, pimps and casual laborers.” By 2008, cocaine had become ordinary. Indeed, its ordinariness was what most perturbed the authorities. According to The Times, “police say privately that cocaine is becoming as acceptable in middle-class Britain as cannabis was a generation ago and that they are losing their battle against the drug.” On his first day as Commissioner of the Metropolitan Police in February 2005, Sir Ian Blair informed the waiting press pack that “people are having dinner parties where they drink less wine and snort more cocaine.” In fact, they were drinking more wine and snorting more cocaine. The exotic newcomer cocaine is more often than not consumed in conjunction with alcohol. The two combine in the liver to producer coca-ethanol, a whole new buzz which stays active for twice as long as cocaine.

“I’m not interested in the harm it is doing to them personally,” the new Commissioner of Police went on, “but the price of that cocaine is misery on the streets of London’s estates and blood on the roads to Colombia and Afghanistan.” The Commissioner’s words echoed those of Nancy Reagan, who in 1988 warned that “if you’re a casual drug user, you’re an accomplice to murder.” Critics of recreational drug use find themselves in a quandary. Without a social problem to crack down on or helpless victims to whom they might extend their help and compassion, they can only articulate their objections to certain mind-altering substances by invoking the misery that has been caused by driving drug use underground. The source of the problem, it would seem, is the desire for luxury. Cocaine has long been familiar and acceptable to the wealthy and famous. Young British people, aspiring to both wealth and fame, are paying for and enjoying cocaine as ever before. Cocaine consumers, whether middle class, working class, or lower upper middle class take flack for being uncaring and self-congratulatory, but office work, profligate consumption and a weekly mash-up to make sense of it all have become defining features of life and style.

Feiling argues that the so-called war on drugs has been an abject failure — and that it’s time to take decriminalization seriously.

Though Feiling has friends who have suffered from cocaine addiction, he doesn’t think that the marginalization and criminalization of their behavior helps them in any way.

“A lot of people will regard that as somehow being a message of promiscuity, or saying yes to drugs when we should be saying no,” he tells NPR’s Neal Conan. But “this is not a moral judgment one way or another on drug consumption,” Feiling says.

“I’m talking about from a law enforcement and public health point of view, how do we manage drug abuse if it’s the case that there’s no chance of living in a drug free world?”