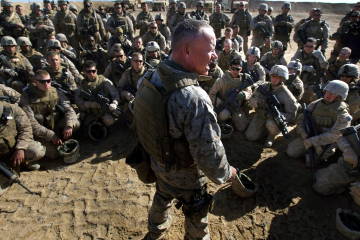 NATO and Afghan officials, meanwhile, urged militants holding Marjah, where an offensive is expected, to lay down their arms and warned civilians there to “keep your heads down.”

About 400 U.S. troops from the 5th Stryker Brigade as well as 250 Afghan soldiers and their 30 Canadian trainers moved into positions northeast of the town.

No casualties were reported. Large plumes of smoke could be seen in the area, and reporters travelling with the U.S. unit could hear the distant rattle of 50-calibre machine gun fire and detonations from MK-19s, which fire 40 millimetre grenades from Stryker vehicles.

U.S. officials have not said when the main attack on the town of some 80,000 people will take place but have nonetheless heavily publicized plans to attack, causing hundreds of people to flee the opium-producing centre in advance of the fighting.

On Tuesday, however, Taliban militants prevented townspeople from leaving Marjah, as families huddled inside their homes, witnesses said.

The offensive will be the first major one since President Barack Obama announced he was sending 30,000 reinforcements to Afghanistan.

Villager Mohammad Hakim gambled that he could wait until the last minute because he was worried about abandoning his cotton fields.

He finally tried to move his wife, nine sons, four daughters and grandchildren out of Marjah earlier Tuesday but said militants told him to return home because they had mined the surrounding roads.

“All of the people are very scared,” he said in a telephone interview. “Our village is like a ghost town. The people are staying in their homes.”

NATO and Afghan officials have insisted their primary goal is to gain public confidence and promised to follow the military action with projects aimed at restoring government control and services in the area.

“The success of the operation will not be in the military phase,” NATO’s civilian chief in Afghanistan, former British Ambassador Mark Sedwill, said Tuesday.

“It will be over the next weeks and months as the people … feel the benefits of better governance, of economic opportunities and of operating under the legitimate authorities of Afghanistan,” he told reporters in a briefing at NATO headquarters in Kabul.

International officials believe the insurgency has been able to capitalize on widespread public anger over President Hamid Karzai’s corruption-ridden government and failure to provide services after more than eight years of war.

Two NATO service members were killed Tuesday in separate attacks, including an American who died in a bombing in the south.

A French soldier also was killed during a gunfight after insurgents attacked an Afghan army convoy being escorted by French troops in the eastern Kapisa province, according to French President Nicolas Sarkozy’s office.

The governor of Helmand province said it was unusual but necessary to broadcast the plans for the offensive “to make the people aware that we are coming, that the purpose of this is to work for them, not just to conduct a military operation.”

Authorities have not advised Marjah residents to leave but have warned them to stay inside and avoid road travel once the operation begins.

Gov. Gulab Mangal said a commission was ready to handle the flow of refugees and any other fallout from the military action.

Gov. Mangal said at least 164 families had left Marjah. Afghan families have an average of six members, according to private relief groups.

“The commission is fully prepared. We have got tents. We’ve got food. We’ve got everything in place,” he said at the joint press conference with Mr. Sedwill, declining to give specific numbers.

Mr. edwill said the main question was whether Taliban militants in the area could be persuaded to join a government-promoted reintegration process.

Gov. Mangal also said the government had received preliminary indications that some local Taliban were ready to renounce al-Qaeda and join the government’s reintegration process.

“I’m confident that there are a number of Taliban members who will reconcile with us and who will be under the sovereignty of the Afghan government,” he said.

Interior Minister Hanif Atmar also unveiled a pilot model policing program in Kandahar that will get help from American and Canadian police trainers.

With Kandahar a key stronghold for the Taliban, he said enemy infiltration and overall corruption are among his top concerns.

“We’re looking at different measures to counter these two problems,” he said.

The program will focus on training, strengthening and equipping Afghan police to work within their local communities. If successful, he said the ministry has plans to expand the program to other big cities and provinces in Afghanistan over the next five years.