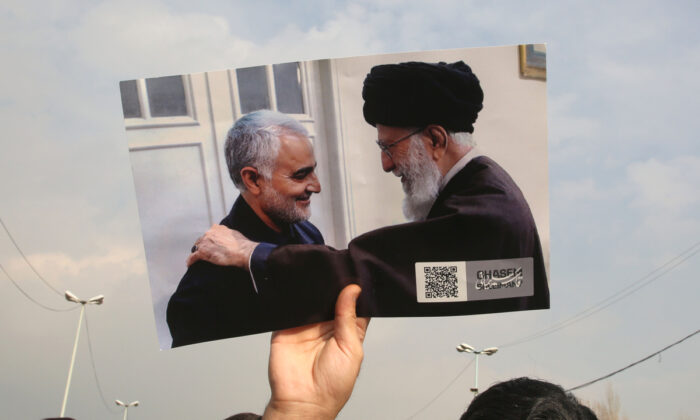 The Impact of Soleimani Death

The U.S. strike on Iranian Maj. Gen. Qassem Soleimani was one of the most significant events in the Middle East in nearly 70 years.

The U.S. “Reaper” drone strike at the Baghdad Airport on Jan. 3 that killed Soleimani was precise, rapid, and without civilian casualties. Even though it has turned the region upside down in the short term, its strategic impact will undermine the Iranian regime in the long term.

Soleimani wasn’t the second-most powerful man in Iran; he was the most powerful individual in all of the Middle East. He directed the Iranian Revolutionary Guard Corps’ (IRGC) Quds Force, the Iranian special operations and intelligence force. The IRGC protects the Iranian theocracy; the Quds Force spreads its influence. Soleimani was the man who kept the religious rulers in power.

The Quds Force trained, funded, and directed Hezbollah, Houthi rebels in Yemen, numerous militias in Iraq, Syria, Sudan, and Libya, as well as Lebanese and Palestinian paramilitary formations. They have placed special forces, equipment, and human intelligence operatives throughout the world.

Soleimani’s personality tied together this collage of terrorists. His mission was to expand Iranian influence and protect the Islamic Revolution through violence, using guns, threats, money, loyalty, and fear to achieve his goals. He was the architect for suppressing the recent civil uprisings in Iran, killing an estimated 1,500 protesters.

Soleimani wasn’t only the glue that kept the Iranian regime in power, he was also deeply involved in influencing Iraq. He directly planned, coordinated, and executed numerous attacks on U.S. forces in Iraq between 2004 and 2011. His organization developed explosively formed penetrators and conducted thousands of improvised explosive device (IED) attacks that killed more than 500 Americans, hundreds of allies, and thousands of innocent civilians and regional governments’ security forces. He also approved the attack on the U.S. Embassy in Baghdad in December 2019.

His complex network is now scrambling for leadership. The culture of the Middle East is based on loyalty to individuals—not just anyone can step in to fill Soleimani’s role; this strike was massively disruptive. His absence forces small, diverse interests to question each other, and potentially splinter. That will create fear, mistrust, and scare the Ayatollahs in Iran—their protector is gone.

Power matters in the Middle East. Soft negotiation shows weakness; hard negotiation gains respect. It’s the same for bargaining in the local markets as it is in politics.

President Donald Trump just told the Quds Force network, and the world, that the United States has the intelligence, the capability, and the will to strike the very top—at the most powerful men, anytime, anywhere—to protect U.S. interests and to achieve regional stability. I argue it was the most precise, and possibly the most influential, U.S. projection of power in the region ever.

No Western leader has had the courage to take such bold, independent, and risky action against an Iranian senior (terror) leader before. It will create some level of chaos in the short term. Retaliation is, of course, unpredictable—and dangerous. But it will certainly show that this U.S. administration won’t play the games of the past 40 years.

I believe Soleimani’s death will unify and inspire those who have feared Iranian influence. Kurds, Iraqi Sunnis, Kuwaitis, Saudi Arabians, Lebanese Christians, Jordanians, Egyptians, Israelis, and others have already formed a coalition against Iran.

His death may embolden dissatisfied Iranians who want peace and freedom. Protests are already erupting over the lies the regime has told in recent days. The protesters are surely emboldened with Soleimani out of the picture.

Strategically, the strike is likely to lessen, rather than increase, attacks on U.S. interests out of fear of response. It might even force the Iranian authoritarians to negotiate out of fear for their survival.

Regardless of the unpredictable outcomes, the strike on Soleimani was a game-changer.

Lt. Col. James McKinney is a retired U.S. Army Foreign Area officer with more than 30 years of service in strategic, tactical, and special operations assignments around the globe. He served as a senior defense official and defense attaché, the deputy chief of combating terrorism for U.S. Pacific Command, the security assistance officer for U.S. embassies in Albania and the Republic of Georgia, and a political-military adviser to the commander of U.S. Army Central in the Middle East. He’s now a consultant, and serves on the board of Saturna Capital.