NOTE TO READER……THE (DS) does not permit some fotos to print…..Do homework on another browser to see missing pics…..

We are also seeing serious malfunctions among the top officials of the fake Biden administration. Avatar Nancy Pelosi has been babbling nonsense recently. “I have been told by 3 different contacts that Pelosi is 100% an AI construct. She is not drunk, but her programming is malfunctioning,” a CIA source notes.

A P3 Freemasons source says the whole fake Biden administration is a performance designed to wake up the sleeping sheeple.

General Christopher Miller Secretary of Military and Head of the Provisional Military Government of the United States confirms US elections on November 3, 2020 were won by President Donald Trump in all 50 states. The Deep State tried to fake them and the Media reported that Joe B. he has won them over. BUT! The official ballot was electronic watermarked, which the counterfeiters were unaware of. So every vote cast for President Trump was recorded on a quantum server and the fate of each ballot is known. The Military Alliance, which stands behind President Trump, decided to show people how deeply corrupt all government institutions are, and since then, we’ve been watching a movie that really aims to open our eyes and wake us up so this never happens again. So, on January 20, 2021. at 12:00 noon the United States was taken over by a military government led by Secretary of Military General Christopher Miller and Commander-in-Chief, the lawfully elected President Donald Trump. Until the November 2020 elections, General Cr. Miller was Director of the National Counter-Terrorism Service, a student of General Michael Flynn. The role of the fake Joe B is played by three actors… Also, his entire “crew” is a cast selected by President Trump’s team. All his ministers are actors whose actions have no legal value. Including this fake military minister who visits Bulgaria and causes such a fuss – Lloyd Austin. All these actors are talking and doing as President Trump and the White Hat Military are telling them to do. This whole show is about waking people up and doing a lot of work behind the scenes. The White House and Capitol and all federal buildings in Washington have been empty and closed as of January 20, 2021. These people have never set foot there, nor have they any access to the Pentagon! They are ACTORS ! Russia and the United States have been allies in all wars so far. It’s all just propaganda from the last remnants of globalism. The new global Alliance of White Hats controls the situation of the entire planet. Soon it will all be over! In a few days time! 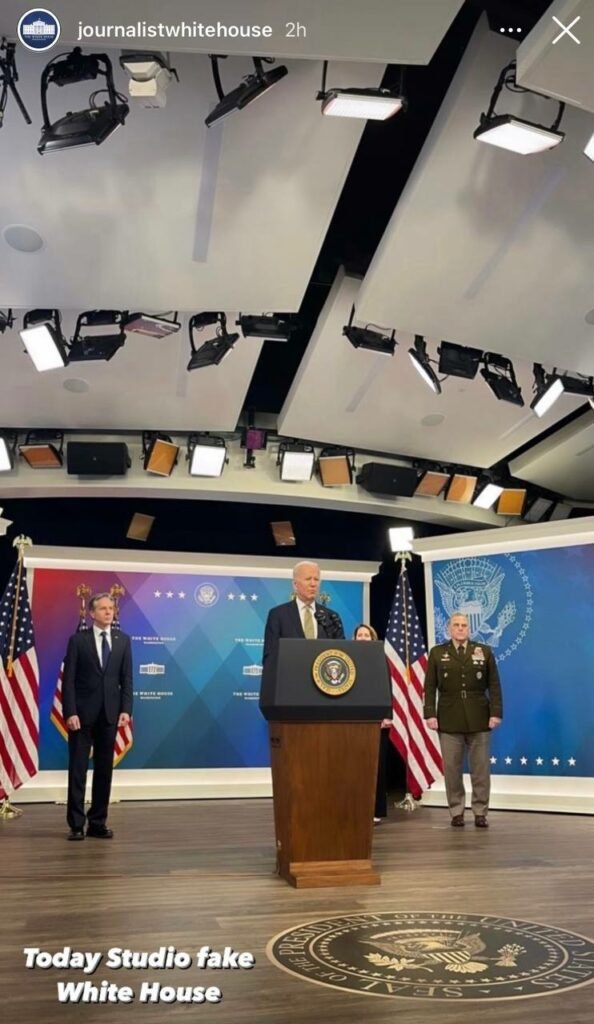 Also in a sign that we really are dealing with an earth changing situation, and not just a political one, temperatures in both poles are now an astounding 40 degrees higher in temperature than normal.

Here is what a secret space program source has to say about this:

The Antarctica and Arctic regions are heating up now because the magnetic flux on the planet is out of control. The planetary ‘dark rulers’ are doing too much ionospheric heating. Both poles are moving very fast now. The North Magnetic Pole is moving into Siberia. There will be climatic disasters because of it. One of the biggest instabilities in years coming will be climatic disasters affecting many nations, unless the Alliance takes full control of these off world space based weapons. The floods, snow, and droughts that we are seeing globally is just the beginning. We are in The Final War for the control of the planet”.

Current Ukraine Updates for Friday AM

In an historic final interview, filmmaker and music promoter Aaron Russo goes in depth on the insider-knowledge given to him by a member of the Rockefeller family.

In 2006, the year before he died, Russo released his “Freedom to Fascism” documentary that connected the dots between the Federal Reserve, income tax, computer voting fraud, national identity card and erosion of civil liberties in America.

In an interview released in 2009 by Infowars, Russo revealed the Rockefeller plan for a cashless world wherein everyone is implanted with a chip in their hand.  Russo was friends with the Rockefeller family at that time and was told this plan directly by Nick Rockefeller.  So, this was not just a “conspiracy theory”.

Russo was told – prior to 9/11 – of plans to stage terror attacks, invade foreign nations, and kick-start a high-tech police state control grid that would track the populations’ every move with implantable radio-frequency identification (“RFID”) microchips.

He explains how the global “elite” created the women’s liberation movement to break up the family and tax working women. Russo breaks down the deception of democracy – which is nothing more than mob rule guaranteed to produce tyranny.

Russo also exposes the IRS and The Federal Reserve. He blasts the unconstitutional and predatory institutions that have crippled the American Republic and crushed the people with bogus taxes, inflation and loss of privacy. Russo explains that he himself was persecuted in the late 80s by a criminal ‘retroactive’ tax scheme that attempted to levy new taxes on years already passed.

The video below is truly informative and inspirational and worth watching from the beginning.  However, we have embedded it to start at timestamp 18:06, where Russo begins talking about the Rockefellers and exposes how the oligarchs’ think, their influence and their plans for the world. Throughout the video, Alex Jones breaks down the latest activities of the New World Order and how it ties into what Russo predicted.

Russo’s full interview ends at 1 hr 30 mins.  The second half of the video is selected cuts from Russo’s interviews.  If the video is removed from YouTube you can watch it HERE and read the transcript HERE.  You can also buy the DVD from the Infowars shop HERE.

Read more: Freedom to Fascism, a documentary by Aaron Russo