GOD IS NOT NEEDED FOR CREATION 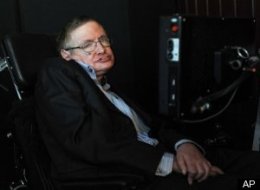 British physicist and mathematician Stephen Hawking says no, arguing in his new book that there need not be a God behind the creation of the universe.

The concept is explored in “The Grand Design,” excerpts of which were printed in the British newspaper The Times on Thursday. The book, written with fellow physicist Leonard Mlodinow, is scheduled to be published by Bantam Press on Sept. 9.

“The Grand Design,” which the publishers call Hawking’s first major work in nearly a decade, challenges Isaac Newton’s theory God must have been involved in creation because our solar system couldn’t have come out of chaos simply through nature.

But Hawking says it isn’t that simple. To understand the universe, it’s necessary to know both how and why it behaves the way it does, calling the pursuit “the Ultimate Question of Life, the Universe, and Everything.”

“We shall attempt to answer it in this book,” he wrote. “Unlike the answer given in ‘The Hitchhiker’s Guide to the Galaxy,’ ours won’t be simply ’42.'”

The number 42 is the deliberately absurd answer to the “Ultimate Question” chosen by sci-fi author Douglas Adams.

Hawking, who is renowned for his work on black holes, said the 1992 discovery of another planet orbiting a star other than the sun makes “the coincidences of our planetary conditions … far less remarkable and far less compelling as evidence that the Earth was carefully designed just to please us human beings.”

In his best-selling 1988 book “A Brief History of Time,” Hawking appeared to accept the possibility of a creator, saying the discovery of a complete theory would “be the ultimate triumph of human reason – for then we should know the mind of God.”

But “The Grand Design” seems to step away from that, saying physics can explain things without the need for a “benevolent creator who made the Universe for our benefit.”

“Because there is a law such as gravity, the Universe can and will create itself from nothing,” the excerpt says. “Spontaneous creation is the reason there is something rather than nothing, why the Universe exists, why we exist. It is not necessary to invoke God to … set the Universe going.”

Hawking retired last year as the Lucasian Chair of Mathematics at Cambridge University after 30 years in the position. The position was once held by Newton.