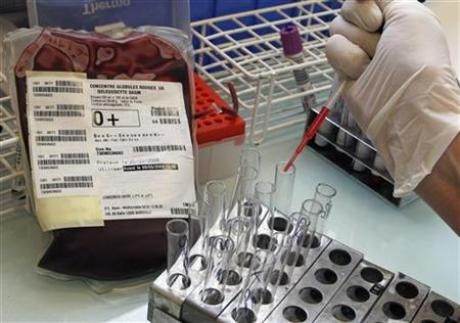 An experimental approach that looks for the DNA leaking out from dead and dying cells may provide a route to a blood test for breast cancer, U.S. researchers reported on Tuesday.

An initial study showed the test detected 70 percent of breast cancer cases, and correctly cleared 100 percent of women who did not have breast cancer, the team at Chronix Biomedical, a privately-owned company in San Jose, California, said.

The experimental test is not ready to develop into a product but provides a basis for further research, they wrote in the journal Molecular Cancer Research.

“It is based on finding the unique DNA fingerprints from dead and dying cells,” Chronix CEO Howard Urnovitz said in a telephone interview.

Technological advances in DNA sequencing made the test possible, Urnovitz said. His team sequenced the entire genomes of 26 breast cancer patients and of 67 apparently healthy women.

They were looking for extra DNA in the blood of the breast cancer patients that would come from cells dying because of the tumors.

“If a breast cell is injured, it will overexpress the genes that make it a breast cell,” Urnovitz said. In theory, if a patient has excess DNA from breast cells that are dying, there is something going on that is killing breast cells.

The search is not easy. “The entire genome can be found in the blood,” Urnovitz said. And billions of cells die every day in the human body.

But eventually the Chronix team found what they believe is tell-tale DNA from dying breast cells.

“This study supports the potential of an entirely new approach to identifying cancer at its earliest stages when therapies may be most effective,” Dr. William Mitchell of Vanderbilt University School of Medicine in Tennessee, who worked on the study, said in a statement.

The cost of genetic sequencing will have to come down more before the test would be practical, Urnovitz added.

His team used Roche AG’s 454 sequencer at a cost of thousands of dollars per person, but companies are working to speed up sequencing and get the costs down.

The tests might be used to screen women for breast cancer and to tailor treatments, Urnovitz said.

“Imagine we can come in and say ‘you have damage to the protein kinase gene that would preclude you from these 10 cancer drugs, but here are 20 others that should work’,” he said.

“You would be selecting drug treatment based on each person’s lesions. This would be a really good example of personalized medicine.”

Urnovitz also hopes such a test could monitor patients who have completed treatment for cancer. Instead of coming to a cancer center to undergo a PET scan to check for tumors that may have returned, patients could get a blood test at their convenience and have it sent in for analysis.

“You could have one blood test for everything that is going on,” he said.