Bolton’s Security Clearance in Jeopardy in Wake of Book Leaks 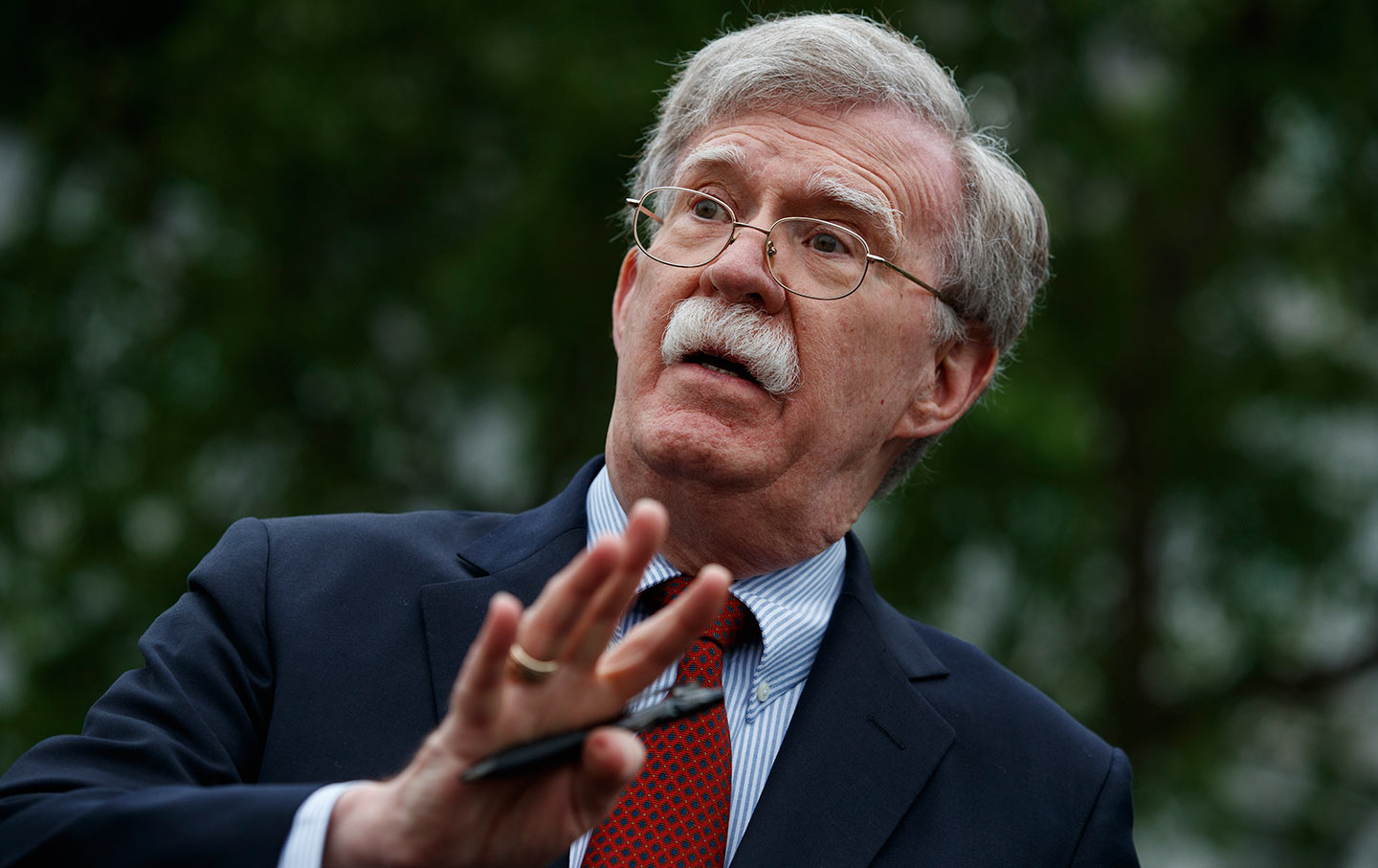 In the late summer of 2018,  just a few months into John Bolton’s national security adviser tenure, he strongly defended President Trump’s decision to revoke the security clearance of former CIA Director John Brennan, the pugnacious anti-Trump critic the president has called a “leaker,” “a liar” and ringleader of the debunked Russian collusion investigation.

At the time, Bolton accused Brennan of “politicizing intelligence,” both during the Obama administration and afterward, which he deemed a “very dangerous thing to do.”

“If there is any kind of misconduct, I think there are lots of grounds to have your security clearance revoked for behavior that calls into question your ability to hold the material in confidence,” Bolton told ABC News’ Martha Raddatz. “…For me, the issue is whether he abused information that he attained while he was director of the CIA or he may have attained erroneously or incorrectly after he left.”

Nearly a year and a half later, the shoe is on the other foot.

Bolton left the White House in September 2019 in a public eruption of vitriol on both sides over the terms of his departure. He said he resigned; Trump says he fired the longtime national security hawk over foreign policy differences. More recently, Trump accused Bolton of trying to entangle the U.S. in multiple additional wars instead of ending them as the president had promised voters in 2016 he would do.

Bolton now faces the wrath of not just Trump but his legions of loyalists for volunteering to testify against the president in the impeachment trial, thus bolstering Democrats’ arguments that the president threatened Ukraine’s president with a quid pro quo over U.S. aid to extract a commitment to investigate Joe Biden and his son’s dealings in that country.

Seeing his security clearance revoked is an almost certainty for Bolton once the impeachment trial is over, according to two government officials who spoke on condition of anonymity, as well as legal experts – all of whom say Bolton could face additional fallout for his role in the impeachment drama this week.

Several media outlets have reported that the irascible veteran national security official circulated a draft manuscript of the book containing the quid pro quo arguments to close associates before delivering it to the White House Records Management Directorate for pre-publication review, as required, and could face criminal prosecution if proof he did so surfaces.

“If your manuscript includes classified information, then you’re committing a felony by passing it around,” a former White House official told RealClearPolitics.

Bolton has denied leaking the book excerpts, insisting in a statement that “there was absolutely no coordination with the New York Times or anyone else regarding the appearance of information about this book.”

Anyone with ties to Bolton who remains on the National Security Council, along with other aides who testified in the House impeachment trial, such as Lt. Col. Alexander Vindman (and his twin brother, who also serves on the NSC), are bracing for removal.

President Trump’s national security adviser, Robert O’Brien, has made no secret of his plans to drastically downsize the executive council to its lowest staffing in nearly 20 years, arguing in a Washington Post op-ed that the council had “ballooned” under President Obama (George W. Bush had half as many staff members). Some 60 to 70 aides who are set for removal would go back to their home agencies, O’Brien told NPR, bringing the staffing total to just over 100.

The burgeoning size of the NSC has had plenty of critics in Washington over the last decade. The downsizing effort is also aimed at plugging leaks such as the one that led to the impeachment charges against Trump, a former White House official told RCP.

News of the book’s contents rocked the impeachment trial this week with leaks that it contained an alleged August conversation in which Trump told Bolton he wanted to withhold hundreds of millions of dollars in security aid from Ukraine until the country’s leaders agreed to investigate Joe and Hunter Biden’s dealings there.

Trump and his loyalists denounced the leaks as a craven attempt at revenge by an ousted administration official while simultaneously trying to boost book sales.

Bolton, Trump tweeted earlier this week, was “fired because frankly, if I listened to him, we’d be in World War Six by now.”

Trump claimed the former top aide “begged” me for a non-Senate approved job and then “IMMEDIATELY [wrote] a nasty & untrue book.”

“All Classified National Security. Who would do this?” Trump concluded.

Until Sunday, the book’s publisher, Simon & Schuster, refused to confirm its existence, even among reports that Bolton received a $2 million advance for writing it. Leaks to the New York Times about the alleged Ukraine revelations came the same day a pre-order notice for it was posted on Amazon.

“I think the timing of all of this is very, very suspect,” White House press secretary Stephanie Grisham told Fox News, pointing out that leaks from the book came one day after the Trump’s team delivered legal arguments before the Senate on Saturday. “And then suddenly, this manuscript has magically appeared in the hands of The New York Times, making very, very big claims.”

Bolton’s allegations and sudden willingness to testify threw a grenade into the impeachment trial and stirred renewed calls for witnesses to testify before senators make up their minds on whether to convict or acquit. Those explosive headlines fizzled when retiring GOP Sen. Lamar Alexander late Thursday announced he would vote against calling witnesses.

House Democrats may respond to the blocking of witnesses by subpoenaing Bolton, which they didn’t do during their impeachment inquiry, citing unnecessary delays it could cause when the White House signaled it would exert executive privilege to prevent him from testifying.

While Bolton was in the media spotlight all week, he may pay a heavy price for the attention. The March 17 publication date of “The Room Where It Happened” is now in doubt. The White House has requested that Bolton remove material it considers classified – rejecting an argument that Bolton’s attorney, Charles Cooper, made on Sunday that it is his and the author’s “firm belief that the manuscript contained no information that could reasonably be considered classified.”

Even worse, if Justice Department prosecutors can prove that Bolton circulated the manuscript before the pre-publication review was finalized — albeit a big if — they could decide to both revoke his clearance and sue to confiscate any proceeds from the book, which is already the No. 1 Amazon bestseller for its pre-orders.

Matt Bissonnette, a former member of Obama CIA Director Leon Panetta who wrote an account of the raid that killed Osama bin Laden, was forced to forfeit $6.8 million in book royalties and speaking fees for failing to clear his disclosures with the Pentagon before publishing.

In Bissonnette’s case, he simply skipped the pre-publication review process altogether, while Bolton submitted his book for review in December, pressing for the White House to abide by a 30-day timeline to sign off on it.

Bolton will likely push back against the arbitrary nature of the process, and he won’t be the first.

Jack Goldsmith and Oona Hathaway, professors of law at Harvard and Yale, respectively, both of whom have been top lawyers for the Defense Department, have argued that the process is “racked with pathologies” and has become “unreasonable.”

In a 2015 Washington Post op-ed, the pair argued that the way the system operates amounts to violations of constitutionally guaranteed free speech. The article notes that former CIA Director Stansfield Turner long ago complained about the “extreme arbitrariness” of the review process, and more recently former Obama CIA Director Leon Panetta became so frustrated with the “overzealous” process that he sent his memoir to the publisher before receiving clearance, a violation of CIA pre-publication rules.

The justification for punitive action in Bolton’s case, including revoking his security clearance, would depend on whether Bolton’s book contains classified material and whether he moves forward with publication without receiving clearance, Hathaway said.

“If it doesn’t, then revoking his security clearance would certainly be unjust,” she told RCP.

Still, Hathaway argued, Bolton would have a difficult time pursuing any legal recourse for a clearance revocation.

“The Supreme Court has indicated that the president has significant control over granting and revocation of security clearances, though there may be limits to that control that the courts have not yet clarified,” she said.

Sean Bigley, an attorney who specializes in security-clearance cases, agrees.

“The president has near absolute authority to revoke clearances,” he said in an interview.

Bigley has argued that Trump was right in revoking Brennan’s clearance because allowing former officials to hold them doesn’t improve national security but instead does more to help former officials financially benefit from their time in office.

“Indefinite security-clearance retention creates a caste-like system: The political elite are buoyed by the legitimacy and knowledge conferred upon them by continued access to the nation’s most closely guarded secrets. How does this serve the public?” Bigley argued in a 2018 Wall Street Journal op-ed. “More important, at what point does such an arrangement cease to look like a fiduciary relationship and begin to look more like a shadow government?”

If it’s proven that Bolton sent his manuscript to associates who don’t hold appropriate clearances, that could create legal problems for Bolton, Bigley argued, although he cautioned that he doesn’t know all the facts and is not alleging Bolton did anything wrong.

“If he did circulate the manuscript to some of his buddies, it raises a lot of questions because that’s not supposed to happen,” he said. “It defeats the purpose of the pre-publication review process.”