How the CIA, Mossad and “the Epstein Network” are exploiting mass shootings to create an Orwellian nightmare 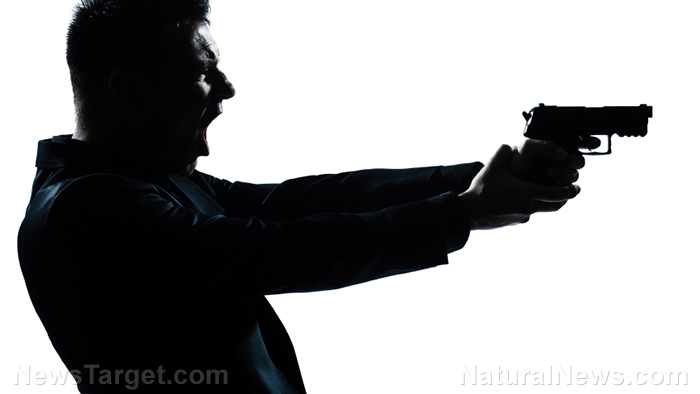 Following the arrest and subsequent death in prison of alleged child sex trafficker Jeffrey Epstein, a little-known Israeli tech company began to receive increased publicity, but for all the wrong reasons. Not long after Epstein’s arrest, and his relationships and finances came under scrutiny, it was revealed that the Israeli company Carbyne911 had received substantial funding from Jeffrey Epstein as well as Epstein’s close associate and former Prime Minister of Israel Ehud Barak, and Silicon Valley venture capitalist and prominent Trump backer Peter Thiel.

Carbyne911, or simply Carbyne, develops call-handling and identification capabilities for emergency response services in countries around the world, including the United States, where it has already been implemented in several U.S. counties and has partnered with major U.S. tech companies like Google. It specifically markets its product as a way of mitigating mass shootings in the United States without having to change existing U.S. gun laws.

In each case, these companies’ products are built in such a way that they can easily be used to illegally surveil the governments, institutions and civilians that use them, a troubling fact given Unit 8200’s documented prowess in surveillance as a means of obtaining blackmail and Israel’s history of using tech companies to aggressively spy on the U.S. government. This is further compounded by the fact that Unit 8200-linked tech companies have previously received U.S. government contracts to place “backdoors” into the U.S.’ entire telecommunications system as well as into the popular products of major American tech companies including Google, Microsoft and Facebook, many of whose key managers and executives are now former Unit 8200 officers.

As Jeffrey Epstein’s links to intelligence in both the United States and Israel — the subject of a recent four-part series exclusive to MintPress — began to be revealed in full, his financing of Carbyne came under scrutiny, particularly for the company’s deep ties to Israeli intelligence as well as to certain Americans with known connections to U.S. intelligence. Ehud Barak’s own role as both financier and chairman of Carbyne has also added to that concern, given his long history of involvement in covert intelligence operations for Israel and his long-standing ties to Israeli military intelligence.

Another funder of Carbyne, Peter Thiel, has his own company that, like Carbyne, is set to profit from the Trump administration’s proposed hi-tech solutions to mass shootings. Indeed, after the recent shooting in El Paso, Texas, President Trump — who received political donations from and has been advised by Thiel following his election — asked tech companies to “detect mass shooters before they strike,” a service already perfected by Thiel’s company Palantir, which has developed “pre-crime software” already in use throughout the country. Palantir is also a contractor for the U.S. intelligence community and also has a branch based in Israel.

Perhaps most disturbing of all, whatever technological solution is adopted by the Trump administration, it is set to use a controversial database first developed as part of a secretive U.S. government program that involved notorious Iran-Contra figures like Oliver North as a means of tracking and flagging potential American dissidents for increased surveillance and detention in the event of a vaguely defined “national emergency.”

As this report will reveal, this database — often referred to as “Main Core” — was created with the involvement of Israeli intelligence and Israel remained involved years after it was developed, and potentially to the present. It was also used by at least one former CIA official on President Reagan’s National Security Council to blackmail members of Congress, Congressional staffers and journalists, among others.

Given recent reports on the Trump administration’s plan to create a new government agency to use “advanced technology” to identify “neurobehavioral signs” of “someone headed toward a violent explosive act” using data collected by consumer electronic devices, the picture painted by the technology currently being promoted and implemented under the guise of “keeping Americans safe” is deeply Orwellian. In fact, it points directly to the genesis of a far-reaching surveillance state far more extensive than anything yet seen in American history and it is being jointly developed by individuals connected to both American and Israeli intelligence.

Carbyne911, which will be referred to simply as Carbyne in this report, is an Israeli tech-startup that promises to revolutionize how calls are handled by emergency service providers, as well as by governments, corporations and educational institutions. Not long after it was founded in 2014 by veterans of Israeli military intelligence, Carbyne began to be specifically marketed as a solution to mass shootings in the United States that goes “beyond the gun debate” and improves the “intelligence that armed emergency responders receive before entering an armed shooter situation” by providing video-streaming and acoustic input from civilian smartphones and other devices connected to the Carbyne network.

Prior to Jeffrey Epstein’s arrest in July, Carbyne had been receiving high praise from U.S. and Israeli media, with Fox News hailing the company’s services as the answer to the U.S.’ “aging 911 systems” and the Jerusalem Post writing that the company’s platform offers “hi-tech protection to social workers and school principals.” Other reports claimed that Carbyne’s services result in “a 65% reduction in time-to-dispatch.”

Carbyne’s call-handling/crisis management platform has already been implemented in several U.S. counties and the company has offices not only in the U.S. but also in Mexico, Ukraine and Israel. Carbyne’s expansion to more emergency service provider networks in the U.S. is likely, given that federal legislation seeks to offer grants to upgrade 911 call centers throughout the country with the very technology of which Carbyne is the leading provider. One of the main lobby groups promoting this legislation, the National Emergency Number Association (NENA), has a “strong relationship” with Carbyne, according to Carbyne’s website. In addition, Carbyne has also begun marketing its platform for non-emergency calls to governments, educational institutions and corporations.

Yet, what seemed like the inevitability of Carbyne’s widespread adoption in the U.S. hit a snag following the recent arrest and subsequent death of sex trafficker and pedophile Jeffrey Epstein, who exploited underage girls for the purpose of obtaining “blackmail” on the rich and poweful, an operation that had clear ties to intelligence. Epstein, after his first arrest and light sentence for soliciting sex from a minor in 2007, was tapped by former Israeli Prime Minister and former head of Israeli military intelligence Ehud Barak, to become a key financial backer of Carbyne. As a result of increased scrutiny of Epstein’s business activities and his ties to Israel, particularly to Barak, Epstein’s connection to Carbyne was revealed and extensively reported on by the independent media outlet Narativ, whose exposé on Carbyne revealed not only some of the key intelligence connections of the start-up company but also how the architecture of Carbyne’s product itself raises “serious privacy concerns.”

MintPress detailed many of Carbyne’s main intelligence connections in Part III of the investigative series “Inside the Jeffrey Epstein Scandal: Too Big to Fail.” In addition to Barak — former Israeli prime minister and former head of Israeli military intelligence — serving as Carbyne’s chairman and a key financer, the company’s executive team are all former members of Israeli intelligence, including the elite military intelligence unit, Unit 8200, which is often compared to the U.S. National Security Agency (NSA).

Carbyne’s current CEO, Amir Elichai, served in Unit 8200 and tapped former Unit 8200 commander and current board member of AIPAC Pinchas Buchris to serve as the company’s director and on its board. In addition to Elichai, another Carbyne co-founder, Lital Leshem, also served in Unit 8200 and later worked for Israeli private spy company Black Cube. The only Carbyne co-founder that didn’t serve in Unit 8200 is Alex Dizengof, who previously worked for Israel’s Prime Minister’s office.

As MintPress noted in a past report detailing Israeli military intelligence’s deep ties to American tech giant Microsoft, Unit 8200 is an elite unit of the Israeli Intelligence corps that is part of the IDF’s Directorate of Military Intelligence and is involved mainly in signal intelligence (i.e., surveillance), cyberwarfare and code decryption. It is frequently described as the Israeli equivalent of the NSA and Peter Roberts, senior research fellow at Britain’s Royal United Services Institute, characterized the unit in an interview with the Financial Times as “probably the foremost technical intelligence agency in the world and stand[ing] on a par with the NSA in everything except scale.”

Notably, the NSA and Unit 8200 have collaborated on numerous projects, most infamously on the Stuxnet virus as well as the Duqu malware. In addition, the NSA is known to work with veterans of Unit 8200 in the private sector, such as when the NSA hired two Israeli companies, to create backdoors into all the major U.S. telecommunications systems and major tech companies, including Facebook, Microsoft and Google. Both of those companies, Verint and Narus, have top executives with ties to Israeli intelligence and one of those companies, Verint (formerly Comverse Infosys), has a history of aggressively spying on U.S. government facilities. Unit 8200 is also known for spying on civilians in the occupied Palestinian territories for “coercion purposes” — i.e., gathering info for blackmail — and also for spying on Palestinian-Americans via an intelligence-sharing agreement with the NSA.

Unlike many other Unit 8200-linked start-ups, Carbyne also boasts several tie-ins to the Trump administration, including Palantir founder and Trump ally Peter Thiel — another investor in Carbyne. In addition, Carbyne’s board of advisers includes former Palantir employee Trae Stephens, who was a member of the Trump transition team, as well as former Secretary of Homeland Security Michael Chertoff. Trump donor and New York real-estate developer Eliot Tawill is also on Carbyne’s board, alongside Ehud Barak and Pinchas Buchris.

Yet, privacy concerns with Carbyne go beyond the company’s ties to Israeli intelligence and U.S. intelligence contractors like Peter Thiel. For instance, Carbyne’s smartphone app extracts the following information from the phones on which it is installed:

Device location, video live-streamed from the smartphone to the call center, text messages in a two-way chat window, any data from a user’s phone if they have the Carbyne app and ESInet, and any information that comes over a data link, which Carbyne opens in case the caller’s voice link drops out.” (emphasis added)

According to Carbyne’s website, this same information can also be obtained from any smartphone, even if it does not have Carbyne’s app installed, if that phone calls a 911 call center that uses Carbyne or merely any other number connected to Carbyne’s network.