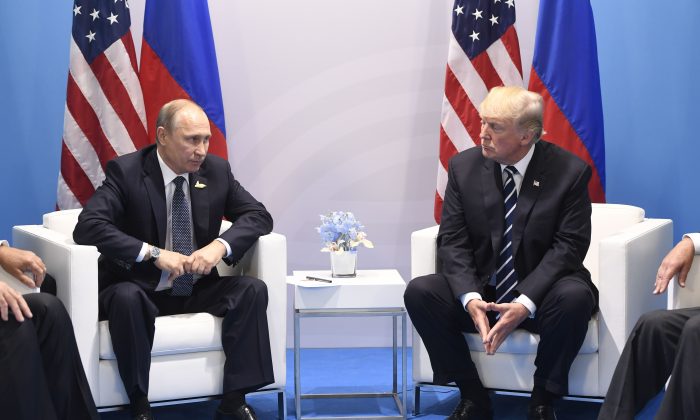 President Donald Trump and Russia’s President Vladimir Putin hold a meeting on the sidelines of the G20 Summit in Hamburg, Germany, on July 7, 2017.

US Formally Withdraws From Missile Treaty With Russia

The United States on Aug. 2 formally withdrew from the Intermediate-Range Nuclear Forces (INF) Treaty with Russia.

American officials had warned they would withdraw if Russia didn’t correct alleged infractions of the treaty. Both countries suspended their obligations under the pact on Feb. 2 after discussions on the issue proved fruitless.

President Donald Trump said in October 2018 that Russia wasn’t complying with the treaty, including failing to comply with requests to destroy its 9M729 ballistic missiles, which the United States said violated the pact.

“The United States has fully adhered to the INF Treaty for more than 30 years, but we will not remain constrained by its terms while Russia misrepresents its actions,” Trump said in a statement issued by the White House. “We cannot be the only country in the world unilaterally bound by this treaty, or any other.”

In a statement on Friday, the State Department said the withdrawal was “due to the Russian Federation’s continuing violation of the treaty.”

“Russia failed to return to full and verified compliance through the destruction of its noncompliant missile system—the SSC-8 or 9M729 ground-launched, intermediate-range cruise missile,” it added.

According to the department, Russia in the mid-2000s began developing, producing, and testing multiple battalions of the missile the United States says is noncompliant. American officials raised concerns with Russia in 2013.

“With the full support of our NATO Allies, the United States has determined Russia to be in material breach of the treaty, and has subsequently suspended our obligations under the treaty. Over the past six months, the United States provided Russia a final opportunity to correct its noncompliance. As it has for many years, Russia chose to keep its noncompliant missile rather than going back into compliance with its treaty obligations.”

“Unless Russia honors its INF Treaty obligations through the verifiable destruction of all of its 9M729 systems, thereby returning to full and verifiable compliance before the U.S. withdrawal takes effect in six months, Russia will bear sole responsibility for the end of the Treaty,” the NATO declaration states.

Russia said on Friday that it asked the United States for a moratorium on the deployment of short and intermediate-range nuclear missiles in Europe, reported Reuters.

“We have proposed to the United States and other NATO countries that they weigh the possibility of declaring the same kind of moratorium on the deployment of short and intermediate range missiles as ours,” Deputy Foreign Minister Sergei Ryabkov was quoted as saying by the TASS news agency.

President Vladimir Putin said Russia doesn’t want an arms race and vowed that he wouldn’t deploy missiles unless America did so first.

NATO Secretary-General Jens Stoltenberg said that the moratorium request was “not a credible offer” and alleged Russia keeps building missiles.

“There are no new U.S. missiles, no new NATO missiles in Europe, but there are more and more new Russian missiles,” he said.