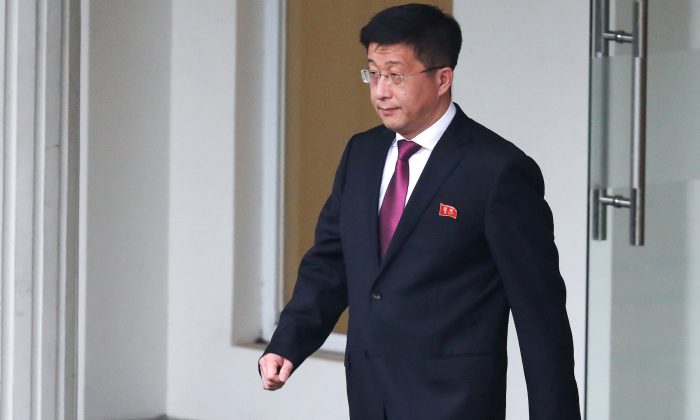 North Korea has executed Kim Hyok Chol, the special envoy to the United States who led working-level negotiations for the February U.S.-North Korea summit in Hanoi, a South Korean newspaper reported on May 31, citing an unnamed source.

The unnamed North Korea source told the paper, Chosun Ilbo, that Kim Hyok Chol was shot at Mirim Airport in March with four other senior officials. The source said they were charged with spying for the United States.

Kim Hyok Chol had been negotiations counterpart to U.S. special representative for North Korea Stephen Biegun before the summit.

The source also said that a senior official who had been U.S. Secretary of State Mike Pompeo’s counterpart in the run-up to the summit, Kim Yong Chol, is being subjected to forced labor and ideological education in Jagang Province.

Meanwhile, Shin Hye Yong, the interpreter for Kim Jong Un at the Hanoi meeting, is reportedly detained in a political prison camp. The source said that Yong was accused by the regime of “tarnishing the authority” of North Korean leader Kim Jong Un for an interpreting error.

Kim Song Hye of the United Front Department, who carried out working-level negotiations with Kim Hyok Chol, has also been sent to a political prison camp, the source told Chosun.

Chosun also reported that Kim Yo Jong, the younger sister of Kim Jong Un who aided him at the summit, was told to “lie low,” citing an unnamed government official.

“Kim Yo-jong has not been spotted in public since the Hanoi summit,” the government official said, reported Chosun.

North Korean state newspaper Rodong Sinmun said in a commentary on May 30 that: “Acting like one is revering the Leader in front (of others) but dreaming of something else when one turns around, is an anti-party, anti-revolutionary act that has thrown away the moral fidelity toward the Leader, and such people will not avoid the stern judgment of the revolution.

“There are traitors and turncoats who only memorize words of loyalty toward the Leader and even change according to the trend of the time,” the commentary said.

It marks the first time that expressions hinting at purging, such as “anti-party, anti-revolutionary” and “stern judgment,” have appeared in Rodong Sinmun since the December 2013 execution of Kim Jong Un’s uncle, Jang Song Thaek, Chosun Ilbo said.

An official at South Korea’s Unification Ministry declined to comment.

Previous reports in South Korean media about senior North Korean officials being executed have proven false, according to Bloomberg.

No Agreement at Summit

President Donald Trump and North Korean leader Kim Jong Un’s second summit had ended ahead of schedule with no agreement on ridding the Korean Peninsula of nuclear weapons.

“The two leaders discussed various ways to advance denuclearization and economic driven concepts,” White House press secretary Sarah Huckabee Sanders said in a statement on Feb. 28. “No agreement was reached at this time, but their respective teams look forward to meeting in the future.”

Trump said at a press conference later that North Korea’s insistence on lifting sanctions without offering enough denuclearization in return proved to be the sticking point.