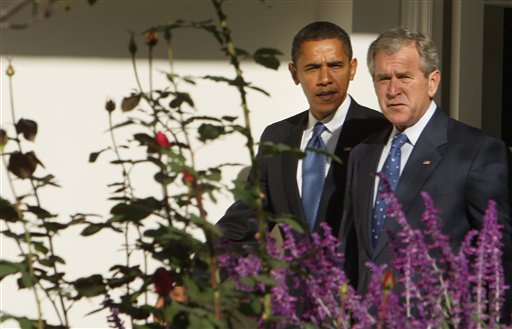 President Bush and President-elect Obama walk along the West Wing Colonnade of the White House in Washington, Monday, Nov. 10, 2008, prior to their meeting at the White House. (AP Photo/Charles Dharapak)

Deep State And The Reality Behind Super Tuesday And November Election

“The eyes are useless when the mind is blind.” – Anonymous

One thing is for certain about this year’s Super Tuesday and presidential election: At least Americans are being entertained.

But the problem with entertaining elections is people are both underexposed and overexposed – underexposed insofar as having difficulty seeing justice and the critical issues, overexposed in the spectacular self-presentation of reality shows and political theatrics.(1)

To be certain, who couldn’t resist laughing at Sen. Marc Rubio imitating billionaire Donald Trump worrying that his pants were “wet” last Thursday night at the CNN GOP Debate.

At the same time, Trump’s response was hilarious, calling Rubio a “lightweight” and “clown,” and then ridiculing his dry-mouth condition by carrying around a water bottle and splashing the crowd.

In fact, they “are” the government, ultimately controlling and deciding America’s electoral processes. In addition to elections, the average citizen has no idea how they dominate education, water, food, resources, finances, media, energy, information, medicine and other services and industries.

In other words, even democracies can produce their own forms of dictatorial apathy, a kind of inverted totalitarianism where one is either too morally blind to act or paralyzed by myths and the very tyrannical institutions which they participate in.

As for Bush, he was immediately manipulated and controlled by two long-time insiders of the Deep State: Vice President Dick Cheney and Secretary of Defense Donald Rumsfeld. Bush merely went through the motions of being president while corporate elites and the Pentagon decided in the end foreign and domestic policies.

In fact, Cheney and Haliburton epitomized the Deep State’s corporate-military malfeasance and the secret continuity of government, such as Cheney’s emergency powers and favorable no-bid contracts with Haliburton during the U.S.-Iraqi War.

Meanwhile, Rumsfeld and his elite minions doctored intelligence and the mass media, ultimately issuing directives to invade Afghanistan and Iraq. In reality, they had actually chosen Bush to be President.(2)

Barack Osama’s “Change We Can Live With” promised a new America, one that stressed education, elderly care, and improved civil and economic rights for workers, women and minorities.

In addition to making college affordable and investing in infrastructure, he pledged universal healthcare. Despite a Democratic majority, the Affordable Care Act was written by for-profit health and pharmaceutical elites.

His foreign policy also unraveled as Secretary of State Hillary Clinton, General Davis Petraeus, and Secretary of Defense determined the wars in Iraq and Afghanistan.(3)

Along with implementing an all-pervasive surveillance state, the Deep State as well initiated more wars in Syria, Libya, Egypt, Somalia, Yemen, even at times funding and working with ISIS.

In effect, America’s current democratic elections are constructs of the Deep State, the behaviors and thoughts by most Americans oblivious to the dominant interests of the corporate and military elites.

Americans are without a doubt imprisoned, but have been taught to erroneously believe they are free. The managed control and engineering of Super Tuesday and November’s presidential election will be another advertisement, a false flag that propagates pseudo free will and individual sovereignty.

“Democracy in the United States,” writes Bernard Harcourt, “is not so much a democracy of voters as one of potential voters.” Moreover, “It is not an actual democracy so much as a virtual democracy but one that is in no way actualized, operating by catastrophe only.”

After winning the 1992 presidential race, and wanting to grow the economy through an ambitious program of federal spending, Bill Clinton was told he would have to drastically scale back his plans and shift the monies to the corporate and military coffers.Who is in the wrong here? Teacher or student? #Sextingscandalhttp://bit.ly/219yTiR

He responded: “You mean to tell me that the success of the economic program and re-election hinges on the Federal Reserves and a bunch of f*cking bond traders?”(4)Clinton was a quick learner, understanding early in his first term the presidency is not always imperial and if he did not accommodate “unelected power” he would become a one-term president. He adjusted his goals to the expectations of Wall Street and the Pentagon, just like most Americans will unknowingly do again in this year’s election.