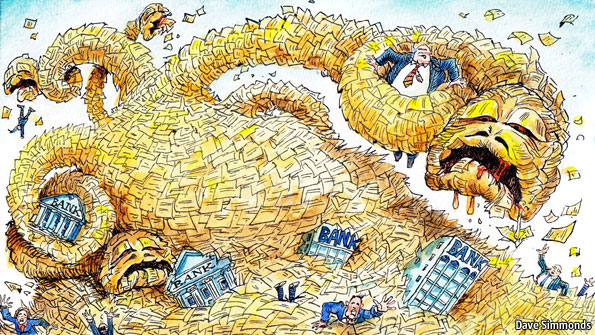 This is a commentary which should never have needed to be written. What is euphemistically called “fractional-reserve banking” is obvious fraud, and obvious crime. By its very definition, it transforms the banking sector of an economy into a leveraged Ponzi-scheme, and as with all Ponzi-schemes, there is no possible “happy ending” here.

Mathematically-based principles are often illustrated best through use of an extreme, numerical example. We have no need to construct any hypothetical extremes, however, when we already have real-life insanity, in our current monetary/regulatory framework.

Here it is important to note that in order to conceal the fraud, crime, and insanity of our present system to the greatest degree possible, the bankers hide their dirty deeds within their own convoluted jargon. Thus presenting “fractional-reserve banking” to readers requires some brief investment of time in definition of terms, starting with this term, itself.

Fractional-reserve banking evolved literally based upon the temptation of all bankers to perpetrate fraud. Empirically it has always been observed, down through the centuries, that under normal circumstances, only a tiny percentage of depositors will come to claim their cash/wealth at any one time. Thus the temptation is for bankers to “lend” more funds than they actually possess, i.e. they are “lending” what does not even exist: “fractional-reserve banking” – the ultimate euphemism of banking and fraud.

It goes without saying that anyone or any entity which endeavours to “lend” something which does not exist is perpetrating fraud. But before examining this inherent fraud more closely, it is important to back-up, and look at the Law. Note that even when banks “lend” the money which they actually do hold on deposit (as trustees for the depositors) that this is already wholly/totally illegal. It is the crime known as“conversion”.

A person who knowingly or intentionally exerts unauthorized control over property of another person commits criminal conversion.

When your bank lends-out money you deposited, which it claims to be “holding” for you as trustee, does it seek your prior authorization before lending-out your property and thus putting it at risk? Of course not. The banks get around the naked criminality of their lending operations through general authorization. In the small-print of any/all bank deposit contracts is a clause whereby the depositor “authorizes” the bank to lend-out their property to Third Parties.

We therefore start with the basic fact, that “banking” as we know it (bankers taking deposits, and then lending those deposits) is literally institutionalized crime. But “fractional-reserve banking” goes far beyond this original level of criminality.

Not only are banks allowed to lend what they don’t own, they are allowed to lend what they don’t even possess – and by many multiples. “Banking” is institutionalized crime. “Fractional-reserve banking” piles-on a systemic and enormous element of fraud: “lending” what does not even exist. But this isn’t even the most-shocking aspect of fractional-reserve fraud.

Here readers need to understand the consequence of allowing banks to lend what they do not even possess. A simple, hypothetical example will illustrate the principal-of-insanity which is the basis of our current monetary system .

Suppose JPMorgan holds $1 billion in total deposits. In the original form of our fractional-reserve fraud, the fraud ratio was set at 10:1. This meant that for every dollar which a bank actually held, it was allowed to “lend” $10. Now the simple arithmetic.

JPMorgan is holding $1 billion of other peoples’ property, but it is allowed to “lend” a total of $10 billion. Where does the other $9 billion come from? It is literally conjured out of thin air , via fractional-reserve fraud. Thus, for many readers, this represents their first, actual glimpse of the full fraud, and full insanity of our current monetary system.

This is fractional-reserve banking, presented as the naked fraud that it is: bankers “lending” not only more than what they possess, but lending out “money” which grossly exceeds the amount of capital in existence. Conjuring oceans of paper out of thin air. It is inherently criminal. It is inherently fraudulent.

It automatically transforms our monetary system into an institutionalized Ponzi-scheme. By definition, all “fractional-reserve banking systems” must automatically collapse – in a sea of fraud – if all depositors simply claim a tiny portion of their deposits, at any one time.

This is also known euphemistically as a “run on a bank”. Here, however, the euphemism is intended to insinuate that the mere act of depositors taking possession of their own property is somehow a “crime” against that financial system. Indeed, directly implying as much, our own governments will institute “bank holidays”. This is yet another banking euphemism where depositors are legally prohibited from taking possession of their own property. The most recent example of such financial oppression was in Greece .

How can governments justify such financial oppression? While it is never explicitly acknowledged, the justification is entirely singular: to prop-up a Ponzi-scheme. It thus becomes necessary for governments to abandon the Rule of Law, and legally prevent/prohibit their own citizens from taking possession of their own property – as the only means of preventing the complete implosion of that system. The epitome of a Ponzi-scheme.

Observe how totally perverted and totally criminalized is the current system of fractional-reserve fraud. The banks are legally allowed to commit the crime of conversion: “lending” what they do not own. The banksare legally allowed to commit fraud: “lending” what does not even exist. But if/when Depositors seek to take possession of their own property, they are treated like criminals.

The bankers are granted absolute legal protection to perpetrate their fraud/crime, at the direct expense of the law-abiding citizens of that society.

However, this marks only the starting-point for our present system of monetary/financial fraud . In its original form, fractional-reserve fraud was already entirely criminalized, and already entirely fraudulent. How/why would our governments have ever turned our entire financial system into such institutionalized fraud?

They were convinced to do so on the basis of the promise/guarantee of the bankers. The bankers promised that they would exercise the enormous, legal privilege which they had been granted by acting in a responsible manner, and doing nothing to jeopardize this institutionalized Ponzi-scheme.

In reality, the banks have done the precisely the opposite. First the Big Bank crime syndicate had their servants in our puppet-governments tear-up the legal distinction between “banking” (institutionalized fraud) and “investing” ( institutionalized gambling ). Overnight, our banks were transformed into bank-casinos.

Not only were these “banks” lending-out funds which grossly exceeded their current assets, they were gambling with these funds, and at even greater ratios of leveraged fraud. The result of combining extreme fraud with extreme financial recklessness was the Crash of ’08. The Big Banks literally “blew up” the Western financial system with their extreme, reckless gambling – gambling which began with the deposits which they claimed to be holding as trustees.

Instead of our governments punishing these Big Banks for their extreme, reckless fraud, they rewarded them. Using our money, these Traitor Governments indemnified the Big Banks for every cent of their reckless, fraudulent gambling. Then they did something much, much worse.

Our Traitor Governments bowed to the will of their banker Overlords, and dubbed these institutions of fraud/crime as being “too big to fail” . Translation? Instead of preventing these institutions of financial crime from continuing their reckless gambling, they promised to pay-off all of the banksters’ gambling debts, forever.

What happens when you tell any Compulsive Gambler that you will make-good on all of their gambling losses? The Gambler runs wild. Observe what the banking crime syndicate calls “the derivatives market” . It is their own private, rigged casino, where the total amount of ultra-leveraged betting is twenty times as large as the entire global economy .

What these Traitor Governments actually did was the exact opposite of everything they promised. Instead of reducing and restraining the insane, reckless gambling of the bankers which led to the Crash of ’08, they institutionalized that, as well.

This will be the subject of Part II: taking a system which was already wholly criminal, ridiculously fraudulent, and completely unstable, and making it much, much worse.