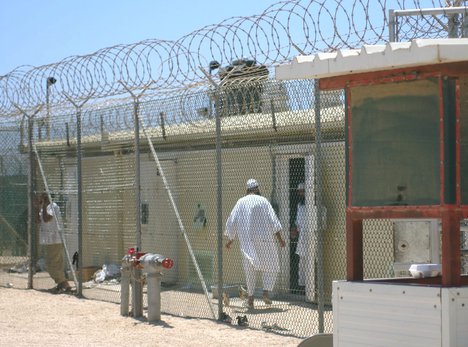 File – Detainees walk around the exercise yard in Camp 4, the medium security facility within Camp Delta at Naval Station Guantanamo Bay, Cuba. In Camp 4, highly compliant detainees live in a communal setting and have extensive access to recreation.
Article by  Dallas Darling

If a nation must fight wars in a fashion that its politicians, soldiers and citizens can live with, then perhaps this is why those who defy U.S. hegemony are considered irrational, even mad. Indeed, Americans were repeatedly warned that President Barack Obama was making a nuclear pact with the “mad” mullahs of Iran. For saying her sons were “just as innocent as all those who are being killed by the U.S.,” the mass media declared Boston Marathon bomber Dzhokhar Tsarnaev’s mother “irrational” and “insane.” Believing the attacker of the USS Cole bombing must be suffering from brain damage, a military judge ordered the Pentagon to conduct a brain scan. The man charged last week for plotting a suicide bomb attack against a military base in Kansas is also considered mentally ill, as was an elderly man who committed suicide in front of the nation’s Capitol. But no one questioned why he was holding a sign reading: “Tax the One Percent!” No one bothered to divulge the content of his letter listing a litany of abuses committed by the State.

For the U.S., those who defy its military hubris are irrational or mad. But are they? Few can doubt how hypocritical and criminal U.S. national security issues have been. Preemptive wars and deadly military occupations killed millions while causing refugee crises. The U.S. claims the power to hold, without trial and indefinitely in military confinement, American citizens accused of terrorism. The U.S. also tortures prisoners, participates in extrajudicial killings and assassinations, denies detainees access to human rights groups, and is currently engaged in covert military operations in Libya, Egypt, Syria, Iran, Yemen, Ukraine and Venezuela. Nations like Sudan, Cuba and Iran are on a terrorist list. Yet, and from bombing a pharmaceutical plant to overthrowing a freely elected government and destroying passenger planes, the U.S. was the one that committed crimes against humanity. The U.S. continues to expand its surveillance and metadata mining policies. Incidences of police brutality and killings are mere isolated events.

In his seminal work, “Madness and Civilization,” Michel Foucault argued that the Middle Ages accepted madness, irrationality, and visible deformity as a part of life. Madness was respected, even if it was also feared. But with the Enlightenment Age and Scientific Revolution, all sorts of people were deemed “undesirable” and “unfit,” as without reason and subject to detention by the state.(1) Many were institutionalized, physically chained to the walls and floors. Since modern concepts of madness and irrationality were shaped during this time, mental illness became synonymous with the absence of reason. As societies grew more industrious, bureaucratic and complex, more types of behavior were considered unreasonable and irrational. But for Foucault, the new definition of mental illness and irrationality was insidious, a kind of labeling and social control. This new societal construct was a means in which rulers could deflect and justify their own outlandish and irrational behaviors while punishing the exact same behaviors carried out by dissenters, or those who defied the absolute State.

Michael J. Glennon would agree. In “National Security And Double Government,” he writes how many of America’s foreign policies and theatric wars appeared entirely rational at the time but yet killed people for no purpose, even “squandering the nation’s political energy in a fruitless repetition of old arguments.”(2) From the Bay of Pigs to Vietnam and Bush’s invasion of Iraq, much the same could be said of other ill-conceived national security initiatives. The problem, therefore, is how rationality is indeed “bounded” by cognitive distortions, and the many ways that otherwise “rational” (if there really is such a thing) leaders and people behave irrationally.(3) Glennon concludes that along with underestimating the role of chance events, normal thinking people commit many other systematic and grave cognitive errors. There is the corruption of thought by emotion, the bandwagon bias, and remembering choices as being better than they actually were. There is also the skepticism towards differing opinions or contrary evidence, and the false assumption that others share similar attitudes, values and beliefs. “Not only can we be blind to the obvious,” writes Glennon, “but we are also blind to our blindness.”(4)

Can one add as well: We are irrational to our own irrationalities, or insane to our own insanities? Innocence, too, is bounded by cognitive distortions, as is the corruption of thoughts and emotions which guide our nuclear programs, military bases, and naval destroyers. The bandwagon bias ensures the State’s perpetuity, with its impervious ideologies and institutions. One can only imagine what would happen to U.S. foreign policies and national security if the irrational and mentally ill, the insane and so-called mad mullahs, were taken serious. Does this include suicide bombers-the epitome of the rejection of Western values and the resistance of the world of Islam to the neo-colonial strategy of the U.S. and regional hegemony of Israel?(5) One can only envision how domestic policies would change if self-immolation was truly valued. Until the U.S. recognizes and confronts its own hypocritical policies and mad and irrational wars, not only will it be impossible for the U.S. to rationally live with itself but it will be extremely difficult for others to do the same.