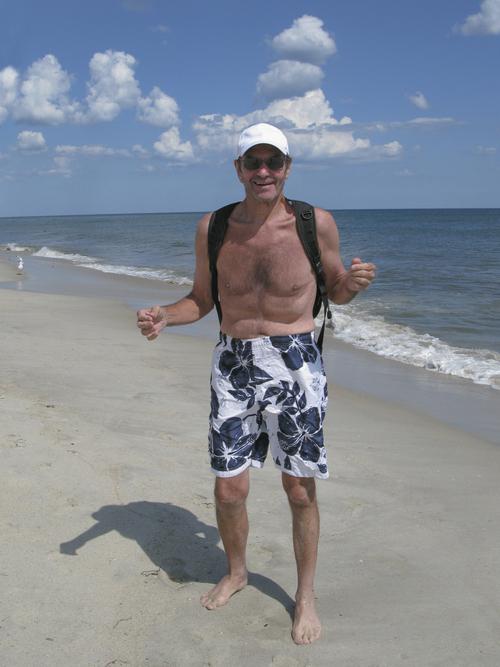 For better or for worse, we Americans have some very unique habits. Baseball caps and fanny packs aren’t the only giveaways. So Yahoo Travel found out what foreigners think are our top tells. Here are 13 ways to spot an American anywhere in the world.

1. We’re the only ones wearing white athletic socks.

Seat socks are so American. (Thinkstock)

For real. Others around the world mostly wear darker-colored socks. In fact, according to Olivier Magny (French author of Stuff Parisians Like) in Paris, people actually find white socks offensive.

Related: How to Spot an American in Any Airport

2. We have superwhite, supernice teeth

Ricky Gervais highlighting his British teeth (that’s before he became famous in the U.S. and had them whitened, of course). (Ricky Gervais/Facebook)

Un-naturally white, perfectly straight-toothed smiles have “U.S.A.” written all over them. Ricky Gervais, the English comic known for his notoriously bad imperfect teeth (before he became famous in American and whitened them) even says so: “Americans, they are obsessed with perfect teeth.” Whereas others, like the Brits, are more comfortable having teeth with “character.” Flossing also isn’t a thing in the rest of the world like it is here.

Related: Surefire Ways to Spot an American on a Cruise

3. We’re shocked by all the naked breasts.

America likes to pretend it’s puritanical (though there’s just as much naughty stuff going on behind closed doors). Europeans, Australians, Brazilians, etc., just put it out there more, what with naked girls in the newspapers and on TV commercials, and with all those topless beaches. We Americans are the ones staring at all the toplessness, looking slightly uncomfortable, yet fascinated.

4. We don’t care about the soccer match.

David Beckham is the exception. But we prefer this look. (Thinkstock)

If there’s a good soccer game (or “football” as much of the world refers to it) on TV, in just about any country in the world, you’ll see a crowd of rowdy and very emotionally involved fans watching and cheering. Americans barely know when the World Cup is happening, and most of us probably couldn’t name too many soccer players beyond David Beckham (Does he even play anymore?) and Cristiano Ronaldo – and let’s be honest, that’s mostly because they’re adorable.

5. We say ethnocentric things like: “What’s that in normal degrees [a.k.a., Fahrenheit]?”

News bulletin: Only five countries in the world use Fahrenheit (U.S., Bahamas, Belize, Cayman Islands, and Palau). So technically, “normal” temperatures are actually Celsius temperatures. That being the case, we should probably have an idea of it when traveling abroad. (Hint: Zero degrees Celsius is freezing – literally – and 32 degrees Celsius is pretty darn hot.)

6. We clap at everything.

For example, you know how sometimes people clap when the pilot lands the plane safely after a bumpy flight? International folk say they just don’t get it.

“Why do you use so much hand sanitizer?” asks German Sophie-Claire Hoeller. We’re not good with germs or dirt (hence the more intense showering and deodorizing habits than say, Europeans, for example). Come to think of it, this American writer is often the only one with a supply of antibacterial wipes on group trips with international travelers. Of course, everyone’s always asking to use one when things get icky…

8. We ask for tap water.
In many places around the world it’s common to drink bottled mineral water with meals, for various reasons. But Americans want tap. (Thinkstock)

Why is that so weird to non-Americans? “It’s simply not part of the culture,” says one Amsterdam resident. That’s true throughout Europe (where they often drink sparkling or mineral water with meals) and in other countries around the world where tap water may not taste good or be safe to drink.

9. We’re the ones sporting all The North Face jackets.

The puffers are easy to smush up into a little ball for traveling. (The North Face/Facebook)

This (strangely?) seems to be a pretty popular answer to the questions: “What’s a giveaway that someone’s an American?” But hey, even President Barack Obama has a North Face. (We do love our American brands.) The North Face accounted for more than a third of the outdoor apparel market by 2012, according to the New York Times. And the brand is just not as popular in Europe and other countries abroad with colder climates. There are a some exceptions: Koreans have a recent obsession with the jackets – with teens actually ranking each other on the type of North Face they own.

Isn’t a hotdog built for eating on the go? (Thinkstock)

In other lands, for example in many European countries, and in Asian countries like Japan, where dining is more sacred and savored, it’s considered uncivilized – or at least weird – to eat and walk.

Ask a bunch of foreigners how to spot an American abroad, and this is the one that comes up the most often. In fact, our outgoing personalities are often startling to more reserved types like Germans and Brits. Says one Swede, for example: “We don’t talk to people here.”

Sue us for being generous. Even if we know it’s not customary to tip in other countries around the world, somehow as Americans, it still feels wrong not to. But be careful – in some places, like Japan, it’s actually an insult to leave a gratuity.

Related: Are Americans Really the Worst? 5 Other Countries that Make Us Look Good

13. We speak English. Only. And we expect everyone else to, as well.