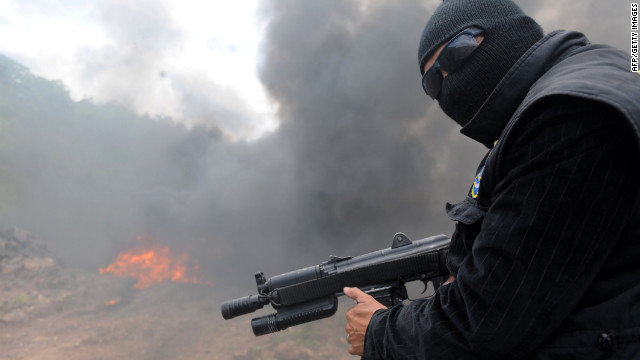 The drug trade is, in a word, enormous – of total global crime proceeds, the United Nations has estimated that some $350 billion comes from the sale of illicit drugs. But the economic costs are only one measure of the ineffectiveness of drug policies. When the human costs of violence, human rights abuses, infectious diseases and mass incarceration are considered, the damage to countries and communities is massive.

How bad is it? The London School of Economics this week publishes a report that attempts to quantify some of these consequences of the war on drugs.

The report has been endorsed by five Nobel Prize-winning economists who write, “It is time to end the ‘war on drugs’ and massively redirect resources towards effective evidence-based policies underpinned by rigorous economic analysis. The pursuit of a militarized and enforcement-led global ‘war on drugs’ strategy has produced enormous negative outcomes and collateral damage.”

Indeed, around the world, prisons are full of minor drug offenders, robbing households of primary wage earners and caretakers as well as devastating vulnerable communities, and the report specifically tracks how the introduction of harsh drug laws has contributed to the surging American prison population.
Consider that in 1980, only six percent of people in state prisons in the United States were incarcerated for drugs. By 2009 that figure stood at 18 percent. The numbers on federal prisons are even more damning. In 1980, 25 percent of prisoners were incarcerated for drugs. In 2010 it was 51 percent of the federal prison population.
Keeping prisons full of non-violent (and often low level) drug offenders is a drain on public coffers, sucking away resources that should be spent on treatment and prevention rather than a criminal justice system that offers very little to those in its care.

Moreover, the stigma of criminalization comes with a bevy of additional costs, driving people away from services, inhibits participation in legal economies and exposes them to greater risks.
Needle and syringe exchange programs are some of the most cost-effective preventive technologies available. After all, the treatment of blood-borne viruses such as HIV can be extremely expensive, while prevention is relatively cheap. A large Australian study, for example, found that for every dollar invested in these services, four are returned in healthcare cost-savings over the next 10 years. When patient/client costs and productivity gains and losses are considered, that figure increased to a return of $27 for every dollar spent.

While similar benefits are associated with opioid maintenance therapies, in the five counties with the highest burden of HIV among injecting drug users only about two percent have access to methadone. Supervised consumption facilities, where people are provided with spaces to use drugs under the supervision of the medical professional with onsite social services are an exception, rather than a rule.

Unfortunately, while recognized as public health best practices, these services are woefully underfunded and often come with very little political support. And there is perhaps no greater poster case for the failure of international drug control strategies than the violence that has plagued so-called “producer” and “transit” states in Latin America. Enforcement efforts, while having some successes, have generally just pushed the illicit drug trade, and related violence, across borders.

We’ve seen the drug trade move from Colombia to Mexico through various parts of Central America with no evidence that the overall supply of drugs have been affected at all.

The vast imbalance with how drug laws are enforced tests the credibility of the entire regime. The world’s banks are flooded with drug money and they get off by paying hefty penalties (last year, for example, HSBC Holdings agreed to pay nearly $2 billion) while the rural poor languish in prisons or are thrown off land that feeds their families for growing small amounts of coca or opium.

As countries experiencing surges in drug activity see murder rates rise, corruption increase and social fabric of societies ripped to shreds, how much longer is it acceptable to ask them to be part of a failed strategy?
In addition, a greater question now is what can be done?
The LSE report urges the United Nations to drop its “repressive, ‘one-size-fits-all’ approach” and to “take the lead in advocating a new cooperative international framework based on the fundamental acceptance that different policies will work for different countries and regions.”

There’s a reason why these calls are being directed at the United Nations. In 2016, at the request of several Latin American presidents, the U.N. General Assembly will hold a special session to review the functioning of the drug control system. The London School of Economics report is being delivered to a representative of the Guatemalan government – Guatemalan President Otto Pérez Molina inspired the 2016 session and has said he will use it in negotiations with other governments.

The international discussions around drugs are sure to be tense. There is a powerful coalition that stands in defense of harsh drug laws, including Russia, Japan, Pakistan, China and Egypt. There are others in Europe that fully support a greater emphasis on health-based approaches, but are reluctant to tinker with international norms.
Against this backdrop, the role of the United States is still undetermined, not least because it has traditionally been a barrier to progressive reforms internationally. Yet even in the U.S., new marijuana policies in Washington and Colorado, as well as recent federal efforts to address mass incarceration, signal there may be some evolution in American attitudes.