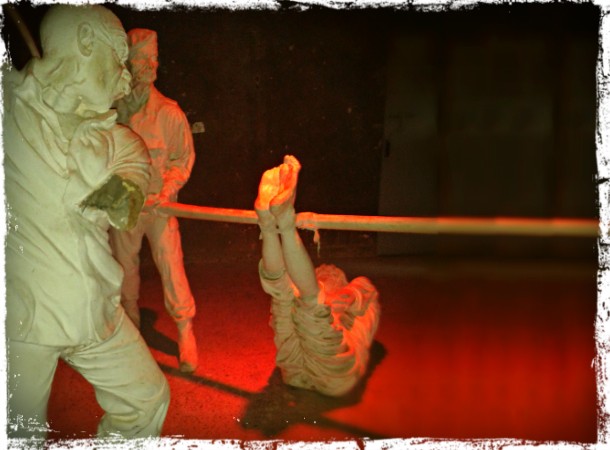 One tortured by the regime, another by Islamist rebels, both offer evidence of the worst kind of brutality that reigns in Syria today.

Mohammed Jabri spent 67 days in the infamous prison run by Syria’s political secret service in the Mezzeh section of Damascus. “The victims in the photographs went to heaven as martyrs,” the 25-year-old says. “But there are thousands more in such living hells.”

Jabri was able to survive the inhuman conditions and weeks of torture only by sheer luck. The photographs he refers to are the horrifying pictures that have caused world outrage since coming to light last month. They show blood-spattered corpses bearing deep red welts on the upper torso and strangulation marks on the neck. Altogether there are 55,000 pictures of 11,000 victims that the Syrian regime allegedly has on its conscience.

An army deserter says he smuggled the evidence out of Syria; and the authenticity of the photographs has been investigated by a committee whose chairman is Sir Desmond de Silva, former chief prosecutor of Sierra Leone’s special court. “We are persuaded that these documents are authentic and will hold up in court,” he has said.

Jabri dismisses the doubts of those who note that Qatar, a country strongly opposed to the Syrian regime, has helped finance the operation. “You can say what you want. The photos are real and were taken at the Mezzeh prison where I was.”

How he got there

A communications engineer, Jabri was arrested in November 2012 at the Syrian border with Lebanon. Under torture, a friend had given his name to the Syrian secret service as a member of the opposition.

But Jabri had already encountered the regime’s brutality after his first arrest at a 2011 demonstration. Right from the start, when they were brought to prison, prisoners were dragged around by their hair and had their heads knocked against the metal rods of their chairs.

Jabri isn’t surprised that video and photographic accounts of such incidents have emerged. “They document everything,” he explains, “so that they have proof for their bosses that they’re doing something about terrorists.”

He was freed after a few days and a few beatings. But Jabri will never forget what happened to him when he was arrested the second time at the border.

“There were 35 people in a cell of nine square meters,” says the former prisoner. “We had to take turns sleeping. Eight people would lie near the entrance and five by the toilet, which was the most uncomfortable place.” Urine and excrement leaked from the toilet so the wounds of those with injuries from being tortured often became seriously infected.

Though it was so hot in the cell that prisoners were usually in their underwear, everybody held on to their clothes because they could at any minute be called to the torture chamber — and being beaten through clothes was easier to stand than on bare skin.

On one of the cell walls a former prisoner had written: We didn’t die, but we saw those who did. “When I read that,” Jabri says with tears in his eyes, “I really believed that was where I would die.”

As he speaks to a visitor, Jabri can now no longer sit down — he’s too agitated as he sketches the layout of his former cell and the prison tract on a piece of paper. “When I remember all this I get much too nervous,” he says, drawing frenetically. “This was my cell, then there were 18 more cells behind here as well as some tiny individual cells. There were rats that gnawed on food and bit the prisoners.”

He then draws a passageway. “These are the metal frames that up to five handcuffed prisoners were strung up on,” he says. Jabri hung there, his eyes covered, once for 12 hours, once for 16 hours, then for two days and finally for five entire days. “And you were constantly being beaten with a cable or a stick.” Once, he was raped with the stick after which his torturers stuck it in his mouth. “Taste good?” an officer asked.

A guard slept in the tract. When he was awakened by screams of pain, he would dish out extra beatings. “One officer was particularly bad,” Jabri recalls. “His name is Saleh Ali. He thought he was God.”

When Jabri wasn’t hanging on the metal frame, he got electro shocks behind his head and on his genitals. “Old and weak people couldn’t take it,” he says, and soon their cries would get weaker before going silent, as they slipped toward death.

“The guards particularly liked to deliver blows to your fingernails. Your fingers swell so much that you can’t eat anymore — that is, if we got anything edible.” Mostly there was a dish with olive oil for everyone to share. The exception was lentil soup, but it had so much water in it there was no trace of any actual lentils, he says. “There was never enough for everybody. How can you eat without bread or even a spoon?” he asks, adding that those imprisoned for longer periods began to starve.

In Jabri’s tract there were also 10 cells full of female prisoners. Between 16 and 24 years old, they were obscenely insulted and debased by the guards, but Jabri didn’t know whether, as other female former prisoners have reported, they were raped.

He remembers a 13-year-old boy who was in his cell. They accused him of the murder of 15 policemen, and of stealing a machine gun and killing five street wardens with it. “When the boy said he was much too weak to use a machine gun, they switched the accusation to his uncle who was also in prison,” says Jabri, characterizing the system as entirely arbitrary.

Jabri was fingerprinted and made to sign a 15-page record of interrogation with bound eyes. “That was the case for everybody. Nobody knew what the officials had written on the papers we signed.”

Miraculously, after more than two months, Jabri was freed. He was one of the 2,250 prisoners released by President Bashar al-Assad’s regime in exchange for 48 Iranians kidnapped by Syrian rebels. Today Jabri works for Hawa Smart, the Syrian revolutionary radio station in Gaziantep, Turkey, along the Syrian border.

Torture in Aleppo too

Ahmed Primo, another member of the opposition, who like Jabri is committed to peaceful action for democracy, also paid a high price. “Except I was imprisoned in Aleppo,” the 28-year-old says. “It’s not as bad there as in Damascus, but I was also tortured systematically, like everybody else in the prison I was in.”

Primo is not as talkative as Jabri. He still seems to be traumatized. The media activist was only freed Jan. 9. He survived for a month in the regime’s prisons but then was kidnapped by an ISIL (Islamic State of Iraq and the Levant) rebel group. The al-Qaeda group held him for 53 days because of his criticism of the radical organization.

“Like the regime, they tortured me with electro shocks under the tongue and on my genitals. I was also strung up for days on end,” he says. He found it particularly difficult to deal with the fact that his torturer turned out to have been an old friend. “During the first days of the revolution, we had both demonstrated against Assad. But later he joined ISIL,” Primo says.

The ISIL prison was located in a children’s hospital in the Kadi Asker section of Aleppo. Primo was also lucky. During his imprisonment fighting broke out between the al-Qaeda group and some Free Syrian Army (FSA) brigades. Primo’s name had already been placed on the list of prisoners to be executed, but things turned out differently.

The FSA attacked the hospital, and ISIL made a hurried withdrawal, which meant there was no time to round up the prisoners and shoot them. So Primo, along with some 200 others, was freed. He too is currently in Gaziantep, Turkey. He says he harbors no feelings of vengeance, either against the regime nor against the friend who tortured him.

“I’m not a soldier and don’t have much truck with weapons. What I’m looking for is work through which I can foster the revolution peacefully.” He shows a visitor the large scars from the torture on his hands and knees. So much pain, so much brutality.

The reports from these two men offer precious living evidence of the brutality inflicted, but also make it harder than ever to imagine a day of reconciliation in a new Syria.