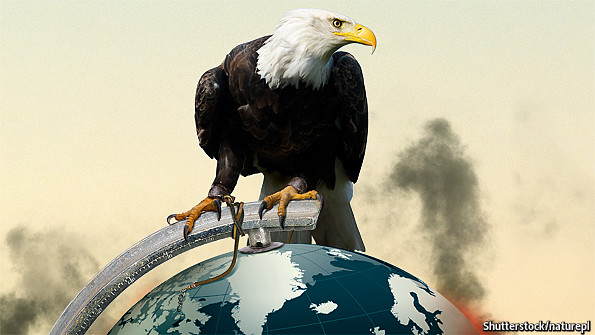 “WHY is it that everybody is so eager to use military force?” America’s cerebral president betrayed a rare flash of frustration on April 28th when dealing with a question in Asia about his country’s “weakness”. Barack Obama said his administration was making steady, if unspectacular, progress. By blundering into wars, his critics would only harm America.

Mr Obama was channelling the mood of his people, worn out by the blood and treasure squandered in Iraq and Afghanistan. A survey last autumn by the Pew Research Centre suggests that 52% want the United States to “mind its own business internationally”, the highest figure in five decades of polling. But when America’s president speaks of due caution, the world hears reluctance—especially when it comes to the most basic issue for any superpower, its willingness to fight.

For America’s most exposed allies that is now in doubt (see article). For decades, America’s security guarantee used to underpin Japan’s foreign policy; now, on his Asian tour, Mr Obama has had to reassure Japan that it can count on America if China seizes the disputed Senkaku islands (which China calls the Diaoyus). After his tepid backing for intervention in Libya and Mali and his Syrian climbdown, Israel, Saudi Arabia and a string of Gulf emirates wonder whether America will police the Middle East. As Vladimir Putin, Russia’s president, disrupts Ukraine, eastern Europeans fret that they are next.

Each situation is different, but in the echo-chamber of global politics they reinforce each other. The Asians note that in 1994, in exchange for surrendering nuclear weapons, Ukraine received a guarantee from Russia, America and Britain that its borders were safe. The Baltic countries remember the red lines crossed in Syria. Arab princes and Chinese ambassadors count the Republican senators embracing isolationism. Together, these retreats plant a nagging suspicion among friends and foes that on the big day America simply might not turn up.

A poisonous root
Admittedly, deterrence always has some element of doubt. Between the certainty that any president will defend America’s own territory and the strong belief that America would not fight Russia over Ukraine lies an infinite combination of possibilities. A lot depends on how each incident unfolds. But doubt has spread quickly in that middle ground—and it risks making the world a more dangerous, nastier place.

Already, regional powers are keener to dominate their neighbours. China is pressing its territorial claims more aggressively, Russia interfering more brazenly. In 2013 Asia outspent Europe on arms for the first time—a sign that countries calculate they will have to stand up for themselves. If Mr Obama cannot forge a deal with Iran, the nightmare of nuclear proliferation awaits the Middle East. Crucially, doubt feeds on itself. If next door is arming and the superpower may not send gunboats, then you had better arm, too. For every leader deploring Mr Putin’s tactics, another is studying how to copy them.

Such mind games in the badlands of eastern Ukraine and the South China Sea may feel far away from Toledo or Turin. But the West will also end up paying dearly for the fraying of the global order. International norms, such as freedom of navigation, will be weakened. Majorities will feel freer to abuse minorities, who in turn may flee. Global public goods, such as free trade and lower cross-border pollution, will be harder to sustain. Global institutions will be less pliable. Americans understandably chafe at the ingratitude of a world that freeloads on the economic, diplomatic and military might of the United States. But Americans themselves also enjoy the exorbitant privilege of operating in a system that, broadly, suits them.

A hegemon’s headaches
The critics who pin all the blame on Mr Obama are wrong. It was not he who sent troops into the credibility-sapping streets of Baghdad. More important, America could never sustain the extraordinary heights of global dominance it attained with the collapse of the Soviet Union. As China grew into a giant, it was bound to want a greater say. And the president has often made the right call: nobody thinks he should have sent troops to Crimea, despite the breaking of the 1994 agreement.

Yet Mr Obama has still made a difficult situation worse in two ways. First, he has broken the cardinal rule of superpower deterrence: you must keep your word. In Syria he drew “a red line”: he would punish Bashar Assad if he used chemical weapons. The Syrian dictator did, and Mr Obama did nothing. In response to Russia’s aggression, he threatened fierce sanctions, only to unveil underwhelming ones. He had his reasons: Britain let him down on Syria, Europe needs Russian gas, Congress is nervous. But the cumulative message is weakness.

Second, Mr Obama has been an inattentive friend. He has put his faith in diplomatic coalitions of willing, like-minded democracies to police the international system. That makes sense, but he has failed to build the coalitions. And using diplomacy to deal with the awkward squad, such as Iran and Russia, leads to concessions that worry America’s allies. Credibility is about reassurance as well as the use of force.

Credibility is also easily lost and hard to rebuild. On the plus side, the weakened West, as we dubbed it after the Syrian debacle, is still stronger than it thinks. America towers above all others in military spending and experience (see article). Unlike China and Russia, it has an unrivalled—and growing—network of alliances. In the past few years Malaysia, Myanmar, Vietnam and the Philippines have all moved towards it, seeking protection from China. And events can sway perceptions. Back in 1991 George Bush senior’s pounding of Saddam Hussein vanquished talk of America’s “Vietnam syndrome”.

But there will be no vanquishing as long as the West is so careless of what it is losing. Europeans think they can enjoy American security without paying for it. Emerging-world democracies like India and Brazil do even less to buttress the system that they depend on. America is preoccupied with avoiding foreign entanglements. Mr Obama began his presidency with the world wondering how to tame America. Both he and his country need to realise that the question has changed.