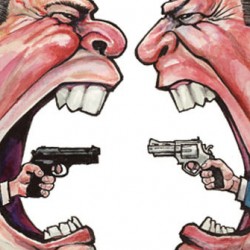 “Freedom had been hunted round the globe; reason was considered as rebellion; and the slavery of fear had made men afraid to think. But such is the irresistible nature of truth, that all it asks, and all it wants, is the liberty of appearing.”  – Thomas Paine

The label of “fringe” is a common one used by statists, bureaucrats and paid shills in order to marginalize those who would stand against government corruption. The primary assertion being sold is that the “majority” joyously supports the establishment; and the majority, of course, is always right.

The liberty movement, which is a collection of numerous freedom organizations and political activists brought together by a shared philosophical bond, has been accused of “fringe” status for quite some time. With corporatist dominance over the mainstream media for decades backing an elitist machine in Washington and a global banking cartel footing the bill with money created from thin air, any such accusation can be made to seem “real” to those who are unaware.

The problem has always been a matter of physical action giving rise to an acknowledgment of numbers.

We have all heard the old story of the debate within the ancient Roman government over the idea of forcing the slave population to wear distinct armbands so that they could be more easily identified among the regular population. The concept was rejected on the realization that if the slaves were given a visual confirmation of their considerable numbers and strength, they would be encouraged to revolt against the Roman tyrants. That is to say, as long as the slaves felt isolated, they would remain apathetic and powerless. Of course, that was not always the case. Sometimes, a small group would stand up despite their supposed isolation, and the rest of the world, wide-eyed and astonished, would take notice.

The liberty movement has just experienced one of its first great moments of realization and empowerment in Clark County, Nev., and millions of past naysayers have been shell-shocked.

I covered my views in detail on the Bundy Ranch saga in Nevada in my article “Real Americans Are Ready To Snap,” amid the usual choir of disinformation agents and nihilists desperate to convince Web audiences that the liberty movement would do nothing to stop the Bureau of Land Management’s militant assault on Cliven Bundy’s cattle farm. This assault included hundreds of Federal agents, helicopters, contractors hired essentially as cattle rustlers and even teams of snipers.

The statists and socialists were certainly out in force to misrepresent the Bundy issue and frighten anyone who might consider taking a stand for the family. The Southern Poverty Law Center, not surprisingly, was hard at work spreading lies and disinformation about the confrontation in Nevada, painting a picture of fractured patriot groups and militiamen with “little training” going to face unstoppable Federal BLM agents and likely “ending up dead.” The SPLC insinuated that the movement was ineffective and in over its head.

The reality was much the opposite. Liberty groups arrived in droves and were staunchly unified — not by a centralized leadership, but in defense of the basic moral principles outlined in the U.S. Constitution and Bill of Rights. Sources on the ground at the Bundy ranching operation relayed to me that at least 1,000 activists and militia members arrived over the weekend, with many more on the way. This one event proved certain points:

Over the past weekend, we witnessed the true influence of the liberty movement. As thousands of activists and militia arrived in the area, the BLM finally began to understand what it was facing. The government agency that has been terrorized farming communities throughout the West for years, the agency armed with military-grade weaponry and hundreds of agents, ran away, as freedom fightersdescended on the region.

Nevada Governor Brian Sandoval and Clark County Sheriff Doug Gillespie, two politicians who were deathly silent during the beginning of the Federal incursion on the Bundy ranch, have now suddenly become vocal in defense of Nevada ranchers against the BLM. It’s amazing how “inspired” politicians can become to do the right thing when they see an army of liberty activists marching against tyranny in their own backyard.

Not only was the BLM forced to remove itself from the area, but it was also forced to relinquish all the cattle it had stolen from Bundy over the course of the past week. Here, liberty groups close in on the cattle holding pens of the BLM and take back Bundy’s property.

Statists are indignant and furious over the surrender of the BLM. The same people who boasted that liberty activists would be slaughtered by Fed agents are now frothing at the mouth because they did not get their massacre. Not only that, but the bureaucracy they worship has shown itself to be impotent in the face of Constitutional champions. All I can say is nothing puts a bigger grin on my face than to see statists cry like babies when their delusions of grandeur are trampled on.

This was a major victory for the liberty movement. But let’s be clear; the fight is just beginning.

I suspect that the Bundy event will be spun by news agencies and the government until it is unrecognizable. They will claim that the BLM left not because they were wrong, but because they were trying to keep people safe. They will claim that liberty movement protesters were the aggressors and the poor BLM agents were just trying to do their jobs. They will play the race card as they always do, much like this pathetically lazy and unprofessional article from Slate, which asserts that if the Bundy’s had been black, the Liberty Movement would have never supported them. They will argue the so-called Federal legality of the raid itself, and paint Bundy as a “freeloader” who refuses to pay taxes and who is living off the American people. They will do everything in their power to destroy the image of the victory and soil the name of the Bundy family.

What they don’t seem to understand, though, is that the liberty movement does not care what the Federal government deems “legal” or “illegal.” Our only interest is what is Constitutional and what is moral. The dispute was never about the “legality” of Bundy’s use of the land, which his family used for grazing without interference for generations — until 1993, when the BLM used the absurd endangered species protection racket to put all of his neighbors out of business and threaten his ranch with invasion.  Add to this the recently discovered fact that Senator Harry Reid’s former assistant and friend Neil Kornze is now head of the BLM due to Reid’s influence, and the fact that Harry Reid and his family are reaping financial rewards by driving farmers from all over the region where Cliven Bundy’s ranch sits while arranging land deals with Chinese solar companies, and one has to ask, why should Bundy pay any of his hard earned money to the federal government when they are just going to use it to bulldoze his cattle and make Harry Reid more rich?

Disinformation websites like Snopes contend that Reid’s “projects” are not being established anywhere near the Bundy Ranch, yet, one such project has already been launched only 35 miles south of Bundy, and, the BLM has erased a page from its website specifically mentioning the Bundy Ranch and it’s“interference” with Dry Lake Solar Energy Zone Projects, the same projects Harry Reid and his son are heavily involved in.

What is amazing to me is that in light of this information hardcore socialists are still willing to defend Reid and the BLM.  My question is, if the BLM is so innocent, then why are they erasing such data from their website at all?  What were they trying to hide?

Harry Reid has not responded to the facts behind his financial involvement in the BLM’s attacks on Nevada farmers, except to say that they are “conspiracy theories”.  He added when asked about the status of the confrontation:

“Well, it’s not over. We can’t have an American people that violate the law and then just walk away from it. So it’s not over…”

Yes, Harry, it won’t be over until men like you are thrown behind bars.

Note that he says “an American people”; as if he is separate, as if he is referring to all of us as a subservient organism, or servant class.  What Reid is saying is, the elites can’t have “an American people” openly exposing their criminality and defying their tyranny, and then just walking away.  I’m sorry to break it to Reid, but that is exactly how all of this is going to end.

Statists and bureaucrats like Reid continually attempt to argue this issue from the standpoint of Federal legality, obviously because the Federal government has the legislative and bureaucratic power to make any despicable action legal (at least on paper) if it wishes. However, the liberty movement has no interest whatsoever in Federal interpretations of legal precedence. We are only concerned with what is right. As the old saying goes, when injustice becomes law, rebellion becomes duty.

The liberty movement also fully understands that the Bundy victory was only one battle at the beginning of a long war.

The BLM may very well be waiting for activists to leave the area before attacking again. And even if that is not the case, tyrannical systems have a way of attempting to make up for signs of weakness by escalating violence during the next siege. That is to say, we should expect the next event involving the BLM or other government agencies to be even more vicious than the Bundy incident. It is simply the natural inclination of totalitarian systems to exaggerate their power when their failings have been exposed.

That said, it should be noted that corrupt leadership often crumbles in the face of steadfast resolve and courage. We have a long way to go before this Nation is once again truly free, but the liberty movement has proven its invaluable worth over the course of the past several days. We arrived at a crossroads, and we are now moving forward in the right direction — without fear and without regret. It is in these moments when history is made — when common men and women thwart the odds, defy the darkness and make good on their beliefs by risking everything in the name of freedom.