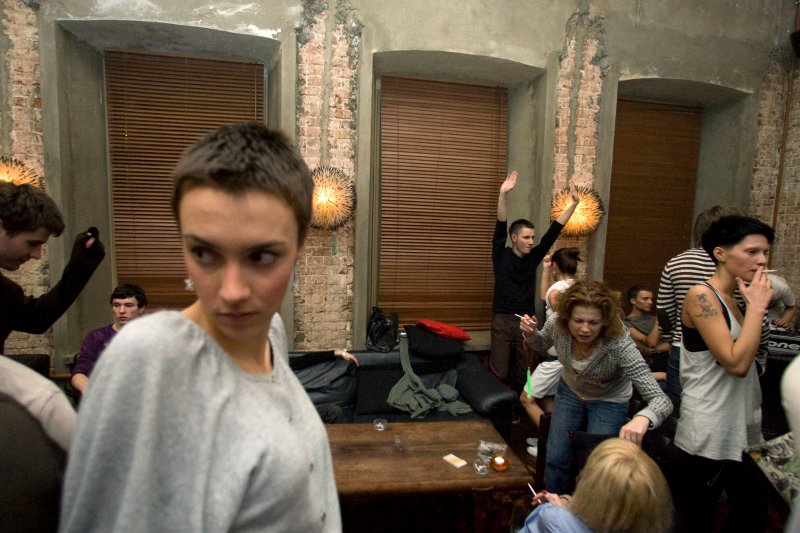 A Virtual Iron Curtain Closes In on Russia’s Intelligentsia

Even before the crisis in Crimea, Moscow’s creative class was in trouble. Now the Russians who call themselves hipsters feel like strangers in their own homeland.

Every morning last week, public relations specialist Roman Fedoseyev dreaded going online, fearful he would find news that the Russian army had crossed the Ukrainian border. The crisis called Crimea haunts the dreams of Fedoseyev and his friends in Moscow’s creative class, or “hipsters” as they call themselves, using a word borrowed and made their own. But when they wake, they keep hoping life can go on as usual. The sad thing is, it won’t.

The authorities already have closed media outlets, attacked pro-Western theaters and cinemas and adopted laws aimed against any alternative opinions. Invading the rest of Ukraine would turn Russia into a real fortress under siege. That would mean more of his friends fleeing the country or jumping into what’s called “inner immigration,” the life inside a small circle of people keeping distant from the country’s political flow; remaining liberals but keeping their opinion quiet.

Were Russian hipsters—designers, photographers, architects, stylish business managers, planning to make radical changes in the country in a fashion of Kiev’s EuroMaidan? “Absolutely not,” says Fedoseyev, who professses himself an expert on the Moscow hipster world. Every day, the free media sphere shrinks, leaving those who two years ago rallied in freezing wind on Moscow’s squares without any information, today, that they can trust. According to a law adopted last week, repeated arrests at protests that haven’t been given permits are punishable by a jail term now, not just a fine.

“On seeing activists sentenced to jail terms, many decided they were not ready to pay that high a price for fighting Putin,” Fedoseyev admitted. Russia without any free media or the right to protest is definitely going to be a more depressing place, but most hipsters speak foreign languages, and they can still read world news on the Web. They are beginning to make do. And the authorities are trying to make life fun for them.

All sorts of entertainment is being lavished on Russia’s hipsters. Their favorite public parks have splashy, beautifully designed restaurants and clubs, comfortable biking areas and luxurious places to chill. Sanctions or not, Fedoseyev’s friends can still dine out at restaurants full of expats, take shopping trips to Milan, or buy their electronic gadgets online. Fashion Week this weekend was another party blooming with charming models and celebrities; the usual hipsters clubs, Solianka, Simachev, Oldich Dress and Drink or Strelka, felt as cuddly and crowded as ever.

Yet after a drink or two words the words “sanctions,” “tanks,” “crises” and “isolation” penetrated the conversation. “Depression is in the air,” says photography Max Avdeyev, “The most popular topic dwelled upon is ‘We want to pack and go, the question’s where.’” These are the same people who used to call themselves “hipster revolutionaries.” But the revolution showed itself largely ineffective. And as Avdeyev is the first to admit, they belonged to a tiny minority of well-traveled, well-educated Putin critics in a country where over 70 percent of the population supported their leader; and only 17 percent had “foreign” passports to travel abroad.

None of the opposition programs sounded inspiring to Abdeyev, either. “Who of Soviet dissidents should we look up to today? Even the most famous of them, the author of The Gulag Archipelago, Alexander Solzhenitsyn, supported Putin at presidential elections,” Avdeyev insisted.

A recent survey of listeners by Echo of Moscow radio (which still preserves most of its editorial independence) demonstrated that 70.8 percent of the radio’s audience considered European values harmful for Russia. What are Western values, the hosts asked? One of the listeners, a young Muscovite, interpreted the values, “as freedom for a human body and desires, all sorts of pedophilia and zoophile love.” And Echo of Moscow has one of the most pro-Western audiences in Russia.

Within days, the anti-Western line drawn to connect the dots of supposed Western decadence reached theaters and movie theaters. Attacks on Moscow’s popular Taganka and Gogol Center theaters, accused of producing performances that “promoted violence, homosexuality, pedophilia, suicide” shocked the theater world. Copying the Korean and Chinese experience, the ruling party United Russia drafted a new law to cap the number of foreign movies released in Russia, down to 50 percent, so instead of “American values” and “propaganda of American interests” Russians would watch Russian movies.

Yet no hipsters came out to defend their favorite cultural institutions. Most of them still believed that for as long as they were still allowed to take a break from Russia in Paris or Venice, escape to India or Thailand in winter and to New York in summer, they could continue their creative, comfortable lives, living in fear of a new Iron Curtain, perhaps, but not quite convinced it was coming.

Some hipsters even contributed money to keep their favorite TV channel, Dozhd, on air, or at least online, after the government cut off its cable distribution. But Dozhd correspondent Timur Olevsky has no illusions. He and his colleagues cannot do a proper job covering the news because they no longer have access to newsmakers. “Russia,” he said, “has already shut the iron curtains from within.”