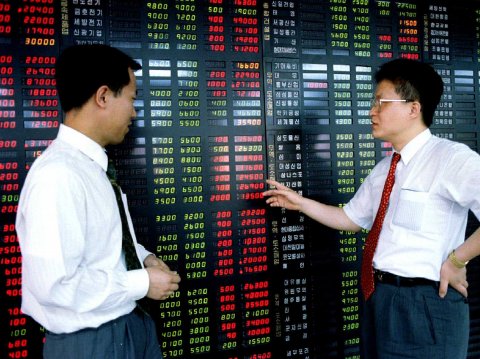 Unlike in the West, being a kleptocratic crook in China is now becoming a higher risk proposition. One gets the sense that as the credit monster collapses in China, and as auntie’s wealth management product is shown to be a loss, out will come the pitch forks. Seizures, arrests and even executions will become the order of the day.

It is not too difficult to understand how these kleptocrats stuffed an estimated $1 to 4 trillion into overseas banking accounts, which I’ve dubbed “the ratline.” In the real estate part of the equation, first corrupt local officials seize the land of farmers. The windfall extraction occurs when the land is effectively rezoned for constructing ghost buildings and cities. Then, in an greatly expanded version of the U.S. savings and loan fraud of the 1980s, cronies in Chinese banks make shady loans to “developers.” In turn, the developers throw up pie-in-the-sky projects. It’s a facade to collect fees and soft dollars, leaving the largely unsecured debt to be dealt with by other cronies and friends in government. The end result of this loot and extraction is aptly described by David Stockman in ”China’s Monumental Ponzi.”

The story around the Zhou racket is illustrative: “Chinese authorities have seized assets worth at least $14.5bn from family members and associates of retired domestic security chief Zhou Yongkang, who is at the centre of China’s biggest corruption scandal in more than six decades, according to Reuters news agency. More than 300 of Zhou’s relatives, political allies, proteges and staff have also been taken into custody or questioned in the past four months.”

As some examples, such as Li Peiying, are executed and the Chinese economy implodes, it is even more imperative for kleptocrats to get their ill-gotten gains and banal personas into the global offshore ratlines.

In recent years, one of those ratlines was in Canada, but that country has grown weary of the inflated, high-end real estate bubble prices and the behavior endemic of kleptocratic criminals and decided to pull the plug [see South China Morning Post] on its investor visa scheme. More than 45,500 waiting in the queue will need to seek other destinations aka refuge.

One of those new locales is the U.S., where wealthy Chinese are lined up for green cards. One of the planted promotional ploys that these Chinese kleptocrats are using is a scam making the rounds that they “are investing in Detroit.”  To the average American, that sounds like a prospect for urban renaissance. However, the reality indicates this is a falsehood and a red herring [see NPR’s “Chinese Investors are Not Snatching Up Detroit Property“].

Until recently, details surrounding the secretive Chinese offshore ratline story have been widely speculated upon but remained largely unknown. Files obtained by the International Consortium of Investigative Journalists (ICIJ) reveals that nearly 22,000 offshore clients with addresses in mainland China and Hong Kong appear in a cache of 2.5 million leaked files.

Among them are some of China’s most powerful men and women — including at least 15 of China’s richest, members of the National People’s Congress and executives from state-owned companies entangled in corruption scandals.

ICIJ has the details on a number of Chinese ratliners in its highly revealing article. In my view, this investigative journalism is right up there with Edward Snowden’s revelations. In some cases, these corrupt players are already serving jail time in China as their loot sits in offshore accounts. The case of Zhou Zhengyi is illustrative.

Pricewaterhouse Coopers, UBS and other western banks and accounting firms play a key role as middlemen in helping Chinese ratline clients set up trusts and companies in the British Virgin Islands (BVI), Samoa and other offshore centers. ICIJ report states: “Tax Justice Network, an advocacy group, says BVI offshore entities have been linked to ‘scandal after scandal after scandal’ — the result of a corporate secrecy regime that creates an ‘effective carte blanche for BVI companies to hide and facilitate all manner of crimes and abuses.”

The BVI, in turn, ties in as a money source for international banking cartels operating out of the City of London in particular.  That cozy arrangement between Chinese kleptocrats and offshore bankers thereby germinates other loots and speculative bubble-blowing activities. Who says crime doesn’t pay.