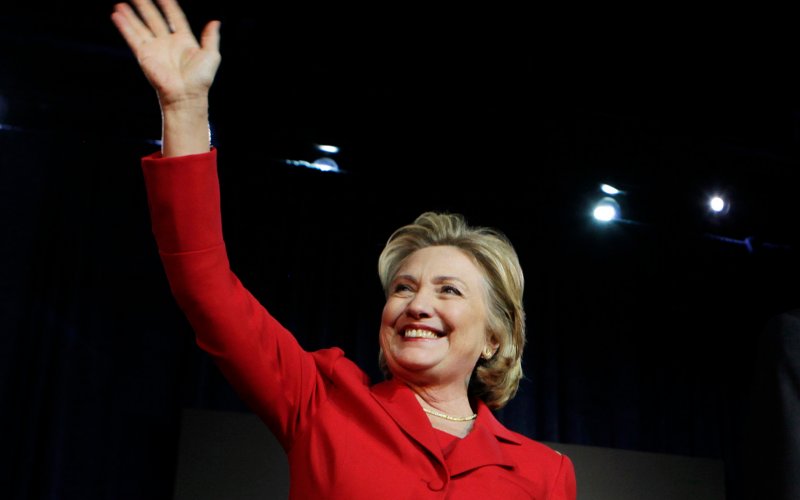 Yes, Pundits, Hillary Has the 2016 Nomination in the Bag

Unable to tolerate the idea of a one-woman race, political pundits are pretending Hillary Clinton isn’t the inevitable 2016 Democratic nominee. They couldn’t be more wrong.
Handicappers in the presidential race abhor the opposite of a vacuum—a campaign two years out where one candidate seems to blot out the entire field. Thus a mini-chorus now rises, and may swell, questioning Hillary Clinton’s apparent lock on the 2016 Democratic nomination. It’s a predictable reflex, but in cold, hard reality, logic suggests that the lock is authentic, not just apparent. And in modern history, or virtually all American history, Hillary’s inevitability is unprecedented for a non-incumbent.

First, the logic. Who can seriously challenge her march toward a closing night acceptance speech at the next Democratic convention?

With a deft touch of humor more enjoyable than enlightening, Matt Bai suggests that Hillary is “no more likely to clear the Democratic field and avoid a primary … than Dennis Rodman is to become her Secretary of State.” Her fundraising advantages and her strength among “party regulars” make “her vulnerable to another grassroots challenge.”

But history doesn’t metronomically repeat itself. There is no Barack Obama waiting in the wings this time—and the last time, he wasn’t exactly in the wings. He had captured the party’s attention and admiration from the moment he commanded the national spotlight with a stunning keynote speech at the 2004 convention. It’s utter mythology that he came out of nowhere in 2007; some of the smartest Democrats, including Clinton loyalists like Greg Craig, who had defended the president during impeachment proceedings, signed on with Obama early on.

MSNBC’s Krystal Ball has her version of the 2016 Obama, and argues that Hillary shouldn’t run because the “moment” calls for someone like Massachusetts Senator Elizabeth Warren, someone “clearly passionate, living and breathing and feeling … the plight of the worker, the middle class.” Hillary, Ball asserts, can’t do that because she was once on the board of Walmart and recently accepted speaking fees from Goldman Sachs. That attack, if an opponent advanced it, could and would be swiftly confounded by the Hillary who, in the penultimate primaries of 2008, in places like Pennsylvania and Ohio, emerged as a powerful, persuasive tribune of blue-collar and middle-class Americans.

Of course, there is another slight problem with the Warren option: She’s joined all the other Democratic women senators in signing a letter urging Hillary to run. Warren will probably be out there all right—stumping for Hillary, not against her.

But let’s not stop here. Where would a grassroots challenger find the resources to mount a credible campaign? Obama relied heavily on the Internet. And Hillary’s commanding position among big givers shouldn’t obscure a decisive truth: the fundraising prowess of her own yet-undeclared campaign, and of outside groups like Ready for Hillary, is not the driver of her dominance, but a reflection of it. Most small donors on the Internet and social media are likely to flock to her. In the latest Washington Post/ABC poll, she has a six-to-one lead among Democrats. That is replicated in survey after survey. Women voters overwhelmingly support her, with younger women adamantly for her. So are the young in general—and Democratic men as well.

Hillary also defeats every Republican by at least eight points in the new McClatchy-Marist numbers —and trounces Chris Christie, once the most electable Republican, whose ratings have fallen off the George Washington Bridge, by 21 points. This matters deeply to Democrats; most of them bear no resemblance to the Tea Party purists who crave kamikaze candidates like Ted Cruz or Rand Paul. Democrats are intent on holding the White House for 12 or 16 years because so much hangs in the balance, from economic fairness and Obamacare to the cause of climate change and the make-up of the Supreme Court.

The other current pundit staple is that maybe Hillary won’t run. Don’t bet on it. If she sat out 2016, the odds on favorite would probably be another veteran of the primary gauntlet, Vice President Joe Biden. But he’s a good guy, maybe the most effective Veep ever, and he doesn’t deserve a bad political ending. When Hillary enters the contest—she will as long as she’s healthy, and despite empty rumors there’s no reason to doubt that—I hope Biden doesn’t run and I believe he won’t. New York Governor Andrew Cuomo can’t; he would lose his and her own state to Hillary and he would be gone before the primaries ever got there. His financial base prefers her. Former Maryland Governor Martin O’Malley would struggle financially too, and would lose early on. Maybe he’ll jump in anyway, in hopes of a vice presidential nod.

I wouldn’t recommend it, but there’s no accounting for miscalculation. Howard Dean could declare—in the end, he won’t— or former Montana Governor Brian Schweitzer could campaign on a pro-gun platform. At most, each could play a bit part before being dispatched forthwith.

Historically we have seen nothing quite like this; if not never, then hardly ever. In 2000, Al Gore became the only non-incumbent to win every primary and caucus; but he nearly lost New Hampshire to Bill Bradley, which would have consigned Gore to a long slog to the nomination. In 2004, John Kerry nearly duplicated Gore’s feat, but he had been utterly written off before his surprising upset victory in Iowa.

In the distant past, two non-incumbents sauntered to nomination because they were imposed by their immensely popular immediate predecessors: Martin Van Buren by Andrew Jackson at the second Democratic convention ever held in 1836, and William Howard Taft by Theodore Roosevelt in 1908—although Taft had lost two of the four first ever Republican primaries. William Jennings Bryan won the Democratic nomination unanimously in 1900 after his opponent, Admiral George Dewey, the Spanish-American war hero, repeatedly tripped over his own tongue and was out of the race two months before the convention.

It was another war hero, Ulysses Grant in 1868, whose situation most closely parallels Hillary’s. His predecessor in the White House, who had barely avoided conviction in an impeachment trial, didn’t and couldn’t impose any candidate on the Republican Party. On the strength of his own position, Grant prevailed unopposed. In this very different era, 2016 may see other names on Democratic primary ballots, but they will prove to be tokens, not threats.

The last refuge of the Hillary doubters is that she won’t learn from the past and will repeat the mistakes of 2008. It’s a telling admission that the only person who can defeat or dent Hillary Clinton on the road to her nomination is Hillary Clinton. But as I’ve already noted, she was a changed and far better candidate by the end of her contest with Obama. In 2016, her message won’t center on her experience—that will speak for itself. It won’t be a call to restore the Clinton years or merely continue the Obama years. Obviously she won’t run against the Obama record, but for something beyond it. She’s smart, and she knows she has to offer a vision for the future. And her tempered tone now is exactly right: she shouldn’t be setting out that vision in the off-season, but when the country rather than the political class actually turns its eyes and ears to the campaign. (In fact, that’s what Bill Clinton did in a series of big picture speeches in 1991.)

Nor will Hillary repeat the tactical blunders, disarray and mismanagement of her previous presidential effort. She will rely on both newer, younger people and the best of her past political advisors like Harold Ickes and pollster Geoff Garin, who came on and became a guiding strategic force in the later stage of 2008, when she was steadily gaining ground. Ready for Hillary has already recruited top Obama organizers who have mastered 21st century ways to communicate, micro-target, and turn out voters. Finally, surprise of surprises, Bill Clinton will confound the skeptics: he will play an invaluable supporting role, a plainly influential but subordinate one. He is a great campaigner, the best in a generation, who won’t freelance his own alternative campaign.

There is criticism that all the talk of inevitability hurts Hillary. But Hillary and those who are close to her have never suggested publicly that she’s inevitable. Out in Iowa, and then in New Hampshire, she will insist over and over, as she should, that she is taking no vote for granted. She hasn’t even said she’s running yet, although she is. And all this is just the way things are. Operatives and observers can’t help noticing it and writing and broadcasting it—and there are journalists who, well, inevitably push back against it. That’s in their occupational DNA.

The Republicans know it too. From contorted Benghazi conspiracy theories to Rand Paul’s babble about Monica Lewinsky, they are attacking Hillary fiercely because they fear her most. And they should be very, very afraid.

Ulysses Grant was a long time ago; today Hillary Clinton is in all but unique situation in our presidential politics. No, Dennis Rodman won’t be anybody’s Secretary of State. But Hillary will win the 2016 Democratic nomination. Maybe, more than maybe, she already has.