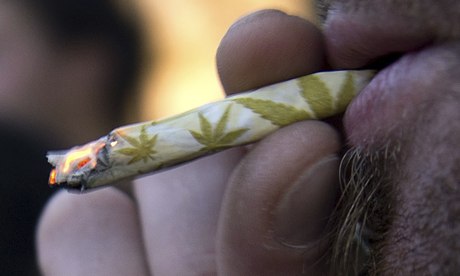 Uruguay sets price of legalised cannabis at $1 a gram
Country likely to become first to have state-controlled marijuana industry, and hopes low price will push traffickers out of market

A Uruguayan man smokes cannabis during a demonstration in Montevideo in May. A senate vote to legalise the drug is expected in November. Photograph: Pablo Porciuncula/AFP/Getty Images
Uruguay is set to become the first country in the world where the sale of cannabis will not only become legal and government-controlled, but at around $1 a gram probably also the one with the most affordable marijuana anywhere.

A senate vote to legalise the drug that is expected in mid-November as part of an effort in the South American country to explore alternatives in the war on drugs.

The head of Uruguay’s National Drugs Board, Julio Calzada, said the government would set the price of cannabis low in the hope of pushing drug traffickers out of the market.

“The illegal market is very risky and of poor quality,” he said. “The price of marijuana from Paraguay that gets sold on the streets here is about $1 a gram, so we’re going to set the price of government-controlled cannabis at around that same price. We want to snatch the market away from the drug traffickers.”

It will take a few months after that to organise a system through which cannabis will be sold freely at pharmacies.

“The system will be in place around mid-2014,” Calzada told the Uruguayan newspaper El País. “So there’ll be time to harvest and start selling.”

Smoking cannabis has long been legal in Uruguay, but growing, carrying, buying or selling it has been punishable by prison terms. About 120,000 of the country’s 3.4 million population consume cannabis at least once a year, according to the National Drug Council. Of these, 75,000 smoke it every week and 20,000 every day.

“In reality, cannabis only costs about half a dollar a gram to produce in Uruguay,” said Juan Vaz,46, a computer programmer and veteran legalisation campaigner from the capital city, Montevideo. “So when the government says that by next year we could be buying it at $1 a gram, that sounds very reasonable.”

The proposed price it is considerably lower than that of legal cannabis in the US states of Washington and Colorado where the drug has already been legalised. In those American states marijuana sells for between $8 and $17 a gram.

“A friend of mine bought marijuana at $12 a gram in Colorado yesterday,” said Vas. “The difference is that in those US states marijuana is sold in an open market, while in Uruguay the price will be fixed by the state.

“It’ll be like milk. The price of marijuana will be fixed right down the line, just like the government sets the price dairy farmers get for their milk and then sets prices all along the milk supply line right down to the price of a carton of milk at the supermarket.”

The government will also be advising on how best to consume the drug. “Apart from being vulcanised or smoked, it can be vaporised, which is much less harmful, or in food such as brownies,” said Calzada.

Although the government will control the quality and set the price of the drug, production will remain in private hands. “At the beginning there was some confusion about this,” said Vas, who started campaigning for legalisation a decade ago after serving a year in prison for planting cannabis at his home.

He added: “People believed the government itself was going to plant and sell cannabis. But the government will intervene only to regulate the market, to licence land for marijuana plantations, but the whole chain of production, distribution and sale through pharmacies will be in private hands.”

Consumers will be required to enrol in a national database that will remain strictly confidential and available only for consultation by pharmacists to enforce the 40g a month limit.

“The important thing is to take away the sale of cannabis from the drug dealers,” said Vas. “As things stand today, drug dealers try to push harder drugs on teenagers who go to them for cannabis. This law will change that and prevent cannabis from at least in this sense being a step to more potent drugs.”