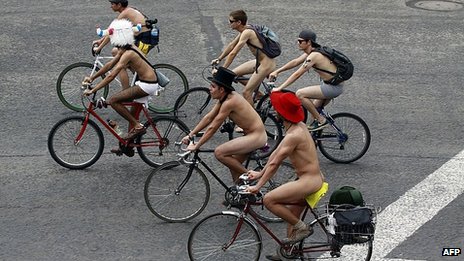 The cyclists say nakedness highlights their vulnerability on the road

Thousands of naked cyclists have ridden through the streets of Mexico City to mark the World Naked Bike Ride.

The event is to raise awareness of the importance of cycling for exercise and as a way to reduce fossil fuels.

Organisers say riding naked also highlights the fragility of the human body and the need for drivers to be more careful on busy city streets.

The movement began nine years ago in Canada and has been held every year in various cities around the world.

Traffic in Mexico City came to a standstill as onlookers stared in amazement or took photographs of the cyclists – naked or semi-naked – streaming past some of the city’s most famous landmarks.

The rally ended in Zocalo Square. 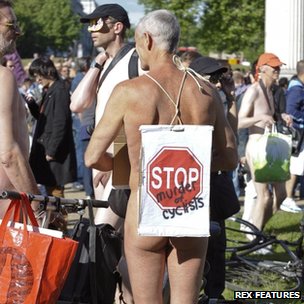 Naked cyclists also took to the streets of London

Correspondents say that although the city has introduced a series of bike-friendly policies, millions of vehicles clogging the streets every day make cycling a serious challenge.

One cyclist, named only as Mila, said stripping off was the best way to get their message across.

“In Mexico it is a nightmare to ride a bicycle,” she said. “It’s almost as if you don’t exist, you are a ghost.”

Fellow cyclist Yovana Floyd added: “We fear going out every day and not knowing if we will return to our homes.”

Mexican media estimates that about 300 cyclists took part in the demonstration.