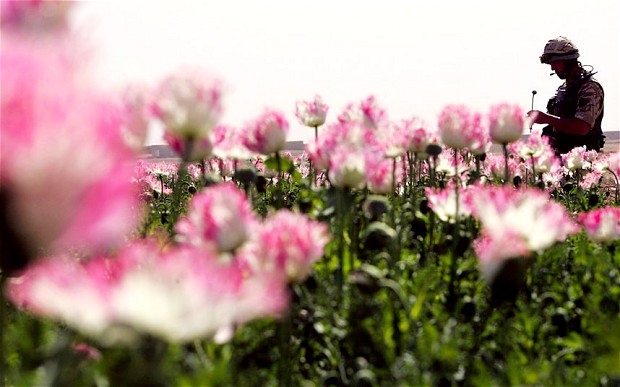 UN officials predict the increase will push this year’s crop close to 2007’s record level and again see Afghanistan responsible for more than 90 per cent of the world’s heroin.

The forecast is a heavy blow for the British government which has been at the forefront of the international war on opium and heroin since the Afghan campaign began in 2001. Helmand province, where British troops are deployed, is almost certain to retain its position as by far the biggest opium producing region in the world.

High opium prices, coupled with uncertainty over what will happen when foreign combat troops leave and a faltering legal economy were all persuading farmers to sow more of the cash crop, the survey found.

Strongmen and warlords are also expected to use this year’s harvest to fund campaign chests as they manoeuvre for next year’s presidential election and a potentially turbulent political future.

Jean-Luc Lemahieu, director of the UN’s Office on Drugs and Crime in Afghanistan, predicted this year’s crop was “getting to the same heights again as the record years.” Last year farmers grew 380,000 acres of opium, but this year’s figure was likely to be closer to the 2007 crop of 477,000 acres. Yields are expected to be high, with so far no sign of the poor spring weather or blight that spoiled the 2012 harvest.

He said: “A lot of it is hedging for an insecure future and a lot has to do with the political market, which is extremely hot at this moment. The licit economy can only provide so much when you have to buy alliances and make sure that you have the right people on your side.” Poppy growing is expected to increase in all the main opium producing provinces and fall in only one.

Speculation in the opium market has driven prices to more than £105 ($160) per kg and made it a highly attractive crop for poverty stricken farmers. Uncertainty may push the prices higher yet.

Almost all the heroin on Britain’s streets comes from Afghan opium, but Mr Lemahieu said Afghanistan’s neighbours rather than European countries would be hit hardest by the burgeoning crop. Heroin is already causing havoc in Afghanistan itself, Iran, Russia and parts of Central Asia, while the number of heroin addicts in Britain has been falling steadily in recent years.

Mr Lemahieu said the Afghan anti-drug forces were becoming more efficient and had raided 31 heroin labs so far this year, but they were unable to turn the tide.

Afghanistan’s opium economy makes up around 15 per cent of the country’s GDP and anti-drug officials fear the country risks becoming a narco-state if production continues to grow as NATO troops leave.

Taliban insurgents take some of the profits from the trade, but many believe its real damage to Afghanistan is feeding the rampant corruption which threatens to derail any attempts to build a viable state.

The British embassy in Kabul stressed the UN forecast was only a prediction, but acknowledged it was “disappointing”.

“Tackling the drugs trade will take time and we will continue to support the Afghan government in their efforts,” said a spokesman. “It is to be expected that progress will not be consistent year on year.”

A Foreign Office statement warned that the battle against opium in Afghanistan could take decades: “It is disappointing that the report predicts there is likely to be an increase in cultivation in Helmand and Kandahar, which produce the majority of Afghanistan’s opium.

It added: “In comparison to successful efforts in other countries where results have been produced over the course of generations, the counter narcotics effort in Afghanistan is relatively young.”