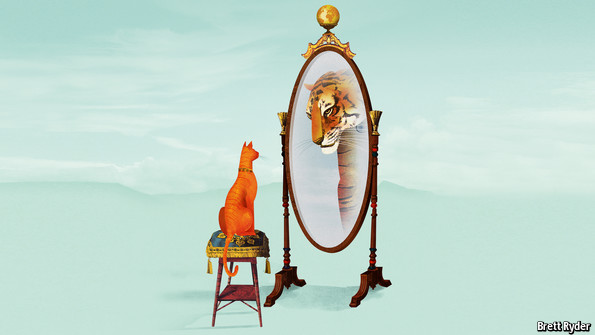 NOBODY doubts that China has joined the ranks of the great powers: the idea of a G2 with America is mooted, albeit prematurely. India is often spoken of in the same breath as China because of its billion-plus population, economic promise, value as a trading partner and growing military capabilities. All five permanent members of the United Nations Security Council support—however grudgingly—India’s claim to join them. But whereas China’s rise is a given, India is still widely seen as a nearly-power that cannot quite get its act together.

That is a pity, for as a great power, India would have much to offer. Although poorer and less economically dynamic than China, India has soft power in abundance. It is committed to democratic institutions, the rule of law and human rights. As a victim of jihadist violence, it is in the front rank of the fight against terrorism. It has a huge and talented diaspora. It may not want to be co-opted by the West but it shares many Western values. It is confident and culturally rich. If it had a permanent Security Council seat (which it has earned by being one of the most consistent contributors to UN peacekeeping operations) it would not instinctively excuse and defend brutal regimes. Unlike China and Russia, it has few skeletons in its cupboard. With its enormous coastline and respected navy (rated by its American counterpart, with which it often holds exercises, as up to NATO standard) India is well-placed to provide security in a critical part of the global commons.

India’s huge potential to be a force for stability and an upholder of the rules-based international system is far from being realized. One big reason is that the country lacks the culture to pursue an active security policy. Despite a rapidly rising defense budget, forecast to be the world’s fourth-largest by 2020, India’s politicians and bureaucrats show little interest in grand strategy (see article). The foreign service is ridiculously feeble—India’s 1.2 billion people are represented by about the same number of diplomats as Singapore’s 5m. The leadership of the armed forces and the political-bureaucratic establishment operate in different worlds. The defense ministry is chronically short of military expertise.

These weaknesses partly reflect a pragmatic desire to make economic development at home the priority. India has also wisely kept generals out of politics (a lesson ignored elsewhere in Asia, not least by Pakistan, with usually parlous results). But Nehruvian ideology also plays a role. At home, India mercifully gave up Fabian economics in the 1990s (and reaped the rewards). But diplomatically, 66 years after the British left, it still clings to the post-independence creeds of semi-pacifism and “non-alignment”: the West is not to be trusted.

India’s tradition of strategic restraint has in some ways served the country well. Having little to show for several limited wars with Pakistan and one with China, India tends to respond to provocations with caution. It has long-running territorial disputes with both its big neighbors, but it usually tries not to inflame them (although it censors any maps which accurately depict where the border lies, something its press shamefully tolerates). India does not go looking for trouble, and that has generally been to its advantage.

But the lack of a strategic culture comes at a cost. Pakistan is dangerous and unstable, bristling with nuclear weapons, torn apart by jihadist violence and vulnerable to an army command threatened by radical junior officers. Yet India does not think coherently about how to cope. The government hopes that increased trade will improve relations, even as the army plans for a blitzkrieg-style attack across the border. It needs to work harder at healing the running sore of Kashmir and supporting Pakistan’s civilian government. Right now, for instance, Pakistan is going through what should be its first transition from one elected civilian government to the next. India’s prime minister, Manmohan Singh, should support this process by arranging to visit the country’s next leader.

India should start to shape its own destiny and the fate of its region. It needs to take strategy more seriously and build a foreign service that is fitting for a great power—one that is at least three times bigger. It needs a more professional defence ministry and a unified defense staff that can work with the country’s political leadership. It needs to let private and foreign firms into its moribund state-run defense industry. And it needs a well-funded navy that can become both a provider of maritime security along some of the world’s busiest sea-lanes and an expression of India’s willingness to shoulder the responsibilities of a great power.

Most of all, though, India needs to give up its outdated philosophy of non-alignment. Since the nuclear deal with America in 2005, it has shifted towards the west—it tends to vote America’s way in the UN, it has cut its purchases of Iranian oil, it collaborates with NATO in Afghanistan and co-ordinates with the West in dealing with regional problems such as repression in Sri Lanka and transition in Myanmar—but has done so surreptitiously. Making its shift more explicit, by signing up with Western-backed security alliances, would be good for the region, and the world. It would promote democracy in Asia and help bind China into international norms. That might not be in India’s short-term interest, for it would risk antagonizing China. But looking beyond short-term self-interest is the kind of thing a great power does.

That India can become a great power is not in doubt. The real question is whether it wants to.