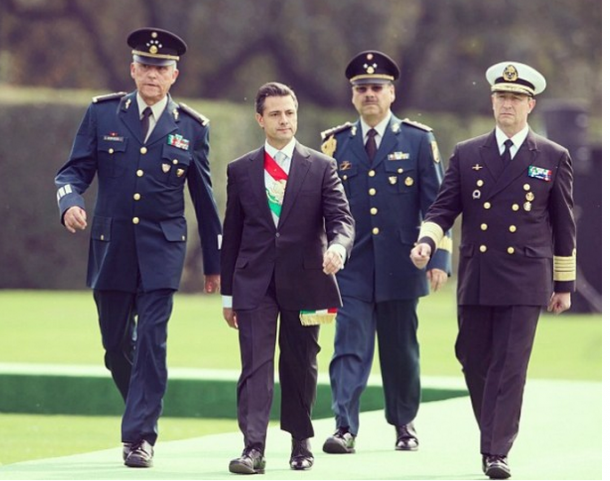 Peña Nieto has been doing well, creating good will and confidence both in Mexico and abroad.

Enrique Peña Nieto hasn’t stopped moving. Since he took over as president of Mexico, two weeks ago, he has signed enough documents and made enough promises to keep his government busy for the whole six years they have in front of them.

In his inaugural address, he laid out a 13-point plan with 13 promises to catapult Mexico into the future. Two days later he joined Mexico’s other major political parties in signing the “Pact for Mexico,” in which all of the signees agree on a 95-point action plan.

And those 95 points are not minor. The include opening the petroleum industry to the private sector and ending the state monopoly, creating universal social security and unemployment insurance, a system for evaluating teachers to improve education, providing every student in the school system with a computer, defending human rights and the rights of immigrants as well as the right to broadband internet access and the licensing of two new television channels to compete with Televisa and TV Azteca.

If he only manages to get half of the things on the list done, Peña Nieto will be the best president in Mexico’s history.

And the winds are blowing in his direction. After five years of bad news – the worst recession on the continent after the financial crisis of 2008 and a serious increase in violence from drug cartels that has left nearly 60,000 people dead – now Mexico is improving on all fronts.

Its economy grew by 5.5% in 2010, the highest growth rate seen in ten years. Mexico even exceeded Brazil’s growth rate in 2011, with 4.5% growth. This year, with a 4% growth rate, Mexico’s growth is twice that of Brazil. If growth continues at these rates, the Mexican economy could surpass the Brazilian economy by the end of the decade.

After signing the North American Free Trade Act (NAFTA) with the United States and Canada in 1994, Mexico turned into a factory for manufactured goods destined for the U.S. and Canada. Now it is a factory for the whole world. Today, Nissan is spending $2 billion to build a car factory in Aguascalientes and Audi is spending $1.3 billion on a car factory in Puebla. There are more engineers graduating annually in Mexico than in Germany, and the country is diversifying. It now has free trade agreements with 44 countries and it is the country with the most free trade agreements in the world.

The promise of a real democracy

There is good news on other fronts, too. The country’s high rate of population growth has slowed down, to the point where it will soon be lower than the United States. And emigration to the U.S. from Mexico has nearly completely stopped.

Even if the drug violence continues – and it isn’t caused by factors in Mexico, but by the American anti-drug policies – the truth is that in 2012 the number of homicides dropped for the first time in five years.

Increasing police forces and reinforcing community actions has started to have an impact in the areas most affected by the drug violence, but more is needed. The new president has promised to send 40,000 soldiers to the police and to increase the amount spent on security from about 1.5% of the GDP to 5% of the GDP.

Peña Nieto is also bringing the Partido Revolucionario Institucional (PRI) back to power, the same party that governed the country from 1929 to 2000 using corruption and electoral fraud to the point that Mexico became known as “the perfect dictatorship.”

The new president has promised a real democracy, and his Pact for Mexico shows that he is looking for alliances with the opposition to implement his proposals. And he will really need the opposition: The PRI did not get a majority in either the Senate for the House in the past election, and several of the 95 points on the action plan will require constitutional reform — which requires two thirds of the votes in both chambers of the legislature.

One other thing that he should do, although it was not one of the things he promised, is to get closer to Latin America – to build economic ties with the south and to take advantage of the commercial opportunities in all of the countries in the region, in addition to reaching out to the governments.

So far, Peña Nieto has been doing well, creating good will and confidence both in Mexico and abroad. Now we just have to hope that he does manage to do half of the things on his list. And becomes the best president in Mexican history.