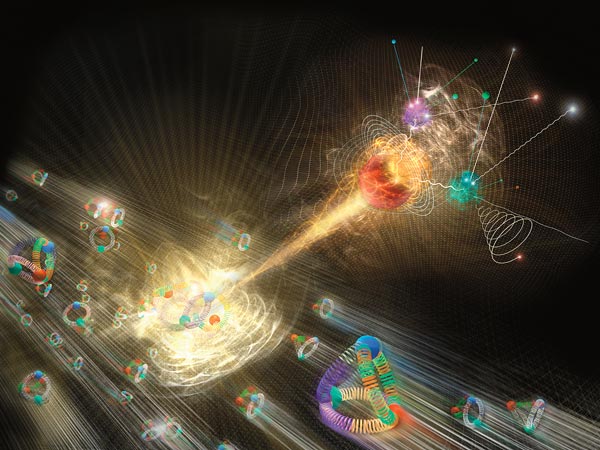 Speaking to a packed audience Wednesday morning in Geneva, CERN director general Rolf Heuer confirmed that two separate teams working at the Large Hadron Collider (LHC) are more than 99 percent certain they’ve discovered the Higgs boson, aka the God particle—or at the least a brand-new particle exactly where they expected the Higgs to be.

The long-sought particle may complete the standard model of physics by explaining why objects in our universe have mass—and in so doing, why galaxies, planets, and even humans have any right to exist.

“We have a discovery,” Heuer said at the seminar. “We have observed a new particle consistent with a Higgs boson.”

At the meeting were four theorists who helped develop the Higgs theory in the 1960s, including Peter Higgs himself, who could be seen wiping away tears as the announcement was made.

Although preliminary, the results show a so-called five-sigma of significance, which means that there is only a one in a million chance that the Higgs-like signal the teams observed is a statistical fluke.

“It’s a tremendous and exciting time,” said physicist Michael Tuts, who works with the ATLAS (A Toroidal LHC Apparatus) Experiment, one of the two Higgs-seeking LHC projects.

The Columbia University physicist had organized a wee-hours gathering of physicists and students in the U.S. to watch the announcement, which took place at 9 a.m., Geneva time.

“This is the payoff. This is what you do it for.”

The two LHC teams searching for the Higgs—the other being the CMS (Compact Muon Solenoid) project—did so independently. Neither one knew what the other would present this morning.

“It was interesting that the competing experiment essentially had the same result,” said physicist Ryszard Stroynowski, an ATLAS team member based at Southern Methodist University in Dallas. “It provides additional confirmation.”

CERN head Heuer called today’s announcement a “historic milestone” but cautioned that much work lies ahead as physicists attempt to confirm the newfound particle’s identity and further probe its properties.

For example, though the teams are certain the new particle has the proper mass for the predicted Higgs boson, they still need to determine whether it behaves as the God particle is thought to behave—and therefore what its role in the creation and maintenance of the universe is.

“I think we can all be proud … but it’s a beginning,” Heuer said.

The five-sigma results from both the ATLAS and CMS experiments exceeded the expectations of many physicists, including David Evans, leader of the U.K. team that works on the LHC-based ALICE (A Large Ion Collider Experiment) Collaboration.

Evans had predicted Tuesday the teams would announce a four-sigma result—just short of the rigorous standard traditionally required for a new-particle observation to officially count as a true discovery and not a fluke.

“It’s even better than I expected,” said Evans, of the University of Birmingham in the U.K. “I think we can say the Higgs is here. It exists.”

Evans attributed the stronger-than-expected results to “a mixture of the LHC doing a fantastic job” and “ATLAS and CMS doing a fantastic job of improving their analysis since December,” when the two teams announced a two-sigma observation of signs of a Higgs-like particle.

“So even with the same data, they can get more significance.”

“The LHC and experiments have been doing miracles. I think we are working beyond design,” the Italian particle physicist added.

ALICE’s Evans said he was extremely pleased by the Higgs results but admitted feeling just a bit disappointed that the results weren’t more surprising.

“Secretly I would have loved it to be something slightly different than the standard model predictions, because that would indicate that there’s something more out there.”

On God-Particle Hunt, It’s “Easy to Fool Yourself”

Wednesday’s announcement builds on results from last December, when the ATLAS and CMS teams said their data suggested that the Higgs boson has a mass of about 125 gigaelectron volts (GeV)—about 125 times the mass of a proton, a positively charged particle in an atom’s nucleus.

“For the first time there was a case where we expected to [rule out] the Higgs, and we weren’t able to do so,” said Tim Barklow, an experimental physicist with the ATLAS Experiment who’s based at Stanford University’s SLAC National Accelerator Laboratory.

A two-sigma finding translates to about a 95 percent chance that results are not due to a statistical fluke.

While that might seem impressive, it falls short of the stringent five-sigma level that high-energy physicists traditionally require for an official discovery. Five sigma means there’s a less than one in a million probability that a finding is due to chance.

“We make these rules and impose them on ourselves because, when you are exploring on the frontier, it is easy to fool yourself,” said Michael Peskin, a theoretical physicist also at SLAC.

Higgs Holds It All Together?

The Higgs boson is one of the final puzzle pieces required for a complete understanding of the standard model of physics—the so-far successful theory that explains how fundamental particles interact with the elementary forces of nature.

The so-called God particle was proposed in the 1960s by Peter Higgs to explain why some particles, such as quarks—building blocks of protons, among other things—and electrons have mass, while others, such as the light-carrying photon particle, do not.

Higgs’s idea was that the universe is bathed in an invisible field similar to a magnetic field. Every particle feels this field—now known as the Higgs field—but to varying degrees.

If a particle can move through this field with little or no interaction, there will be no drag, and that particle will have little or no mass. Alternatively, if a particle interacts significantly with the Higgs field, it will have a higher mass.

The idea of the Higgs field requires the acceptance of a related particle: the Higgs boson.

According to the standard model, if the Higgs field didn’t exist, the universe would be a very different place, said SLAC’s Peskin, who isn’t involved in the LHC experiments.

“It would be very difficult to form atoms,” Peskin said. “So our orderly world, where matter is made of atoms, and electrons form chemical bonds—we wouldn’t have that if we did not have the Higgs field.”

In other words: no galaxies, no stars, no planets, no life on Earth.

Buried beneath the French-Swiss border, the Large Hadron Collider is essentially a 17-mile-long (27-kilometer-long) oval tunnel. Inside, counter-rotating beams of protons are boosted to nearly the speed of light using an electric field before being magnetically steered into collisions.

Exotic fundamental particles—some of which likely haven’t existed since the early moments after the big bang—are created in the high-energy crashes. But the odd particles hang around for only fractions of a second before decaying into other particles.

Theory predicts that the Higgs boson’s existence is too fleeting to be recorded by LHC instruments, but physicists think they can confirm its creation if they can spot the particles it decays into. (Explore a Higgs boson interactive.)

Now that the Higgs boson—or something like it—has been confirmed to indeed have a mass of around 125 to 126 GeV, scientists have a better idea why the God particle has avoided detection for so long.

This mass is just high enough to be out of reach of earlier, lower-energy particle accelerators, such as the LHC’s predecessor, the Large Electron-Positron Collider, which could probe to only about 115 GeV.

At the same time 125 GeV is not so massive that it produces decay products so unusual that their detection would be clear proof of the Higgs’s existence.

In reality the Higgs appears to transform into relatively commonplace decay products such as quarks, which are produced by the millions at the LHC.

“It just so happens that nature is really nasty to us, and the range that we’ve narrowed [the Higgs] down to is the range that makes it most difficult to find,” ALICE’s Evans said.

Despite the challenges, ATLAS’s Gianotti said, it’s fortunate that the Higgs has the mass that it does.

“It’s very nice for the standard-model Higgs boson to be at that mass,” she said. “Because at that mass we can measure it at the LHC in a huge number of final states. So, thanks Nature.”

Going for the Gold

While the search for the Higgs was a primary motivation for the construction of the LHC, activity at the world’s largest atom smasher won’t stop if the Higgs boson is confirmed.

For one thing, the two teams will be busy preparing the data they presented today for submission to scientific journals for publication.

There are also lingering questions that will require years of follow-up work, such as what the God particle’s “decay channels” are—that is, what particles the Higgs transforms into as it sheds energy.

The answer to that question will allow physicists to determine whether the particle they have discovered is the one predicted from theory or something more exotic, Columbia University’s Tuts said.

“Does it really smell and taste like a Higgs? Is it being produced at the rate that a standard model Higgs would predict? That’s the work that’s going to go on over the course of this year at least,” he added.

Something the public often forgets, too, is that ATLAS and CMS make up only two of the LHC’s four major experiments, Evans said. The other two—the LHCb Collaboration and Evan’s own ALICE—are investigating other physics arcana, such as why the universe contains so little antimatter.

“If you want to compare it to the Olympics, finding the Higgs would be like winning just one gold medal,” Evans said.

“I’m sure most countries would like to win more than one gold medal. And I think CERN is going to deliver a lot more gold medals over the years.”

Professor Higgs: ‘I have no idea what the God particle is for’

Professor Peter Higgs admits he has “no idea” what the discovery of the Higgs boson will mean in practical terms.

The British physicist whose theories led to the discovery of the Higgs boson has admitted he has “no idea” what practical applications it could have.

He refused to be drawn on whether the discovery proved there was no God, stating the name ‘God particle’ was a joke by another academic who originally called it the ‘goddamn particle’ because it was so hard to find.

The 83-year-old was giving his first detailed press interview since the announcement of the discovery earlier this week of the Higgs boson at the Large Hadron Collider in Geneva.