Perhaps some Assange-bashers are envious. Despite his legal problems, he’s the host, director, and producer of a program that makes us care about his predicament—even if you’re not a full-fledged fan. We’re finally getting a chance to know this guy, through the questions he asks and the way he asks them 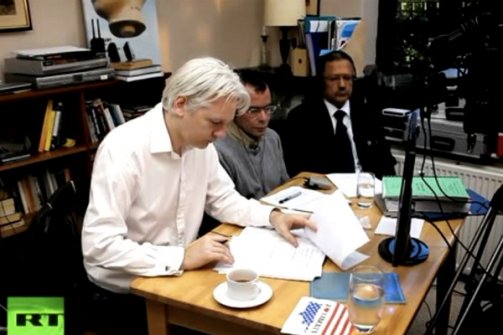 Julian Assange prepares to interview Hezbollah chief Hassan Nasrallah on the debut of his talk show, ‘The World Tomorrow’ (RT)

The 12th and final episode of The World Tomorrow, which is also called The Julian Assange Show, airs Tuesday on Russia Today, a controversial cable network with links to the Kremlin. The half-hour show is repeated throughout the day in four languages on Russia Today’s live stream, and you can catch up with previous episodes here. It’s addictive, lively, wide-ranging, and informative, suggesting a well-rounded (by computer-geek standards) host.

In an earlier episode, Assange was shown kibitzing homoerotically with the ex-husband of Jemima Khan, who contributed bail money to Assange in 2010. Fighting off a cold, he told Imran Khan, “my voice is a bit sexier than normal and I have to compete with you.”

Described as a frontrunner to be the next leader of Pakistan, Imran Khan is also a former cricket star. Their sly collegiality syncs nicely with something Rafael Correo, the president of Ecuador, told Assange in a previous episode: “Welcome to the club of the persecuted.”

A month later, while the show–entirely prerecorded–was airing, Assange sought asylum at the Ecuadorian embassy in London, where he remains. Viewers catching up with The Julian Assange Show may now experience a reality-TV buzz followed by a pang of anxiety. Correo’s a smooth-faced ball of ranting populist energy, exuding an all-too-familiar fanatical certainty, while Assange, sporting some questionable blond stubble, appears more laid back. What’s to become of Assange if he actually ends up not in Correa’s club, but in his country, on the run from rape charges? Yikes.

Fugitivism aside, a living-room atmosphere prevails on the show, whether guests are hanging with the host “under house arrest” or, like Khan and Correo, chatting via webcam. Good thing it’s so cozy in here. Out there? Not as much.

Assange has been subjected to no small amount of snark for airing the first season of The World Tomorrow on Russia Today (RT), a cable network regarded by many as the Kremlin’s tool. For getting into bed with Moscow in the springtime, he was called out as a useful idiot, part of a “long dishonorable tradition.”

So far, so disreputable, especially if you bought into Assange’s rock-star status. It’s easy to condemn political celebrities, and it’s quite a wake-up call when our antiauthoritarian heroes turn out to have survival skills.”We are always ready to blame another man for lack of heroism,” is how Graham Greene, a novelist known for his own Moscow attachments, once put it.

RT is, in fact, licensing the show, not producing it, and, with studios in Moscow and Washington, D.C., it’s a far more interesting network than some care to admit. If you watched RT’s lively coverage of the Supreme Court’s Obamacare decision, you were treated to the spectacle of Americans actually well-versed in the history of Canadian health care. (Where did they find these freaks? It might be a first, even for cable.) One of RT’s most popular vehicles is The Alyona Show, where girl-power aesthetic meets American liberalism—but libertarian Reason editor Brian Doherty is a frequent guest. (The newscasters in Moscow reporting on Putin’s state visits are more predictable, and where RT critics get their ammo.)

Clearly, I’ve become an addict. I like M.I.A.’s catchy soundtrack, and the rousing anthemic intro featuring the POTUS and Secretary of State condemning Assange for his outlaw ways. His fan base must be eating this up, but the show’s currency comes from what it can offer a skeptic in search of a good time. (That would be me, for I’ve never been entirely convinced that spilling secrets is such a noble endeavor.)

Perhaps some Assange-bashers are envious. Despite his legal problems, he’s the host, director, and producer of a program that makes us care about his predicament—even if you’re not a full-fledged fan. We’re finally getting a chance to know this guy, through the questions he asks and the way he asks them. (What comes to mind is the urgency of David Frost’s survival act as portrayed by Michael Sheen in the 2008 film Frost/Nixon.) By airing this 12-week series starting in mid-April, Assange made himself a lot more real to a lot more people during the build up to the U.K. high court’s extradition decision.

Assange debuted with Hezbollah leader Hassan Nasrallah, who hadn’t spoken to Western media in nearly six years. Just as one man’s freedom fighter is another man’s terrorist, so can one columnist’s idea of a “softball” question strike this one as, well, civilized. Yes, it’s fine for TV journalists to have social manners. The Guardian‘s Luke Harding, calling Assange a “fawning” interviewer, totally missed the point.

An interview that puts the Hezbollah chief at ease is far more revealing than the confrontation some might have preferred. The manner in which Assange handles Nasrallah assumes that the audience will decide whether his guest is lying, spinning, making a valid point, or chanting about God. If this three-way contract isn’t clear to Assange’s media critics, perhaps it’s just willful ignorance. Assange tends to go into his most diplomatic mode when religious belief is central to a guest’s political shtick—and he holds his audience to a higher standard than most. He actually thinks we’re emotionally literate. I call that refreshing, not fawning.

There’s another aspect of the “softball” interview to consider. Assange has been questioned by predatory journalists often enough, and he’s also been in prison. Having experienced tricky interrogators myself, including the police, I think Assange’s interview manner reflects that. If being treated like a criminal makes some journalists just a tad less self-righteous, maybe that’s OK. And what a pleasant surprise to find that Assange, a card-carrying whistleblower, can wear more than one hat.

While it’s fun to watch an aggressive interviewer like the late Mike Wallace (or even Bill O’Reilly), it’s more permanently edifying to watch an empath like Assange. That’s right—Assange turns out to be an empathic and talented listener, at least when he’s hosting a TV show. (Rumors about his overbearing conduct in the context of the Wikileaks organization may well be true: some of the most obnoxious activists I know are delightful on TV.)

Bitch if you must about Assange’s affable chat with Nasrallah: He’s even more good-natured when dealing with David Horowitz, a self-described Zionist who says cringe-inducing things about Arabs, Muslims—and something he calls “the international left.” Horowitz, editor in chief of the far-right organ, Frontpage.com, tries to heat things up by saying Barack Obama was “trained by communists.” Via satellite, he’s part of a showdown with superstar philosopher Slavoj Zizek, a psychoanalyst who was a dissident under real communism, in Tito’s Yugoslavia. Though it seems an unfair match, it’s enormously entertaining: Horowitz isn’t self-conscious, Zizek isn’t brutal, and Assange is light-hearted.

At one point, Horowitz picks up the telephone, and you realize: watching your opponent being henpecked on his own turf might be the sweetest revenge of all.

The show is not always fun or funny. A number of his guests have been tortured, imprisoned, spied upon, or interrogated under grotesque circumstances.

Tunisia’s new president, Moncef Marzouki, a former dissident and a physician, recalls what prison was like in the 1990s under the Ben Ali regime: “After just four months in solitary confinement … I was just talking to myself … I went crazy … it’s a kind of psychological torture.”

Episode 5, one of the most disturbing, introduces Moazzam Begg, an ex-Guantanamo detainee who survived physical torture during a three-year period of detention. Assange’s nonconfrontational approach reveals that, in many respects, this torture survivor has more in common, ideologically, with Horowitz than with Marzouki and other guests who were jailed and beaten during the 2011 Arab Spring. Begg is more into a mythologized golden age based on religious identity—an Islamic empire, really—and it’s depressing. The difference between Begg and Horowitz? Begg’s not raising his voice, and this makes him sound logical. What they have in common is that they’ve both been traumatized by political events. Maybe it’s not so funny, but David Horowitz has elected to play the clown. Moazzam Begg aspires to gravitas.

There are also moments—like in last week’s episode, featuring two eminences, Noam Chomksy and Tariq Ali—when a reasonable woman might wonder if the male left is having some kind of rebirth in Julian Assange’s virtual living room. There aren’t a lot of ladies present, certainly. In another episode, focusing on the Occupy movement, one participant announces that “clearly, the West is over.” Roll your eyes, it’s fine. Assange has set out to paint an accurate portrait of ideologies that matter in 2012, and this one probably does.

Happily, the heart of the series is in its brains. Finally we get to see Assange forgoing diplomacy and deference. If you watch nothing else, tune into “Cypherpunks,” an extended but sharply accessible ramble with three “virtuoso geek activists” from France, Germany, and the U.S. for whom nothing is sacred. Well, almost nothing.

Midconversation, Assange is held to account by Andy Muller-Maguhn, a surveillance watcher, which is to say, a geek who keeps track of those who are keeping tabs on the rest of us. Muller-Maguhn is also a longtime member of Germany’s Chaos Computer Club.

“You’re talking about soldiers using computers as military means,” he tells Assange. “This is not hacking,” Muller-Maguhn informs him. “This is not ‘hackers.’ “

It’s a deliciously provocative and heart-melting moment during which Assange  appears to be even a bit of a fogey in the face of Andy’s quixotic authenticity. Can they start working on the next 12 episodes of The Julian Assange Show from the Ecuadorian embassy?