At 29, Sheikha Mayassa Al Thani is the art world’s most powerful woman. 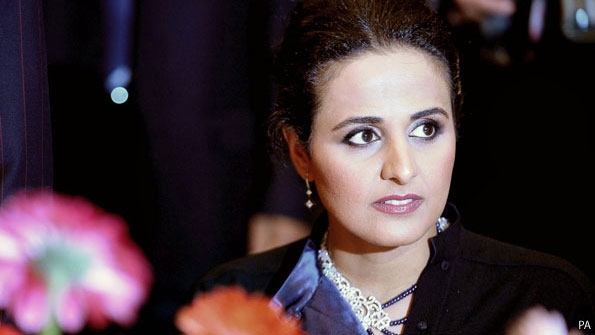 THE starkly beautiful Museum of Islamic Art (MIA) in Doha, Qatar, is a fine setting for a dinner. Last month 200 dealers, collectors and curators gathered there for the opening of the first showing in the Middle East of work by Takashi Murakami. The hostess of the evening sat laughing with the pony-tailed Japanese artist on her right. On her left was Dakis Joannou, a Greek-Cypriot industrialist and avid collector of the work of Jeff Koons, an American sculptor. Larry Gagosian, whom many regard as the most powerful art dealer in the world, was placed at a table nearby, with the other art dealers.

Few people could get away with asking Mr Gagosian to dinner halfway around the globe, only to sit him with the rest of the class. Sheikha Mayassa Al Thani is one. The emir of Qatar’s daughter has become one of the most talked-about figures of the international art world: collector, patron, cultural advocate. Mr Gagosian is not the only one who would like to catch her eye. 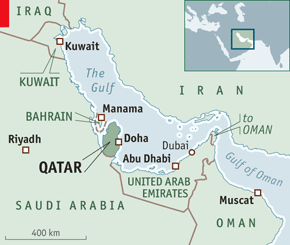 Until the 1980s Qatar was little more than a sandy backwater. Even its native pearl industry was on its last legs. The discovery of oil and, later, of the third-largest gas reserves in the world have made the pear-shaped peninsula unusually rich. In 2010 its tiny population had the third highest per capita GDP in the world and its economy grew by 16.6%, faster than any other. But even Qatar’s oil and gas will one day run out. Transforming the country from a hydrocarbon economy to a knowledge economy in time for the post-oil afterlife is the local mantra.

The emir’s blueprint, “Qatar National Vision 2030”, is leading to new schools and universities (in an area of the capital known as Education City), as well as a post-production centre to service the international film industry, and even a paperless hospital. New museums to showcase Qatar’s collections of Islamic art, modernist Arab painting, photography, armour and natural history are all part of the plan.

For the past 50 years the Qatari royal family has been avidly buying art. Well-advised, knowledgeable and said to possess an excellent eye, Sheikh Saud, a cousin of Sheikha Mayassa, sought the very best illuminated manuscripts, carpets, scientific instruments and Mughal jewellery that came on to the market. The extent of his acquisitions finally became clear when the Islamic museum opened in 2008. Designed by I.M. Pei, the MIA is now considered by many to be one of the half-dozen best museums in the world.

At the same time Sheikh Saud’s older brother, Sheikh Hassan, was buying 20th-century Arabic painting. Many of the artists were trained in Europe and the 6,000-piece collection at Mathaf, a modern-art museum in Education City, has a derivative feel. For a fledgling nation the paintings are important as an historical record.

Now the call to culture has fallen to a new generation. Sheikha Mayassa was a tomboyish, competitive child, the result, she says, of having two older brothers. Encouraged by her mother, a middle-class Qatari educated in a mixed school in Cairo (who is now a force for education reform), she learned French, English and her native Arabic, and went on to study political science and literature at Duke University in North Carolina.

Two years ago she and her husband, who had both been doing postgraduate work at Columbia University, returned home. Sheikha Mayassa’s job, as the head of the Qatar Museums Authority (QMA), was to turn Qatar into a cultural powerhouse—a wellspring for exploring what art is and what it means for human beings to create it. “Above all, we want the QMA to be a ‘cultural instigator’, a catalyst of arts projects worldwide,” a trustee says.

Sheikha Mayassa works in a spacious office on the top floor of the MIA. Its walls are lined in pale beech wood, and behind her long desk stretches an array of framed family photographs. Dressed in a black abaya, her hair covered, she wears hardly any jewellery other than a childlike bracelet made of coloured thread with a single gold charm, a tiny Arabic coffeepot or dallah. It retails for $82 in the museum shop.

The QMA is a government body, but it remains wholly a family affair. In her first major interview, Sheikha Mayassa explains: “The QMA is very much my father’s baby. He wanted to create something…to connect with the community, to create a culture dialogue within society. We report directly to him. The nice thing about my father is that he doesn’t interfere in the day-to-day business. We present the strategy, and once he agrees with the strategy and the vision we are given the authority and freedom to go ahead and execute them in the way we think fit.”

The QMA is not part of the Culture Ministry, though they do co-operate. The museum agency works with local franchises of foreign universities, such as University College London, on arts administration and museum management. It recruits heavily from abroad, especially at a senior level. The director of the public-arts programme is a Dutchman, Jean-Paul Engelen, who came from Christie’s. Edward Dolman, Christie’s one-time British chief executive, runs Sheikha Mayassa’s office. The director of the MIA is 32-year-old Aisha Al Khater, the first Qatari woman to gain a degree in music. But the four specialist curators below her are all foreign. Two more are about to join them, an expert on manuscripts and another on coins.

The QMA budget is not made public. Decisions on funding and acquisitions are taken by a small group at the top of the organisation. Although she did not say so in her interview, Sheikha Mayassa insists these remain secret for fear their ideas might be stolen by such states as Sharjah or Saudi Arabia. For those outside this inner circle decisions can seem arbitrary and confusing. Two MIA directors left after a relatively short time and earlier this month Wassan al-Khudairi announced that, after just a year as the head of Mathaf, she too was returning to academic life. 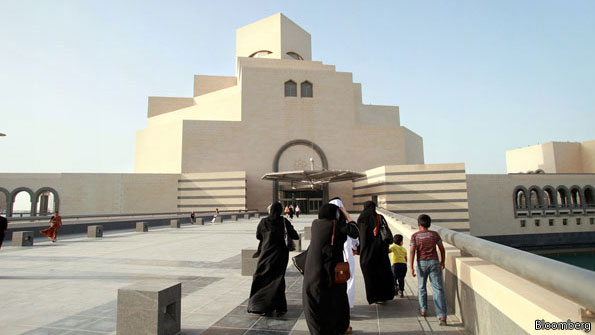 Attracting local audiences is a priority, the Sheikha says. The MIA, with its grand, forbidding approach (pictured), is not welcoming to the tens of thousands of migrant workers who flock to Qatar from Pakistan and other parts of South Asia. To help counter that, the QMA aims to open up its museums more to schoolchildren. It also wants to encourage local artists and to commission sculpture and photography by both Qatari and international artists for the new airport that opens in December and the vast new Sidra medical centre that will be finished probably next year.

In addition to the Islamic and modern Arabic art museums, which now fall under the QMA, a new interactive museum of sport and the Olympics is slowly taking shape to coincide with Qatar’s hosting of the FIFA World Cup in 2022. The biggest project, though, is the construction of a national museum for Qatar, which will open in 2016. Its French architect, Jean Nouvel, has used the local desert rose as a motif for the exterior walls. Twelve interior galleries will tell the 300,000 Qataris their national story, from prehistoric times through to the development of their pearl industry and the discovery of oil and gas, exploring local traditions about the desert, food, fishing, falconry and folklore.

The QMA is very good at borrowing from other museums. The MIA version of the “Gifts of the Sultan” show that started last year in Los Angeles includes objects from Russia’s Hermitage museum that the American exhibition did not have. A Qatari version of the British Museum’s new “Haj” show will very likely have objects from the Topkapi Palace museum that were blocked by the Turkish authorities. In response to a British block on taking home two major art works that the QMA bought at auction in London, the Qataris have skilfully negotiated long-term loan agreements with two British museums that will also provide help in training Qatari staff.

Whereas nearby Abu Dhabi is franchising outlets of the Louvre and the Guggenheim, Qatar is growing its own museums. Sheikha Mayassa’s use of its Islamic and Orientalist collections to explain the region’s history makes sense. Less clear is why she has been buying Western art. Over the past seven years the Al Thani family is estimated to have spent at least $1 billion on Western painting, sculpture and installations, including the last privately held version of Paul Cezanne’s “The Card Players” for over $250m—a record price for a work of art. That acquisition, which took place in early 2011 but was reported only last month, is just the latest in a series of purchases that includes some of the very best works made by Francis Bacon, Mark Rothko, Andy Warhol and Damien Hirst, a number of them bought for record prices. Speculation about the Al Thanis’ art buying has been fuelled by the family’s blank refusal to confirm or deny any of the rumours and its reluctance to clarify whether its acquisitions are private or on behalf of the state—or even to explain how they might benefit Qatar’s citizens.

Sheikha Mayassa is keen to bring some big names to Doha. A Murakami show at the Palace of Versailles in 2010 led to the Japanese artist’s Doha retrospective. Mr Hirst’s show at Tate Modern in London, which opens on April 4th and which is costing the QMA more than £2m to sponsor, will give rise next year to a Hirst show in Qatar, another first for the region.

In order for the QMA to be more than a rich girl’s plaything, Sheikha Mayassa will have to do better than put expensive foreign baubles on display in her homeland. She needs to be far more innovative and focused in choosing between the hundreds of exhibitions the QMA gets offered. Last year’s showing at the MIA of German Baroque from Dresden made no sense. Cai Guo-Qiang’s evocative exploration, now at Mathaf, of the ancient links between China and the Gulf is new and original.

An absolute monarchy like Qatar is a hard place in which to encourage the daring, irreverence and subversiveness that is the hallmark of a truly artistic nature. Not everyone in Qatar is persuaded of art’s importance. The local blogosphere is full of suggestions that the country would do better with a Formula One racetrack or another football stadium. And the recent sudden announcement that Qatar University would switch to teaching in Arabic instead of English is a sign that conservative nationalists have real power here. In her introduction to the Tate’s Hirst catalogue, Sheikha Mayassa writes that “Art—even controversial art—can unlock communication between diverse nations, peoples and histories.” The years ahead will test her resolve—Qatar’s too.