Putin and United Russia Get Less Than 50 Percent Of Vote 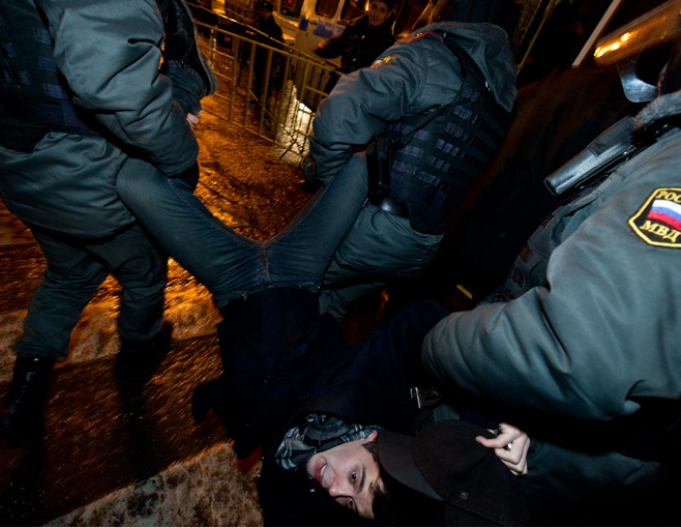 MOSCOW–On the day of the State Duma elections, the chief editor of the online publication gazeta.ru Mikhail Katov was summoned to the headquarters of Russia’s state media watchdog Roskomnadzor.

The day before, he had received notification that his site violated media regulations in its coverage of the Duma elections. “It turned out that the reason for the summons were two letters, one signed by the head of the Central Executive Committee, Vladimir Churov, and another by the deputy attorney general, Alexander Buksman,” Katov said.

The main claim was that gazeta.ru was publishing information about violations the United Russia party allegedly committed during the pre-election period. “The committee did not recognise these violations, and therefore they considered the publication of this information as ‘illegal agitation,’” Katov said.

“Surprisingly, no concrete examples of our violations were presented; they simply told us that we were behaving badly,” the editor added. “They wanted us to talk about United Russia as one would about the dead, to say only good things. In that way, the media was pressured.”

But Katov stressed that despite the warnings he received: “Gazeta.ru will stick to its editorial policy.”

Roskomnadzor has refused to comment. Meanwhile, Prime Minister Vladimir Putin and President Dmitry Medvedev’s United Russia party held on to parliamentary power in the Duma elections, though its popularity has slipped considerably.

Shortly after the voting ended, the website of the radio station Echo Moscow crashed. Editor-in-chief Alexei Venedictov said the site was victim of a DOS attack and was offline from 6.40 a.m. The station has already appealed to the Central Executive Committee, and Venedictov will make a complaint to the Prosecutor General.

The chairman of Echo Moscow’s board of directors, Nikolai Senkevich, said: “I think that any hacker attack on any resource that leads to financial losses is tantamount to theft.”

The websites Live Journal, slon.ru, as well as the sites of the newspaper “Big City” and the New Times also stopped working. The day before the elections, the website of Kommersant was subject to a hacker attack, resulting in a 35% drop in visitors.

The head of Kommersant’s legal division, Georgi Ivanov, said the paper would file a complaint, but is not holding its breath over any investigation. “Whenever there is a hacker attack, we always make a complaint, but it is simply an expression of our position, a symbolic gesture. None of our complaints have ever led to anything,” he said. “Honestly, I don’t think I have heard of any case of DOS attacks being successfully investigated.”

Also affected was the website of the country’s only independent election observer, Golos, which was targeted over several days and even accused of treason for accepting western financial grants. The watchdog’s director, Lilia Shibanova, was detained at a Moscow airport for 12 hours and her laptop seized while a court fined Golos $1,000 for violating a law that prohibits publication of election opinion research five days before a vote.

Back in April, Russian President Dmitry Medvedev discussed hacker attacks with the editors from the mass media and pledged to find experts that could investigate them. But Novaya Gazyeta editor-in-chief Dmitry Muratov doubted this would happen as this would effectively mean that “the group that carries out attack, will investigate them.”