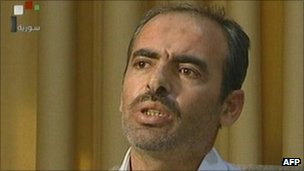 A top Syrian officer who defected from the army and fled to Turkey has turned up in Damascus, retracting key claims about the uprising in a TV interview.

In the interview he retracted comments that the army had been ordered to fire at opponents of the government.

Syrian media said Col Harmoush was detained in Syria but activists have accused Turkey of handing him over.

The Turkish foreign ministry denied the allegation, saying such a move was out of the question.

Syria has been racked by more than five months of protests against the rule of President Bashar al-Assad, with the UN reporting more than 2,200 deaths.

There have been reports of fresh clashes in a number of towns and cities on Friday, which has become the traditional day of protest.

Col Harmoush appeared on Syrian TV on Thursday, confirming his defection but denying that the Syrian government had ordered its army to fire on civilians. He also accused Syrian opposition activists in Turkey of “empty promises”.

Col Hussein Harmoush was the most senior army officer to defect from Syria. While a refugee in Turkey, he said he would lead a Free Officers’ Movement against the government in Damascus.

Because he was so outspoken in his denunciations of the Syrian regime, activists who remain in the camps say they cannot believe he would have gone back voluntarily.

One told the BBC he was last seen when he was allowed to leave the camp on a shopping trip.

They believe he was either kidnapped by Syrian intelligence agents or sent back by the Turkish security forces.

But Turkish officials point out that of a total of over 18,000 Syrians who fled over the border, most have now chosen to go home.

Camp residents say the returnees are going back for economic reasons.

We may never know why Col Harmoush went home. Turkish officials believe he may have been coerced, through threats to his family. His own accounts of how and why he defected are inconsistent. In the end, even the life story of this high-profile witness has proved impossible to verify.

He said: “During my service in the Syrian army, nobody has ordered me to fire at the civilians or any others. I didn’t see or hear any commander in the army that had given orders to shoot at civilians.”

He said activists in Turkey had pledged to help him arm Syrian civilians, but added: “They were all promises… they promised to supply me with weapons and money for liberation, but they were just promises.”

But Col Harmoush said groups such as the Muslim Brotherhood told him they had smuggled weapons into Syrian areas such as Homs, Hama, Idlib and Latakia.

Referring to the deaths in Syrian towns, he said: “I am sure that armed groups were the killers.”

The government has regularly referred to “armed groups” as being responsible for the violence.

Col Harmoush did not refer directly to his return to Syria, saying only: “I have been thinking about coming back since the 15th day of Ramadan [15 August], but I was shocked to be used as a trade and how people begged money in my name and offered many promises none of which was achieved.”

Originally it was reported he had defected from the army with 30 others after it began shelling the town of Jisr al-Shughour in June.

A video was posted on YouTube showing him holding up his military ID card and saying: “I declare my split from the army.”

But he later told the BBC he had not been at Jisr al-Shughour at the time of the killings, had defected four days later and did so alone.

Col Harmoush became part of the Free Officers Movement, calling on the Syrian army to back the people, not the Assad government. 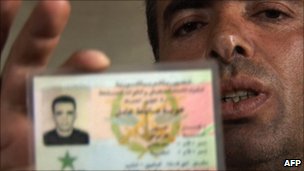 But after what Syria’s al-Watan newspaper said was an undated “special operation” in its Idlib province, Col Harmoush was detained.

The BBC’s Jonathan Head, in Istanbul, says Syrian activists in refugee camps are blaming the Turkish authorities for handing him over, arguing that he would not have returned to Syria of his own accord.

They say the last time they saw him was when he went to a meeting with Turkish intelligence officials.

The UK’s Guardian newspaper quoted Wissam Tarif, from the rights organisation Avaaz, as saying Turkey had traded Col Harmoush for nine members of the outlawed PKK Kurdish militant group, but this cannot be confirmed.

The Turkish foreign ministry said that no Syrian refugees had ever been sent back against their will.

Our correspondent says Turkish officials believe Col Harmoush may have been persuaded or coerced to go back by infiltrators from Syrian intelligence inside the Turkish camps.

Activists said shooting was heard outside a mosque in Deir el-Zour in the east and that large numbers of protesters had turned out in the north-eastern towns of Qamishli, Amouda and Derbasiyeh.

Separately, the Lebanese army said Syria had fired into Lebanese territory during a brief incursion on Thursday.

The Lebanese statement said a Syrian patrol had crossed 200m into Lebanon, firing several shots at fleeing refugees before retreating back over the border.