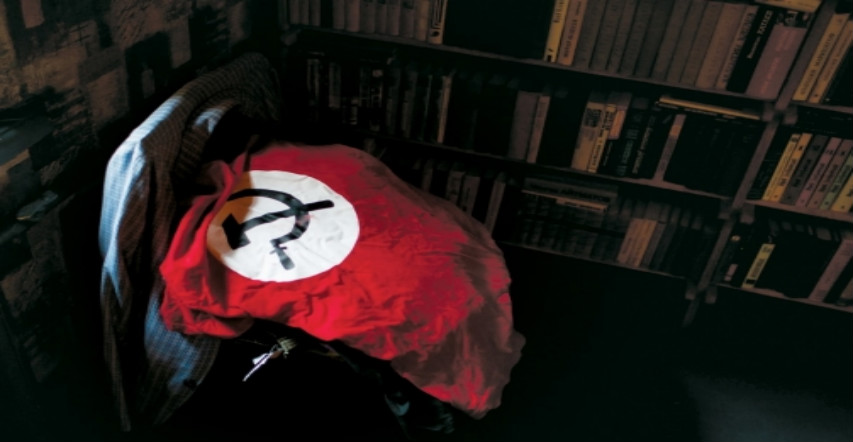 A literary festival in St-Malo, France, Russian writer Zahar Prilepin and I spoke on a panel about Russia’s war in Chechnya. The audience was fired up with anti-Russian sentiment, having just seen a documentary on the devastation of Grozny by Russian forces in 2000. Prilepin—muscular, silent—sank sullenly in his chair as the experts waffled on about Russia’s unhealed psychological wounds. Finally, I suggested we give Prilepin the microphone, since he was the only one in the room who’d fought in Chechnya, as an officer in Russia’s paramilitary police. He weighed his words. “All I can say is that the Russian soldier has a natural talent for fighting,” he declared. “And he’s ready to demonstrate that skill in any European country you like.” Cue howls of Gallic indignation.

Yes, Zahar Prilepin is an unapologetic nationalist. He’s also a leading critic of the Kremlin who has been arrested more than 30 times. And he’s probably the most important writer in modern Russia, a sensitive and intelligent critic of his country’s condition.

To understand Russia today, you need to understand Prilepin—first and foremost because he doesn’t fit into the preconceptions most outsiders have about the place. He hates Prime Minister Vladimir Putin and the “thieves” in the Kremlin. But unlike the liberal opposition, Prilepin cheered when Russian tanks rolled into the breakaway republics of Ossetia and Abkhazia in 2008. He served in Chechnya but was an admirer and colleague of Anna Politkovskaya, the investigative journalist who criticized abuses by Prilepin’s own brutal unit, the OMON (and who was slain in 2006). Much of his writing is dark and violent, yet it shines with a Tolstoy-like faith in the Russian people. “In Russia everything has been destroyed except the people, with all their reserves of strength, love, and patience,” he says. The Russian people have reciprocated: every Prilepin book is a bestseller, especially among young, urban readers, and he recently won a major literary award for best new writer of the last decade.

The paradoxes are endless. It’s only when you see Prilepin and his work in the context of his generation that the picture starts to make sense. Born in 1975, he grew up in a provincial intelligentsia family during the stifling days of Brezhnev stagnation. But as he came of age, his country fell apart and the certainties of Soviet life disintegrated into a kaleidoscope of ideologies. Small wonder, then, that Prilepin’s world view seems patched together from so many apparently contradictory sources—a bit of Tolstoyan mysticism, some German nationalism, a dash of Jeffersonian democracy.

Prilepin is most incisive when he draws portraits of youths a few years younger than himself—Russia’s lost generation, who grew up in a dystopic world where bandits were kings and the politicians were corrupt thieves. In his 2005 novel Pathologies, Prilepin writes of young men at war in Chechnya, and the intense camaraderie and casual brutality of kids with no role models and precious little family except each other. In San’ka, his second work, Prilepin spins the tale of a young boy whose father has drunk himself to death—a metaphor for the wider “fatherless generation searching for those whose sons they can become.” San’ka finds such a father figure in the charismatic leader of an ultranationalist group, based on the real-life National Bolshevik Party, a radical opposition group banned by the Kremlin. San’ka and his friends are rebels, but hopeless and ineffective ones, who end up beating themselves to pieces on the walls of the cage that the state has built around them.

Where San’ka is just a doomed rebel, Prilepin is a literary revolutionary, that peculiarly Russian figure who believes that his words and ideas can transform his country. It’s no coincidence, Prilepin thinks, that all the great Russian writers of the last 150 years have been intensely political. The old cursed questions of Russia—What is to be done? Who is to blame?—are as important today as ever. Such questions don’t allow Russian writers to stray far from politics, “not even Nabokov, running around with his butterfly net.” One can’t write about Russians without writing about their relations with the state.

Prilepin is a political writer in the way that Maxim Gorky or Fyodor Dostoevsky were political: he shows vulnerable, all-too-human characters fighting giant forces more powerful than themselves. And like Dostoevsky’s, his work is shot through with irrepressible beauty and the promise of redemption: a wannabe-terrorist punk called Negative who talks tenderly to his plants; a soldier who daydreams about his simple love for his girlfriend, even as he terrorizes Chechen civilians.

Prilepin’s two tours of duty in Chechnya were the basis of Pathologies. Today he ducks questions about how much of the brutality he describes is actually true. “I write fiction, not autobiography,” he says curtly—though he does volunteer that his driver was shot just yards from him in an ambush. He’s also not ashamed to admit that he made money the way most Russian police do, shaking down truckdrivers for bribes. Prilepin is an intensely male writer—like Ernest Hemingway, he’s intoxicated with the rituals and bonds of maleness, and, by extension, war, which he sees as the ultimate test of manhood. “Men are designed to deal with war like women are designed to overcome childbirth,” he says.

It’s clear that Prilepin is a patriot, albeit one who sees his country as fatally sick, and who feels a duty to do something about it. That’s why he edits Nizhny Novgorod’s edition of the liberal paper Novaya Gazeta—which employed Politkovskaya—and why he heads the local branch of the banned National Bolshevik Party. To an extent, he’s protected by his fame, and perhaps by a family connection—his cousin-in-law is the Kremlin’s chief ideologue. But Prilepin hasn’t totally escaped the ire of the authorities. He’s had his phone routinely tapped, he’s been arrested dozens of times, and he faces three criminal cases brought by officials accused of corruption by his paper.

In the end, what makes Prilepin such an important figure is that he’s been into the heart of Russia’s darkness and seen some kind of light. Despite his dystopic portraits of the lost generation, he says that in real life he’s met plenty of Russian kids who are “smart, curious, intelligent, kids who want to travel and learn languages.” And unlike his nihilistic characters, Prilepin actually gives a damn—which is another way of saying he still has hope. “The apocalypse starts within each of us,” he says, echoing Aleksandr Solzhenitsyn’s call to reject the passivity and conformism that allows the state to trample its people.

One evening in June, Prilepin and I sipped cognac on the porch of a bathhouse by the vast, slow-flowing expanse of the Volga. Sitting and watching rivers slide by is one of the recurring images in his books: in one story, a boy tells his father he wants to wait and see when the river will run dry. “Russia lives on a precipice into which it can collapse at any moment,” Prilepin says. “Russia has two paths—to change or to die.” As the dusk gathers, he seems strangely serene as he speaks about the coming revolution. “People used to believe that the state was all-powerful,” he says. “But not anymore … Anyone who thinks and reads wants change.” For Russia’s sake, one hopes that it won’t be San’ka’s kind of revolution, a bloody affair of lynchings, broken glass, and fire.