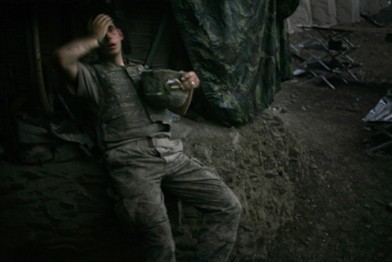 I found out that photojournalist Tim Hetherington had been killed in Libya when a friend who works for a press office called to let me know. It took ten minutes for me to figure out my feelings. I went from incredulous to disbelieving to emotional to upset. Then it was confirmed on the news. Of course then there was the undeniable proof of his body lying there immobile, found God knows where. But it’s in that shot that I find the smile and the gaze of my friend Tim.

We met in the spring of 2008 during the Pirelli regatta. He was the winner of the World Press Photo and I was accompanying him in that glamorous world, which was actually quite welcoming and generous. He told me of his projects and his dreams. His goal was to take his experience as a narrator (he studied literature at Oxford) and translate it into images. I told him that he’d already done that with that photo, actually a series of photos, that showed the physical and mental exhaustion of soldiers in the trenches. 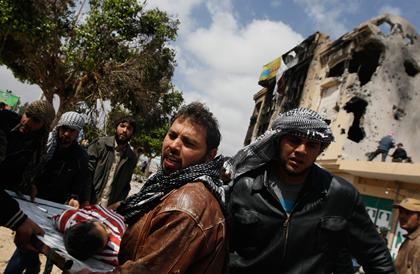 Three colleagues were also injured, including Chris Hondros, a photographer for Getty Images, and 2005 winner of the Robert Capa Gold Medal for “best published photographic reporting from abroad requiring exceptional courage and enterprise.”

In his last tweet from embattled Eastern Libya Tuesday, Hetherington, a contributing photographer for Vanity Fair magazine, writes: “In besieged Libyan city of Misrata. Indiscriminate shelling by Qaddafi forces. No sign of NATO.”

The Washington Post reports that Post reporter Leila Fadel was at the hospital in Misrata working on a separate story when Hetherington and Hondros were brought in. She said Hondros had apparently been hit by shrapnel and had suffered a “severe head injury.”

USA TODAY collaborated with Hondros three years ago about his experiences riding in a Humvee in Iraq. View it here.

Update at 2:18 p.m. ET: The Associated Press quotes a doctor in Misrata as reporting that a Western photographer has been killed and another seriously wounded. It is also withholding their names.

Several news sites and Twitter postings, including The Times have identified the photographers, but because much of the information is conflicting we are withholding the names for the moment.

The Times quotes an unidentified colleagues at a triage center in Misrata as saying the wounds to two of the photographers are “grave” and that one of them is “clinging to life.”

The Times says early reports indicated the photographers were working together near the front lines when they were hit by a rocket-propelled grenade.

Hetherington, a contributing photographer for Vanity Fair magazine, was co-director, with Sebastian Junger, of the documentary about a platoon of Soldiers in Afghanistan. Restreopo won a Grand Jury Prize at the 2010 Sundance Film Festival.

Diary (2010) from Tim Hetherington on Vimeo.