What happened at that early hole at Augusta wasn’t triumph at all but a bittersweet false spring, a flickering reminder of what he was but will never be again. 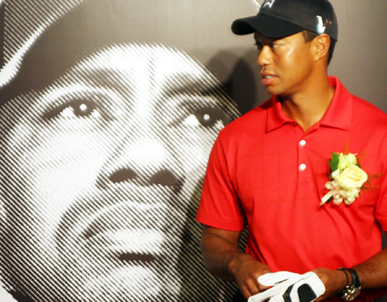 Forget the brief, exhilarating moment at the Masters when Tiger Woods looked invincible again. That machine of golf greatness, who fell apart after blowing up his marriage, is gone for good, says Buzz Bissinger.

I forget which hole it was—the eighth, I think—but the specifics were irrelevant. It was the moment that mattered, the silent roll of the ball into the cup like a held breath followed by the exhale of the crowd roar, the pumped fist of the man in the black pants and the red shirt who personified invincibility. It was the Tiger March, the triumphant joy of an athlete, once so routine, who died young. As I watched the final round of the Masters on Sunday, I felt something I never thought I would feel given my withering criticism of him for duping so many millions of us with an image that only existed to make money:

Not so long ago, Tiger Woods would have won the Masters after shooting a remarkable 31 on the front nine in the final round at Augusta, particularly as the leader after three rounds, Rory McIlroy, flapped and flailed into disintegration. No athlete in history has been like Tiger Woods, the ability to make a surge to the front and hold it and intimidate the competition into gawking onlookers of wonderment. Nothing in sports was worse for an opponent than Tiger on your tail. They knew they were going to fall apart, for the very reason that Tiger never fell apart.

But the moment on Sunday did not last, and there was an inevitability to that. Since he crashed his car on Nov. 27, 2009, outside his home in Orlando, and the subsequent revelations that he had been on the bimbo tour with even more intensity than the PGA golf tour, he has never been the same.

The march of Tiger now routinely fizzles out, and what happened at that early hole at Augusta wasn’t triumph at all but a bittersweet false spring, a flickering reminder of what he was but will never be again. The confident swagger up the fairway, the snickering asides to his caddy as challenger after challenger fell like tin cans in the wind, the belief, so often right, that he could not and would not lose, is gone. Just as so many millions of us witnessed his remarkable ascent, so many of us are witnessing his equally remarkable destruction.

A man’s private life is his private life no matter how copious the use of his putter outside the greens of a golf course. The ratio of professional athletes who had extramarital affairs to those who don’t is somewhere around a billion to one. But in Woods’ instance private life did matter, because it was all of a piece with a grand deception. In an era of the athlete-as-scoundrel, Woods maintained an image of someone always above the fray—steady, noncontroversial, a good husband, a good father, a good person. He made hundreds of millions of dollars off that image, which as we all know turned out to be a lie, with so many women ultimately coming out to tell their tawdry tale of Tigermania you needed an advanced degree in applied science to figure out just how many times he did what to whom when.

In the immediate aftermath he seemed frantic to stay married, but as I wrote in the February 2010 issue of Vanity Fair, “Going forward, it is impossible to trust the motives of Woods on anything, whether he wants to be married for real or to reclaim an image so bloodied that his endorsement career is almost certainly over… He deluded himself into thinking he could be something he wasn’t: untouchable.”

Since returning to the PGA Tour a year ago, his play has been a disaster. He has not won a tournament and has played the worst golf of his life. At the Quail Hollow Tournament, he missed the cut, shooting a second round seven-over 79. He finished in 23rd place at the British Open. At the WGC-Bridgestone Invitational, he posted his worst four-round score as a professional golfer at 18-over par. In last week’s Masters, he was atop the leader board twice in the final round. But on the back nine he putted so terribly it was painful, and 26-year-old upstart Charl Schwartzel blew by him with the kind of finish that once would have been Tiger’s, four consecutive birdies on the final four holes. Tiger ended up fourth, and that was enough for hyperventilated journalists such as Mike Freeman of CBS.com to write, in a fine parody of hyperventilation, “after a courageous, almost history-making performance, it’s impossible not to declare the career of Woods reinvigorated from the waitress-chasing dead.”

It’s poppycock junk and even Freeman knows it is poppycock junk. Tiger’s five-under par 31 on the front nine was followed by an even-par 36 on the back nine, hardly the stuff of courageousness or reinvigoration but the stuff of woeful inconsistency, a man at odds with himself.

I don’t think Tiger particularly cares about the loss of his image: He may be relieved to no longer have it, and he made so much in endorsements when he did have it that money will never be an object. Despite initial attempts to stay with his wife, Elin Nordegren, I don’t think he particularly cares about that either, perfect Swedish eye candy for the stereotypic camera pan at the end of a tournament but hardly a match in the bedroom for the slut patrol.

What I am convinced he does care about is the loss of his two young children from his life on a permanent basis. Whatever he did, fatherhood was precious to him. Anybody who knew him on the Tour will tell you that. But because of the numerous affairs he had, it was his ex-wife who was granted sole custody.

While writers are as good at psychoanalysis as Lucy was with Charlie Brown, I believe that Tiger mourns the separation from his children every waking moment of his life. To think that it doesn’t affect his golf game is ludicrous. Athletes are affected by emotional upheaval. For all their privilege and entitlement and money, they do sometimes have no choice but to act like human beings.

When I watch Tiger during a tournament now, there is something painfully lonely about him, the isolation of a man just wandering, lost in brooding. No athlete has fallen further, and it is hard to know what sustains him now, except a golf game that, like his life, bears no resemblance to what it once was.

He is human now, not some machine of golf greatness. Which is why, after not particularly caring for him even before the scandal, I now find myself fervently rooting for him.

So just go out and win the thing, Tiger.

So at we can see you smile at least one more time before the reality of what you did, and what you forever lost, returns with its vengeance.

Buzz Bissinger, a sports columnist for The Daily Beast, is a Pulitzer Prize-winning journalist and the author of Friday Night Lights and Three Nights in August. He is a contributing editor at Vanity Fair.