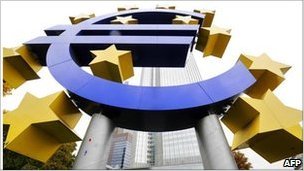 Eurozone interest rates have been raised to 1.25% from the record low of 1% by the European Central Bank (ECB).

Interest rates had been held at 1% for just under two years following the financial crisis and global recession.

ECB president Jean-Claude Trichet said that the rate rise was in response to the risk of accelerating inflation, and added that rates were still very low.

He called the decision a “balancing act”, amid concern the move worsens debt problems for Portugal and others.

“The hike is unwelcome for peripheral countries, but arguably the core member states were in need of this move already some time ago,” said Mr Trichet in a nod to the differing economic fortunes of the eurozone members.

“In that sense, the timing of the increase is a balancing act, which is part and parcel of the one-size-fits-all monetary policy.”

Germany has enjoyed a strong rebound in growth, led by an export boom.

The basic laws of economics are threatening to pull the eurozone apart, just as politicians are trying to pull it together. As usual, the ECB is stuck in the middle of the mess, and it doesn’t like it one bit. ”

In contrast, the economies of Greece, the Republic of Ireland, Portugal and arguably Spain remain trapped by large debts, high unemployment, weak consumer spending and uncompetitiveness.

Mr Trichet confirmed that the ECB had “encouraged the Portuguese authorities to ask for support” when questioned about its role in Portugal’s decision to request a bail-out.

On Wednesday, Portugal’s prime minister said he would ask for financial assistance from the European Union.

The ECB is the first of the world’s major central banks to start raising rates after the global recession and is an indication that it is now more concerned about inflation than slow growth, the BBC’s chief economics corrrespondent Hugh Pym said.

The governor remained cryptic about the likelihood of further rate rises.

“We did not decide today that it was the first in a series of interest rate increases,” said Mr Trichet in response to a question at a press conference after the meeting.

However, in his prepared speech to the press, the ECB president said the monetary policy stance remained “very accommodative” and that the risk of inflation remained “on the upside”.

Widely expected it may have been, but the European Central Bank’s interest rate move will take some sort of place in the history books.

The ECB has become the first of the world’s leading four central banks to start raising rates in the aftermath of the financial crisis and the onset of economic recovery.

It’s hard to see counterparts in Japan or the US following suit in a hurry.

The Bank of England may take a similar path, but when is anyone’s guess. The Bank held rates at the historic low of 0.5% yet again.

Higher borrowing costs will do nothing to help Portugal, Ireland and Greece grow their way out of trouble.

But the ECB argues its job is to control inflation across the whole Eurozone.

Yet despite these statements, currency traders concluded that Mr Trichet’s comments slightly lowered the chances of further rate increases.

The euro’s exchange rate was volatile during the speech as investors tried to make sense of his comments, before moving decisively lower against the dollar.

The increase in eurozone interest rates had been widely expected by markets and had been expected to mark the start of a series of rate rises by the ECB.

The European Commission recently upgraded its inflation forecast for the eurozone to 2.2%, above the ECB target.

The bank also raised another reference rate – the marginal lending rate – to 2% and its overnight deposit rate to 0.5%.

Analysts said the ECB was concerned about the impact of rising oil and commodity prices on inflation.

“Inflation is above their objective and they’re worried that it will remain above their target level for quite a long time,” said Ken Wattret, European economist at BNP Paribas.

There is uncertainty, however, about how far rates will rise.

Further rises could risk damaging growth in the eurozone’s weaker economies such as the Irish Republic and Portugal.

“I think it is the start of a series but I think [ECB President] Trichet… will try to temper any market expectations, which are already priced in, of further hikes to come,” said Lloyds’ interest rate strategist, Eric Wand.

The interest rate rise was also anticipated by banks who have raised lending rates to each other since the start of the year.