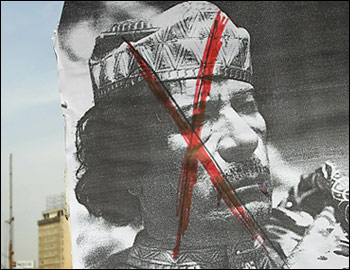 FRANCE 24 takes a look at who’s who in Muammar Gaddafi’s family.He has eight biological and two adopted children giving him eight sons in all.His adopted daughter Hannah was killed in the US bombing of the Gaddafi compound in 1986.

Muhammad Gaddafi: Muammar’s oldest son, Muhammad is the head of Libya’s Olympic committee and the General Post and Telecom Company, which owns and operates cell phone and satellite communications across the country.

Saïf al-Islam Gaddafi: Muammar’s second son, the 38-year-old is seen as the poster child  for a more modern and moderate Libya. He left the country in 2006 after speaking out against his father’s regime, but came back to Libya, despite insisting that he was not seeking to succeed his father. Saïf has a Western education with a doctorate from the London School of Economics. On February 20, Saïf appeared on TV to address the issue growing unrest in Libya. He promised reforms, but also blamed tribal divisions and Islamists for the uprising and warned of the civil war that could result.

Hannibal Gaddafi: He used to work in the oil industry, but lately Hannibal has had legal troubles. In 2005, he was accused of beating a pregnant girlfriend in Paris and three years later he was arrested for assaulting two of his servants in Geneva. Since the incident, Libya has boycotted Swiss products, banished Swiss companies, and pulled its diplomats out of Bern.

Khamis Gaddafi: A police officer, Khamis is rumoured to have led the crackdown on recent protests in Benghazi.

Mutassim Gaddafi: Muammar’s fourth son is currently National Security Advisor and commander of his own unit in the Libyan army. Mutassim spent years in Egypt after allegedly plotting to oust his father, but he was ultimately allowed to return to Libya and assume official duties.

Saïf al-Arab Gaddafi: There is little information available about Saïf al-Arab, aside from a 2008 Daily Telegraph article reporting that his car had been confiscated by German police because of noisy exhaust. He was thought to be a student in Munich at the time of the incident.

Milad Abuztaia Gaddafi: Muammar’s adopted son and nephew is credited with saving his life during the US bombing of the Gaddafi compound in 1986 when Gaddafi lost his 15-month-old daughter Hannah.

Saadi Gaddafi: A former football player himself, Saadi now heads the Libyan Football Federation and dabbles in the film industry as a producer. He is also involved in a number of other business ventures. He is married to the daughter of a military commander.