A Palestinian protester sets ablaze a U.S. flag in the West Bank city of Ramallah, in support of the anti-Mubarak protests in Egypt 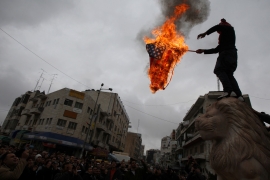 — While there was rejoicing in Cairo, concern was palpable in Israel over Hosni Mubarak’s stunning ouster from the presidency by pro-democracy demonstrators on Friday.

Israelis worry that transition in their southern neighbor will threaten the longstanding peace treaty with Cairo, a pillar of Israel’s regional posture.

”Israel hopes the transition to democracy will be without disruptions and without violence. The preponderant interest of Egypt and Israel is to preserve the peace treaty between them,” said state-run Israel Radio, quoting a senior official in response to Mubarak’s resignation.

Some analysts in Israel warn that Mubarak’s fall will be a negative turning point for the interests of Israel and the West on the grounds that his secular dictatorship will in the not too distant future be replaced by a religious one antithetical to the Jewish state.

The nightmare scenario for Israelis is that Egypt’s oldest and largest opposition group, the Muslim Brotherhood, will emerge victorious when parliamentary elections are held after an interim period.

The brotherhood, which was founded in 1928, has established its popularity through social and charity institutions and scored well in the 2005 parliamentary elections before the regime stepped in to limit its gains.

”If there is a free election I don’t see how they can be stopped,” said Eli Shaked, former Israeli ambassador to Egypt. The brotherhood’s success, he believes, would boost Muslim fundamentalists throughout the region, including in Jordan, where anti-government protests have flared, inspired by the anti-Mubarak demonstrations.

”The Muslim Brotherhood have already said they won’t be committed to the peace treaty. I don’t see a military conflict with Israel. But the whole regional order of the last 30 years will be totally shattered,” Shaked said.

”If the Muslim Brotherhood comes out so successfully in Egypt, it will boost other Muslim brotherhoods in Jordan and the West Bank. Then Jordan is in trouble, even Syria might find itself under threat. The domino effect might impact also on Saudi Arabia,” Shaked said.

But Haifa-based analyst Wadie Abu Nassar, head of the International Center for Consultations, believes that the Muslim Brotherhood would hesitate to negate the peace treaty with Israel because of Egypt’s dependence on aid and relations with the West.

”Egypt, unlike Iran, does not have economic independence,” Abu Nassar said. ”It depends on American aid, tourism and business with Europe. I’m not sure the first priority of the brotherhood would be to cancel the treaty with Israel.”

”The Muslim Brotherhood, if it comes to power, will prefer the Turkish model, not the Iranian. This means minimizing but not cutting ties with Israel,” Abu Nassar added.

Uri Dromi, former spokesman for Yitzhak Rabin, believes the army will not allow the brotherhood to gain power. ”I don’t see the military giving these people the chance to take over. I don’t think the people in Tahrir Square want an Islamic revolution.”

For Israelis, Mubarak has been absolutely crucial to their sense of regional stability. Through wars and uprisings Mubarak adhered to the peace treaty, chastising Arab radicals that there was no military option and that the days of Egypt warring with Israel were over. Egypt joined Israel in blockading the Gaza Strip in a bid to undermine its Hamas rulers and was a de facto ally against the spread of Iranian influence in the region.

There was rejoicing in the West Bank and Gaza last night at Mubarak’s downfall.

”People are happy he resigned because he took Israel’s side against us,” said Hani Masri, head of the Badael think-tank in Ramallah. They also despised the Mubarak regime for being oppressive and corrupt, he said.

Mubarak’s fall will force Palestinian President Mahmoud Abbas to be more responsive to his own public opinion, Masri added. ”It will be harder for him to go to negotiations and harder for him to make concessions” that go against the public will, he said.

Unlike the United States, Israel did not turn against Mubarak during the crisis. In fact, according to a Ha’aretz report, Israel called on the United States and Europe to curb their criticism of Mubarak ”in a bid to preserve stability in Egypt” and the wider Middle East.

Zvi Mazel, another former envoy to Cairo, said: ”We’re not against democracy in Egypt but we are really afraid and it is legitimate for us to say we are afraid of what will come out from this.”

Stability of moderate Jordan has also become a source of grave concern for Israel.

”Israel had several very important strategic foundations. One is the peace agreement with Egypt and the second are the relations with Jordan, the strategic partnership. There is now a concern that both of these will be overturned,” said Shlomo Brom, senior analyst at the National Institute for Security Studies in Tel Aviv.

Muslim Brotherhood ascendancy is something that would necessitate Israel viewing its southern front as an active military arena. If the Muslim Brotherhood emerges in power, then ”[t]he whole balance of the Middle East will change and Israel will have to invest a lot in building facilities to deal with Egypt,” said Yaacov Amidror, a retired major-general who was research chief for the Israeli army.

Jordan, traditionally a reliable ally against the common foe of Palestinian nationalism, is looking shaky these days. After several demonstrations inspired by the Egyptian protests, King Abdallah has appointed a new cabinet headed by the new Prime Minister Maarouf al-Bahit and charged it with rapidly undertaking ”reforms, modernization and development.”

”At the moment it looks as if the king is in control of the situation. But we’ve seen what’s been happening in recent weeks and we know the situation can change very quickly,” said Brom.

The turmoil started last month when protests against dictatorship, corruption, unemployment and income inequalities erupted in Tunisia that forced the ouster of long-time strong man Zine al-Abidine Ben Ali. Egyptians, emboldened by that, began mass street protests 18 days ago with the aim of forcing the departure of Mubarak.

In the view of Alon Liel, former director-general of the Israeli Foreign Ministry, the ouster of Mubarak will complete the ”encirclement” of Israel by hostile states in the region, taking it back decades to a posture of isolation.

It will push forward a process that has already seen Turkey change from an ally to an acrimonious rival, especially after last year’s storming of a Turkish ship bound for Gaza and the killing of nine activists.”Obviously it’s a completion of the encirclement of Israel and we are surrounded by countries now who will be more critical, some of them hostile,” said Liel.

”My guess is that Egypt will start behaving like Turkey is behaving,” he said. “They will not ruin the peace agreement with Israel but will be much more critical of Israel for not progressing on the peace track, especially the Palestinian track. They might pull the ambassador without breaking diplomatic relations. We have to get ready for moves from Cairo that will be a more true reflection of what the Egyptian public feels towards Israel.”

Israel, Liel says, is in its weakest regional position in decades. ”Even before the peace with Egypt we always had an anchor in Iran or Turkey. Now we are losing everybody. We don’t have Iran, we don’t have Turkey and if we don’t have Egypt, those are all the three main players. It was always very important to have at least one of them on our side. Now with encirclement we are being pushed back two to three decades to the feeling of core isolation.”