The skeleton of the famous Irish Giant Charles Byrne, who lived from 1761 to 1783, exhibited at the Hunterian Museum in London. 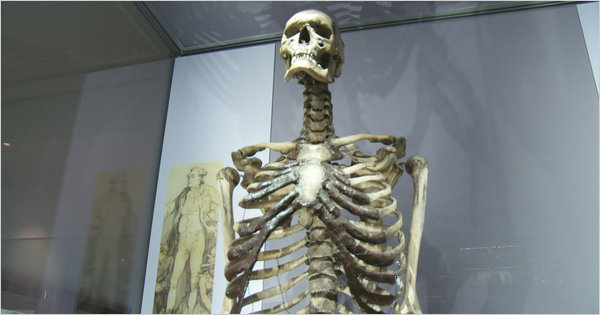 A giant of a man, 7 feet 7 inches tall, who left his home in Ireland when he was 19 and traveled to London to make his fortune as a freak. There Charles Byrne, known as the Irish Giant, garnered wealth and fame. But, suffering from tuberculosis and an excessive love of gin, he died a few years later, in 1783. A surgeon — John Hunter — bought Byrne’s corpse, boiled it in acid to remove the flesh, and exhibited the skeleton in his museum in London.

And there the bones remained, studied in 1909 by the renowned American surgeon Harvey Cushing, who removed the top of the skull and pronounced that Byrne had had a pituitary tumor. Other than that, Byrne remained a curiosity, a famous giant, the subject of a 2007 novel by the British writer Hilary Mantel, yet, with only a skeleton remaining, of little interest to science.

Until now: researchers in Britain and Germany, following a hunch about his disease, have extracted DNA from Byrne’s teeth and solved the mystery of his excessive height.

It turned out to be a rare and mysterious gene mutation, discovered only in 2006. Then researchers found the mutation in four families from Northern Ireland, near where Charles Byrne was born. Following a hunch, they decided to ask whether Byrne had had the mutation too and whether the mutation indicated that the four families were related to him.

Their hunch was right.

The group, led by Dr. Marta Korbonits, professor of endocrinology and metabolism at Barts and the London School of Medicine and Dentistry, reports its finding in Thursday’s issue of The New England Journal of Medicine.

Symptom-producing pituitary tumors are rare, and those caused by an inherited mutated gene are rarer still. At most only 5 percent of people with them have pituitary adenomas — tumors — in their families.

The tumors can lead to disfigurement — patients develop a bulging forehead and large jaw, hands and feet — and chronic severe headaches. They can also cause visual problems, because the tumor presses on the optic nerve. They may even cause milk secretion, because the tumor can secrete prolactin, a hormone that is needed for fertility and to produce milk in the breasts.

Usually, tumors that secrete growth hormone start to grow in adulthood, after people have reached their full height. But when tumors start growing in children or adolescents — as they do with many patients with the mutated gene — they can result in gigantism because they make the gland churn out growth hormone, prodding bones to keep growing.

Pituitary tumors are of great interest to researchers because they grow very slowly and almost never spread elsewhere in the body.

Dr. Shlomo Melmed, a pituitary tumor researcher at Cedars-Sinai Medical Center in Los Angeles, explained that the tumor cells undergo premature aging. “We think it might be protective,” he said, a reason the tumor does not spread.

The involvement of the gene, known as AIP, in pituitary tumors is a surprise, researchers say. Mutations in the gene are associated with about 20 percent of inherited pituitary tumors when no other organ is involved. But it is not clear why mutations in this gene, which seems to be involved in metabolism — possibly to detoxify chemicals — can cause tumors or how these tumors form.

“There is nothing solid scientifically,” said Dr. Constantine Stratakis, a geneticist and pituitary tumor researcher who is the acting scientific director for the Division of Intramural Research in the National Institute of Child Health and Human Development.

And for unknown reasons, only about 30 percent of people with the mutated gene develop tumors.

In London, Dr. Korbonits said she had been well aware of the Irish Giant because her work focused on pituitary tumors. She suspected the giant might have had the AIP mutation when she saw a drawing of him standing with twin brothers who also were giants, who came from a nearby village, and who were said to be related to Byrne. That, she said, “suggested it was a genetic disease.”

And she had found the gene in members of four families from the same region of Ireland.

Dr. Korbonits wrote to the Hunterian Museum and asked to test the giant’s DNA, and then she and her colleagues removed two of his molars. She enlisted the help of an expert on ancient DNA, Joachim Burger of Gutenberg University in Mainz, Germany, to extract DNA from the giant’s teeth. She was worried that the DNA might be too degraded to analyze — after all, the giant’s corpse had been boiled in acid and then displayed in a museum for a couple of centuries.

“It was not clear at all that we would have suitable DNA,” Dr. Korbonits said. The DNA turned out to be broken in many pieces, but it could still be analyzed.

The investigators calculated that the giant and the four contemporary Irish families had a common ancestor who lived about 1,500 years ago. And, they report, there are probably 200 to 300 people living today who have inherited that same mutation.

One is Brendan Holland, a 58-year-old Irishman who sells mining equipment. He started growing excessively when he was 13, he said in a telephone interview.

“I kept growing and growing,” Mr. Holland said, eventually reaching a height of 6 feet 9 inches. As he grew, he said, he became less coordinated, developed frequent violent headaches and had sporadic episodes when he could not see. He had no idea what was wrong, but left school when he was 19, on the theory, he said, “that all that studying was giving me headaches.”

Finally, when Mr. Holland was 20 and living in London, an endocrinologist, Dr. G. Michael Besser at Barts and the London School of Medicine, figured out that Mr. Holland had a pituitary tumor. As soon as the tumor was destroyed with radiotherapy, Mr. Holland’s headaches disappeared and his growth hormone levels dropped to normal.

After the AIP gene mutation was discovered in 2006, Dr. Korbonits asked to test Mr. Holland to see if he had it. He did. Then, Mr. Holland said, she started suggesting he might be related to the giant.

“She was asking me pointed questions about where he lived and where I lived,” Mr. Holland said. “Then she said, ‘I think it is possible that you and this chap are related.’ ”

With the giant’s DNA analysis, it turned out that Dr. Korbonits was right.

Mr. Holland says he was touched thinking about the giant’s life, knowing how hard it is to be so tall and the subject of barbs and jeers.

The genetic analysis also had another effect, he said.

“I remember having a conversation with Dr. Besser when I was first diagnosed,” Mr. Holland said. “I said, ‘With eight children, why was I suffering from it and none of the others?’ He was very honest with me: He said they did not have a medical explanation.”

Now, at least, Mr. Holland has an explanation for his physical problems. And that helps, he said.

“I can only speak for myself,” he said, “but having a logical explanation helps me to come to terms with my condition.”

by Gina Kolata of the New York Times