A 75,000-year-old human settlement may lurk beneath the Persian Gulf 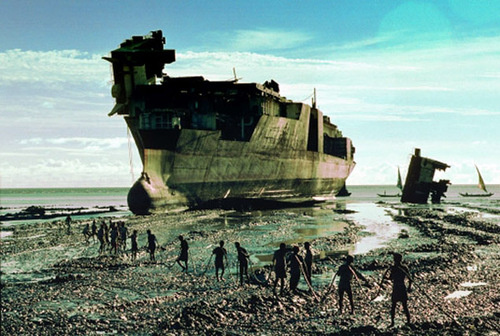 Evidence is mounting that the first human civilization outside of Africa probably evolved in what is now the Persian Gulf. Recent discoveries suggest that we’re about to find a fairly advanced civilization sunk beneath the waters of the Gulf.

Archaeologist Jeffrey Rose has published a paper in Current Anthropology where he argues that we’ll find some of the earliest human civilizations on Earth in what was once a fertile basin fed by clear streams and lush with greenery.

According to Live Science:

The Gulf Oasis would have been a shallow inland basin exposed from about 75,000 years ago until 8,000 years ago, forming the southern tip of the Fertile Crescent, according to historical sea-level records.

And it would have been an ideal refuge from the harsh deserts surrounding it, with fresh water supplied by the Tigris, Euphrates, Karun and Wadi Baton Rivers, as well as by upwelling springs, Rose said. And during the last ice age when conditions were at their driest, this basin would’ve been at its largest.

Then, about 8,000 years ago, melting ice sheets eventually led to a wetter climate that flooded the Persian Gulf basin. That is also the time when we begin to find incredibly well-developed civilizations on the Gulf shoreline – civilizations that seem to have sprung fully-formed, with advanced seafaring technologies, out of nowhere. Unless, of course, they came from sunken cities hidden beneath the Gulf waters.

The most definitive evidence of these human camps in the Gulf comes from a new archaeological site called Jebel Faya 1 within the Gulf basin that was discovered four years ago. There, Hans-Peter Uerpmann of the University of Tubingen in Germany found three different Paleolithic settlements occurring from about 125,000 to 25,000 years ago. That and other archaeological sites, Rose said, indicate “that early human groups were living around the Gulf basin throughout the Late Pleistocene.”

We’ll need underwater archaeologists to examine the Gulf more thoroughly to be sure that Rose’s theory is correct,

One Response to “Advanced Civilization beneath the Persian Gulf”