Yohsuke and Kumiko Itoh, with their 5-year-old daughter, Fumi, at Mochida Farms. They say Fumi has begun eating vegetables since they began farming on the weekends. 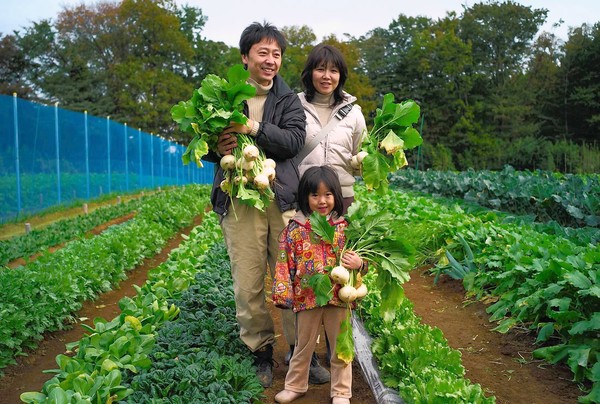 More city dwellers are renting plots of land in the city or in nearby rural areas, where they grow their own vegetables and fruit. Underlying the trend is the philosophy of jisan jisho, or ‘local food for local consumption.’

Mochida has divided some of his farmland on the outskirts of Yokohama into 8 feet by 40 feet plots, renting 70 of them to urbanites who come once a week to tend their crops.

For an annual fee of about $500 per parcel, Mochida shows the elderly couples and young families how to plant seeds twice a year and when to water and harvest. They take home their vegetables, and Mochida receives government subsidies to help pay for water, seeds and tools.

“I put more energy into this than my own crops,” he jokes.

The part-timers are engaged in what’s known here as shumatsu nogyo, or weekend farming. Their daily lives are firmly rooted in crowded cities. But with no yard of their own, they sign up instead at nearby farms that teach the basics of horticulture. The seasoned ones rent their own pint-sized plots in public-run gardens, known as shimin noen (“people’s farms”), on the fringes of Tokyo, Yokohama, Osaka and other cities.

For Yohsuke Itoh, his wife, Kumiko, and their 5-year-old daughter, Fumi, working in Mochida’s fields one day a week is the closest they come to the real thing. “Until we started coming in April, we had never spent a day on a farm,” says Itoh, a 43-year-old engineer at IBM Japan. “Our daughter loves coming out here.”

There are no reliable estimates of how many such farmers there are, but anecdotal evidence suggests that plenty of young city dwellers are taking up horticulture. Recently, Tokyo city government officials have been swamped with requests to rent 15 feet by 10 feet plots on public land in residential areas. “Applicants exceed the number of plots by 3 to 1, and many are young families,” says Nobuyoshi Kato, in the Nerima ward office.

The rise of the weekend farmers coincides with an urban agriculture craze that’s turning once-barren city rooftops and verandas into plush gardens.

Underlying the trend is the philosophy of jisan jisho. A Kyoto farm-rental company claims to have coined the phrase, often translated as “local food for local consumption,” which means to eat food that you grow yourself and has its roots in the local food movement.

One of the most influential books promoting part-time farming is Naoki Shiomi’s “Han No, Han X To lu Ikikata” (“Half Farmer, Half-X [Something Else Lifestyle]”). It details his decision to quit his job at an online retailer in the 1990s and divide his time between farming and environmental activism. Shiomi traces weekend farming to widespread food-safety concerns, following mad-cow disease outbreaks in Japan, the United States and Britain and the discovery in Japan of banned pesticides in dumplings from China.

“Most people are still interested in agriculture more from a food standpoint than as a life choice,” he says.

The urban farming boom is at odds with the plight of the country’s farmers. The sector has long suffered from high import tariffs, an outdated distribution system, and a lack of scale. Farms on this island nation average 4.7 acres, compared with 490 acres in the U.S.

With a youthful exodus to the cities, the average age of the country’s 2.6 million farmers is almost 66. “The reality is that many farmers are too old to tend to their own fields,” says Takanori Miyazaki, a journalist-turned-farmer who heads Food and Farm, a Tokyo-based nonprofit organization.

As of February, 979,000 acres, or 10% of Japan’s farmland, sat empty, according to Agriculture Ministry data. Dormant fields are a lost opportunity in a country where only about a third of the land is arable. That’s a headache for government officials who fret about a heavy dependence on food imports, and are now mulling whether to scrap protections for farmers in order to join a U.S.-backed free-trade zone along the Pacific.

Eager to put unused farmland to use, the government has offered subsidies to farmers who avail their fields and expertise to couples, families and schoolchildren.

Yokohama city officials say that farmers have been receptive to the urbanites. Mochida, the farmer in Yokohama, signed up two years ago. He and his 36-year-old son, Masayuki, own plots totaling 7 acres but don’t use all of it because it’s too scattered.

A few miles away, in a private rented field, Hideo Nokashi grows potatoes, herbs and leafy vegetables as a way “to unwind” on weekends. An intellectual property-rights lawyer, Nokashi says people like him are not so much interested in saving money as in getting the peace of mind that farming brings them after two decades of near-zero economic growth and job insecurity.

“It’s more convenient and cheaper to buy food in a supermarket,” Nokashi says. “But I know people who couldn’t be happier out here.”

“A lot of people are realizing that having a connection to their natural surroundings is more important than amassing material possessions,” he adds.

Back on the Mochida farm, about 70 people, in rubber boots and cotton gardening gloves, have turned out on a chilly but clear Saturday morning. They chat as they clear weeds and lug crates brimming with vegetables to cars parked nearby.

The Itohs rave about the experience. Their daughter Fumi used to prefer fast food, they say. “She eats vegetables now,” Yohsuke Itoh says, pointing to the youngster as she yanks up turnips.

Beyond the tasty rewards, their hobby has made them appreciate the work involved in growing produce. When they don’t spray pesticides, bugs wreak havoc on their patch. And even with Mochida’s expert guidance, they rarely grow vegetables as picture-perfect as those in Japan’s supermarkets.

Their first year ends in March. “I will be a farmer next season,” Itoh says.

Remembering our ancient connection to the land – that we are not separate from the Earth but are in fact embedded in our ecosystems; that we don’t have dominion or entitlement but are rather stewards of the natural environment of which we’re a part – is a key challenge we face on both sides of the Pacific.