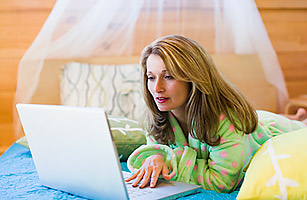 Fiffteen years ago if you went on an online dating site, you would be thought to have three heads,” says anthropologist Helen Fisher, author of Why Him? Why Her? and Why We Love. Make that four heads if you were middle-aged.

Yet today, it is Baby Boomers who are making the biggest splash in the online dating pool. At Match.com, the 50-to-65 age group is the online dating site’s fastest-growing demographic, up 89% in the last five years. And on JDate.com, the website for Jewish singles, members in the 50-plus age group jumped 40% in just one year, from 2008 to 2009. JDate’s parent company even has a site dedicated to the Boomer market, SingleSeniors

Just as Baby Boomers have lagged behind younger people in embracing the new technology, so have they been slower to dip their toe into the cyberspace dating waters. But now they are overcoming their fears. “‘Isn’t it dangerous going online?’ I hear this from the older set who aren’t quite as used to having their lives online as the younger generation is,” says Gian Gonzaga, senior director of research at eHarmony.com, which has also experienced a boost in interest from the 50-plus crowd. “Once you shove them out there, they adapt quickly. They remember what it’s like to have fun.”

The surge in popularity among middle-aged singles should come as no surprise. “I’ve always felt that online dating would be most popular among people who are 50 to 65,” says Fisher, a consultant to Match and its offshoot, Chemistry.com, “They know everyone in their family and social circles. Where are they going to meet people? They don’t have time to adopt new hobbies that are likely to introduce them to potential partners. And they are long past going to bars. In the old days we had different mechanisms, but those are gone.”

The new mechanisms are actually ideal for Boomers. “Many Boomer daters sign up for online dating post-divorce or after a long dating hiatus,” says JDate spokesperson Arielle Schechtman. “They are busy professionals, so being able to learn about potential dates online, on their own time schedules, makes online dating more valuable to them than to other age groups.”

Fisher also points out two important trends that are boosting the popularity of online dating among the older crowd. “Women are powering into the job market; they have more disposable income so they can walk out of bad marriages,” she says. “Also, with an aging population, we’ve got Viagra, and estrogen replacement. The expectation now is that older people are going to date, and remarry.” Indeed, according to one estimate, one in four second marriages for Boomers began online. (See “Seeking my Race-based Valentine Online.”)

Online dating is a natural for aging Baby Boomers precisely because they’ve been around the block a few times. (At Match, among the 50 to 65 demographic 71% are divorced and 11% are widowed.) “With age comes experience, so middle-aged daters can be a lot more savvy than younger daters in knowing what they want in a mate,” says Schechtman. Adds eHarmony’s Gonzaga, “Older singles also have a better perspective on their personal values and priorities in life. Experience from past relationships is a huge advantage for older singles who are looking to get into another long-term relationship.”

Boomers, moreover, often have a more open-minded view of potential partners, which is well suited to the online search process. “Older people are looking for a companion, a lifelong partner,” says Fisher. “They are not looking for a reproductive partner, so they can look at a broader range of individuals and are more likely to pick somebody from different social economic or religious backgrounds. They don’t have to bring this person home to mother anymore and explain why he’s Greek instead of Jewish.”

And with age comes a wider circle of connections. There are countless stories about Boomers bumping into someone online whom they knew in their early years. Jerry Brown, 60, a widower from Lake Forest, Calif., was pushed to start dating again by his daughters, who took his photo and wrote his online profile; soon he was perusing potential mates under the screen name Voltageman5050. (See “Online Dating Enters the Age of the iPad.”)

“After 20 minutes I came across a picture of someone eating a snow cone that looked very familiar,” he says. It turned out to be Patti Johns, or NursePatti659, Brown’s unrequited high school crush. “I sent her an e-mail with my phone number and said to hurry,” says Brown. But Johns, who was divorced and had been on Match for three years, took her time. “I knew the e-mail was from that guy who had a big crush on me 40 years ago,” she says. “So this is who the universe is giving me? I had blinders on when it came to Jerry.”

Those blinders melted away when Johns finally agreed to a date, and they stayed up talking until 2 a.m. Voltageman5050 and Nursepatti659 plan to marry this spring.