Muslim pilgrims pray on a rocky hill called the Mountain of Mercy, on the Plain of Arafat near Mecca, Saudi Arabia 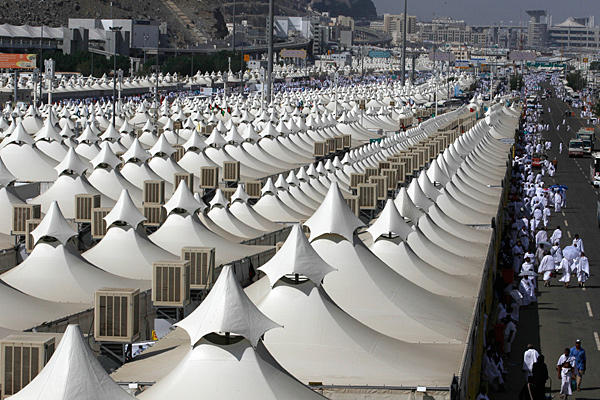 Two million Muslims have flocked to Saudi Arabia this week for the Hajj, the annual pilgrimage that Muslims are obligated to make at least once in their lifetime. Their destination is Mecca, Islam’s holiest city, and the pilgrimage is the fifth pillar of Islam, making it one of the religion’s chief obligations. The number of pilgrims that travel to Saudi Arabia every year have made the Hajj, which typically lasts five days, one of the greatest religious events in the world.?

For many Muslims, making the Hajj involves traveling long distances and incurring huge expenses. In India, the government has actually offered Hajj subsidies to airlines to offer discounted rates to Muslim pilgrims making the trip to Saudi Arabia, according to the Indian newspaper the Hindustan Times.

Once arriving in Saudi Arabia but before entering Mecca, all pilgrims must stop at a station outside the pilgrimage boundaries to cleanse, declare his intention to make the pilgrimage, and, if male, don ritual clothing known as Ihram. A pilgrim’s Hajj does not officially begin until they have completed these steps.

Once pilgrims are prepared, mentally and physically, for the hajj, they may enter Mecca and head to the Sacred Mosque. Their destination is the Kabah, the holiest site in Islam, located in the mosque. The pilgrims’ first act is the circling of the Kabah on foot seven times, known as the tawaf.

If it is possible to get close enough, they also are expected to kiss the Black Stone of the Kabah. This step of the pilgrimage is the most iconic, and the one that most people think of when they think of the Hajj – masses of people moving in a continuous circle around the tall, black Kabah.

Before ending the first day of the hajj, pilgrims travel between two nearby hills seven times, symbolizing Ishmael’s mother’s search for water in the desert.

The apex of the Hajj

On the second day of the Hajj, pilgrims arrive at Mt. Arafat, where they spend the day in prayer. The time spent here is most important part of the pilgrimage, and without it, a person’s pilgrimage is not considered complete. Mt. Arafat is the spot where Mohammed is believed to have made his final sermon. The pilgrims remain there until sunset.
At sunset, they set out on foot again, this time to Muzdalifah, where they spend the night and may begin collecting pebbles needed for the next day’s rituals.

The pilgrims return to Mina, a village outside Mecca, for another important step of the Hajj: stoning the devil. The pilgrims will launch several of the pebbles they collected at a stone pillar that symbolizes the devil.

After the stoning, the pilgrims are supposed to perform an animal sacrifice (nowadays often performed by someone else who the pilgrim pays to do the sacrifice) and, following that, a symbolic cutting of the hair. Some men will completely shave their head.

Before the end of the Hajj, pilgrims will repeat the process of stoning the devil, this time by throwing stones at all three pillars in Mina. They will also complete another circuit of the Kabah. 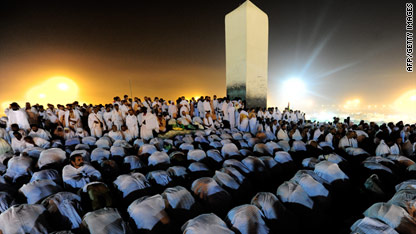 Pilgrims are forbidden from doing many things that are normally permitted.

Aside from the ritual cutting of hair and any grooming that is done during the ritual preparation before entering Mecca, pilgrims may not shave or cut their nails and men may not wear sewn clothes. Women may not cover their faces, even if they would do that in their home country. No colognes or perfumes can be worn.